By Amy Lamare on February 14, 2019 in Articles › Billionaire News

Mukesh and Anil Ambani are billionaire brothers. Just two years apart, they grew up being groomed to take over the company their father built, Reliance Industries. Reliance Industries first exported spices to Yemen, then entered the yarn business. For years, Mukesh and Anil ran Reliance side-by-side. Then, in 2002, the Ambani brothers' father, Dhirubhai Ambani, had a stroke and died. He did not leave a will. A war erupted between Mukesh and his brother Anil over Reliance Industries. The fight over Reliance would last several years until their mother Kokilaben intervened and brokered peace. The resulting agreement gave Anil control of all of Reliance's telecommunications, asset management and entertainment. Mukesh was given the company's oil, textile and refining assets.

Today, the divide between the Ambani brothers remains. But one of them is doing considerably better than the other – about $40 billion better. Mukesh Ambani has a $40 billion fortune. His little brother Anil Ambani, just $1.5 billion.

Now, Mukesh has the hottest and fasting growing mobile telecommunications business in India and Anil's wireless business has filed for bankruptcy. Wait, what? That's right, Anil was given the telecommunications unit of the family business. A non-compete clause between the brothers kept Mukesh out of telecoms until the agreement was scrapped in 2010. 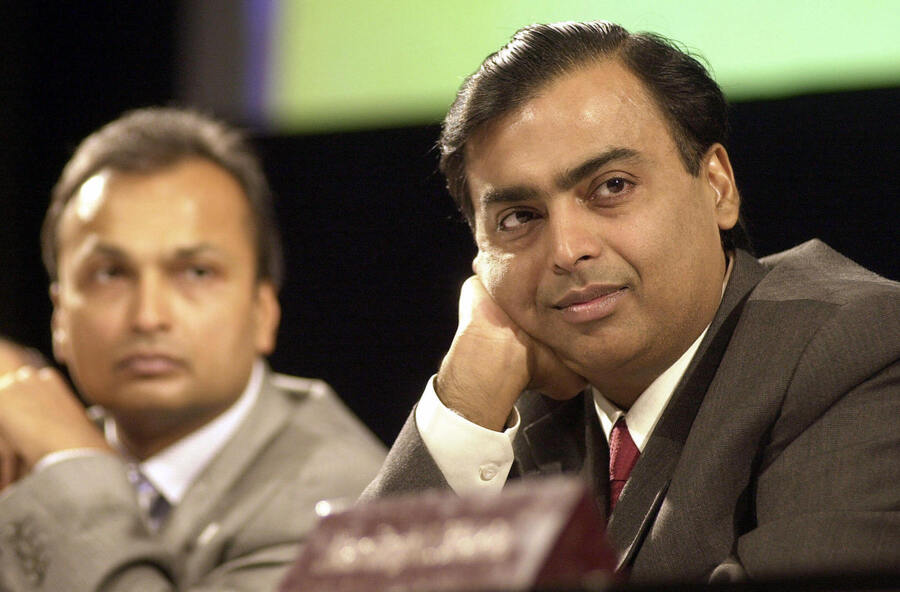 Mukesh has been the driving force behind a push to bring India into the 21st century in its telecommunications industry. Mukesh has spent $35 billion of Reliance's money to bring the first all 4G wireless network to India, called Reliance Jio. This allows him to offer free phone calls and exceptionally inexpensive data and give 1.3 billion people access to global tech and ecommerce giants. This relatively simple act has upended the telecom industry in India and sent his competitors into a tailspin trying to keep up or die trying – including his own brother.

Anil Ambani's Reliance Communications Ltd. has 270 days to repay debt or liquidate. Anil has been selling off assets to satisfy investor worries about the debt load of his companies that has contributed to the decline in share prices. Like many Indian businesses, Anil's companies took on debt to finance growth. This borrowing spree by Anil and other business owners has led India's banks to have one of the worst bad loan ratios in the world. When the central bank of India started cracking down on the $210 billion of debt, companies who had highly leveraged themselves found themselves in trouble, including Anil Ambani.

Now Mukesh has more leverage in buying the assets of his brother's company – a company whose failure he helped hasten when he started his mobile phone company. He will be attempting to acquire Anil's wireless carrier assets.

Other parts of Anil's empire have also taken a hit. Reliance Capital Ltd. is down 20% to the lowest price since June 2005. Reliance Power Ltd. plunged 35% to a record low, and Reliance Naval and Engineering is down 15% for its lowest share price ever.