By Brian Warner on August 9, 2018 in Articles › Billionaire News

What would you do for fun if you were a multi-billionaire? A lot of people joke that they'd party in Las Vegas with a suitcase full of drugs and a sexy younger girlfriend/boyfriend. Sounds pretty fun, huh? In reality, most people would probably take luxurious but fairly conservative vacations to places like the Maldives or Tahiti. No drugs. Maybe some very expensive wine and liquor. And, sure, maybe a younger companion. Well, as you are about to learn, Henry Nicholas III is not most people…

On Tuesday night at around 10pm, security at Las Vegas' Encore hotel were called to help a guest access his suite after he had been locked out. That guest was 59 year-old Henry Nicholas, the co-founder of semi-conductor power house Broadcom. Henry Nicholas has a net worth of $3.6 billion.

Upon entering the room, hotel security saw an unresponsive female with a semi-deflated balloon in her mouth. I'm not super experienced in the drug world, but I assume that's some sort of paraphernalia, and she wasn't making balloon animals.

Paramedics were called and successfully revived the woman, who would be later identified as Ashley Fargo.

Fun side note, Ashley's ex-husband is a video game entrepreneur named Brian Fargo. He is also an heir to the family that created both Wells Fargo AND American Express. They reportedly divorced after he caught her cheating.

Upon the discovery of the drugs, Vegas PD was called and Ashley and Henry were arrested and booked on felony drug trafficking charges. Their suitcases contained MDMA, Meth, cocaine AND heroin. Yikes.

Here are their mugshots: 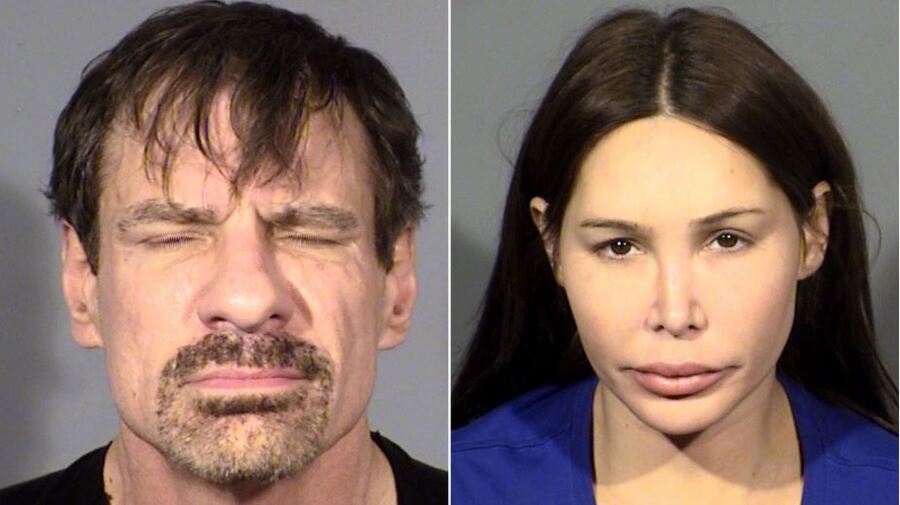 This isn't Henry's first time in a controversial spotlight.

Henry and a friend named Henry Samueli co-founded Broadcom in 1991 with $10,000 of their own money. Broadcom would eventually manufacture the computer chips that enable voice, video, data and other multi-media to travel at very high speeds. Their chips were nothing short of revolutionary. They took their company public in 1998, right smack dab in the middle of the original dotcom frenzy. Broadcom was one of the fastest companies in history to reach $1 billion in annual revenue.

At the peak of the dotcom bubble, the two Henrys were both worth $10 billion. After the market crashed, their fortunes sank substantially, but both today are worth a very respectable $3.6 billion.

Henry Samueli used his fortune to buy the Anaheim Ducks and fund a number of philanthropies. Henry Nicholas also made some major contributions to charity… but his extracurricular activities received far more headlines.

In the early 2000s, Nicholas spent $30 million remodeling a mansion in Southern California. As part of that remodel, he intended to build an underground man cave that some would later describe as a sex dungeon. When neighbors caught wind of his sex dungeon plans, they protested. As a result, Henry bought a nearby abandoned warehouse and turned it into his private drug and ex club. He called his club "The Pond."

According to private accounts and police reports, Henry hosted wild parties at The Pond. Parties that were filled with drugs and prostitutes. He essentially treated the place as his personal brothel.

In May 2002, Henry's wife Stacey drove over to The Pond and caught Nicholas red-handed cheating on her with a prostitute. Henry was also reportedly sky-high on drugs.  Stacey immediately filed for divorce.

Nicholas stepped down as CEO of Broadcom in 2003, ostensibly to work on his marriage and family life. Around the same time law enforcement was circling to hold him accountable for a number of charges. He was accused of hosting a revolving parade of prostitutes, spiking of clients' drinks with Ecstasy, and most importantly: Backdating stock prices.

When it was all said and done, most of the charges against Henry Nicholas were dropped, but not after his reputation was dragged through the mud. In April 2008 he entered a drug treatment facility. He spent much of the last decade keeping a low profile. He focused on philanthropy and his own sobriety. It appears he now needs to get that sobriety back on track.

BTW, this is the second billionaire in a week to be arrested for drugs. NASCAR CEO Brian France was arrested just last week. What's going on billionaires? Get your stuff together!