By Brian Warner on June 5, 2020 in Articles › Billionaire News

One of the biggest complaints people had about Michael Jordan during his peak professional days was that he did not use his position and power, as arguably the most famous person on the planet, to support various social causes. Michael had the potential for unimaginable influence through his celebrity. He also had the potential for enormous corporate influence through relationships with companies like Nike and Gatorade.

Should he have been vocal about racial causes? Should he have used that platform more directly to rally behind social injustices? What change could he have effected had he been more like LeBron James, who has certainly never shied away from a cause?

Jordan is very aware of this criticism. In recent years he has started to take minor steps to correct his former lack of action. And today he made a MAJOR step. Actually, $100,000,000 steps.

The most infamous Jordan-staying-quiet example came in 1990 when African-American politician Harvey Gantt was running for Senate in North Carolina against known-racist incumbent, Jesse Helms. Jordan, who was raised in North Carolina and went to UNC, chose not to publicly support the candidate. Even Michael's mother asked him him to make a public endorsement of Gantt. Michael decided that wasn't appropriate and instead quietly sent Gantt a check for $2,000, the maximum allowable donation for an individual. A nice gesture, but certainly not what Gantt really needed from MJ at that moment.

When asked about his decision, Michael jokingly explained that he didn't want to endorse Gantt because "Republicans buy sneakers, too".

In "The Last Dance" documentary, Jordan claimed that his quote was taken out of context. He claimed to have said that as a throwaway joke to make his teammates laugh. And then it got amplified over and over as if that was the gospel truth of what he felt.

Harvey Gantt lost the race and Jesse Helms would go on to serve in the Senate for 23 more years until his retirement in 2003.

Regardless of context, that quote about Republicans and sneakers would haunt Michael for decades. 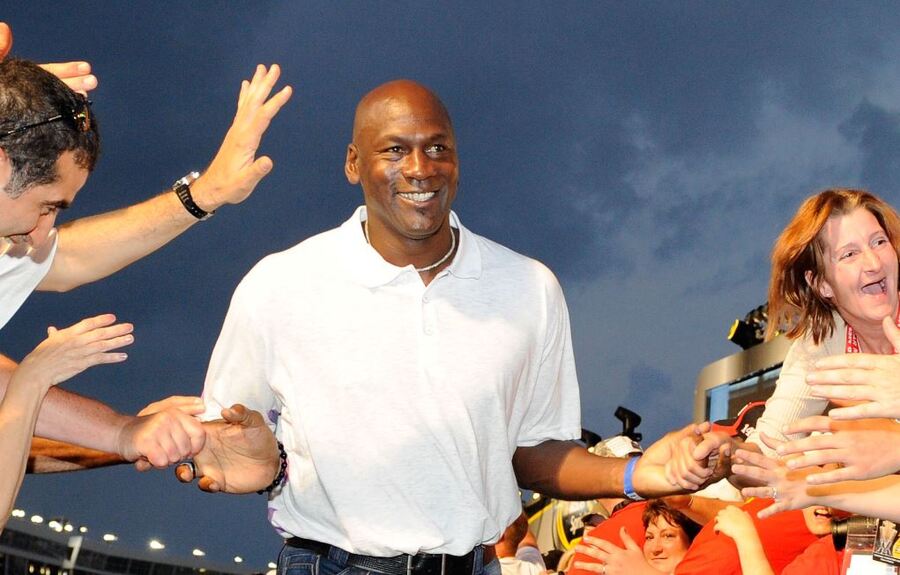 A year after the race, NFL superstar Jim Brown said that Michael's "main concern is the demands of corporate America [and that he] is not being a role model [for blacks] in the proper way."

After Jim Brown launched his criticism, Michael said the following in regards to the beating of Rodney King and race riots around the country:

"Naturally when things like [the riot] happen and I'm asked to comment on it, people tend to expect me to do more, be more opinionated, more vocal. The cry now from Jim Brown is to be more vocal. But they make it sound like Magic Johnson and myself are the only wealthy black people in America. Where are the Eddie Murphys? Where are the Arsenio Halls? Where are the Bill Cosbys, these type of people?"

Kareem Abdul-Jabbar would later tell NPR that Michael chose "commerce over conscience. It's unfortunate for him, but he's gotta live with it."

In recent years Michael, who has a net worth of $2.2 billion, has started to make up for this long-perceived shortcoming.

In July 2016, in the wake of a number of police-involved killings of African Americans, Michael announced a $2 million donation while releasing a statement titled: "I Can No Longer Stay Silent".

Here are some highlights from that statement:

"As a proud American, a father who lost his own dad in a senseless act of violence, and a black man, I have been deeply troubled by the deaths of African-Americans at the hands of law enforcement and angered by the cowardly and hateful targeting and killing of police officers…

"… To support that effort, I am making contributions of $1 million each to two organizations, the International Association of Chiefs of Police's newly established Institute for Community-Police Relations and the NAACP Legal Defense Fund. The Institute for Community-Police Relations' policy and oversight work is focused on building trust and promoting best practices in community policing. My donation to the NAACP Legal Defense Fund, the nation's oldest civil rights law organization, will support its ongoing work in support of reforms that will build trust and respect between communities and law enforcement. Although I know these contributions alone are not enough to solve the problem, I hope the resources will help both organizations make a positive difference."

Today Michael made a massive step forward in his goal of righting previous wrongs. Today Michael and the Jordan Brand announced it will donate $100 million over the next 10 years to "organizations dedicated to supporting ensuring racial equality, social justice and greater access to education."

Here is the full statement released by Estee Portnoy, Michael's manager and spokeswoman: 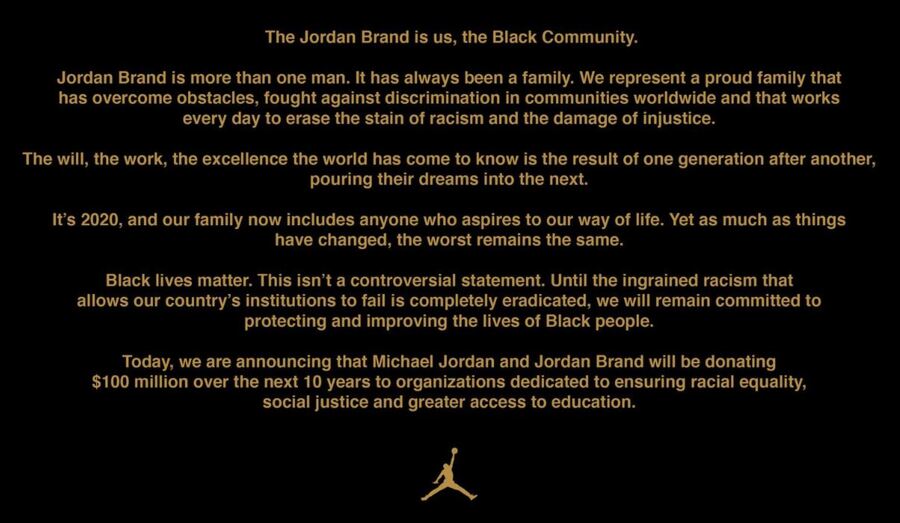 Major respect to Michael for this announcement.

It's never too late to make a difference. Maybe now is the best time in his life to focus on social change. During his playing days he wouldn't have had nearly as much energy or bandwidth. If there's one thing I learned from "The Last Dance", it's that once Michael has an enemy, he destroys it completely. Let's all hope that Michael makes racial and social injustice his enemy.