By Joseph Gibson on June 11, 2017 in Articles › Billionaire News

When President Donald Trump announced his decision to pull the United States out of the Paris Climate Accord, he did so in the face of severe criticism from both environmental and business interests. Trump's decision represents the actions of the United States federal government, but billionaire philanthropist Michael Bloomberg made it clear that it did not represent the people of the US as a whole. To that end, Bloomberg has pledged $15 million of his own money to support the UN Framework Convention on Climate Change Executive Secretariat, which includes "work to help countries implement their commitments under the 2015 Paris Agreement on climate change," according to a statement from Bloomberg Philanthropies.

The $15 million pledge would act as a substitute for funding from the US, likely to be discontinued by the Trump administration. In addition to the financial pledge, Bloomberg also made a quick trip to Paris in light of Trump's announcement, in order to meet with French President Emmanuel Macron to discuss more grassroots alternatives to the US government's commitment to fighting climate change. Bloomberg has with him a bipartisan coalition of business people, mayors, and governors throughout the United States who are willing to uphold the terms of the Paris Climate Accord, whether the government is a part of it or not. At a press conference outside the Élysée Palace in Paris, Bloomberg characterized their efforts like this, according to French news agency AFP:

"Today I want the world to know the US will meet our Paris commitment, and through a partnership among cities, states, and businesses, we will seek to remain part of the Paris agreement process. The American government may have pulled out of the agreement, but the American people remain committed to it. We will meet our targets." 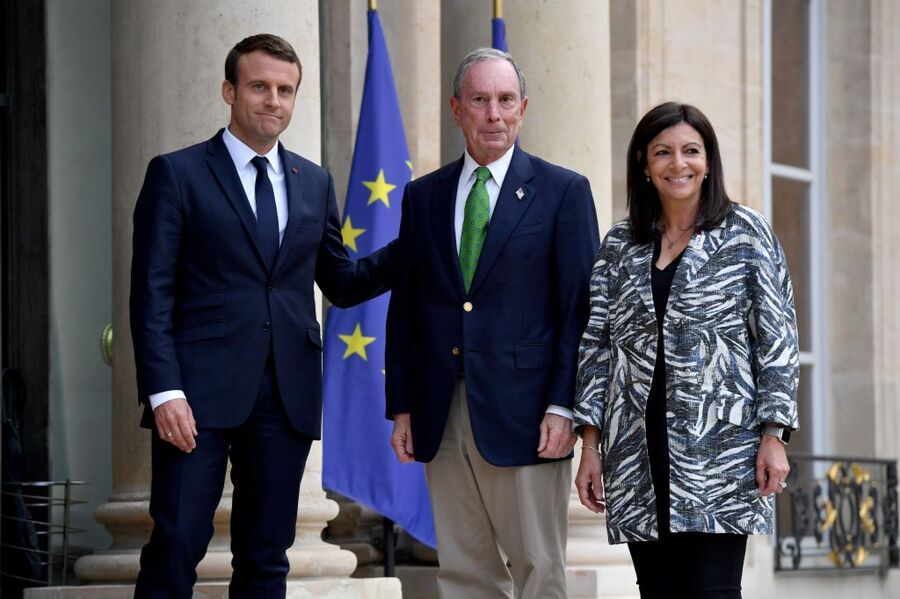 The pledge is just one of many projects Bloomberg is involved in to combat climate change – he's also president of the C40 Cities Climate Leadership Group, a group of 90 cities worldwide committed to reducing carbon emissions that cause global warming and preparing defenses for future warming-related events.