By Amy Lamare on November 26, 2018 in Articles › Billionaire News

Two men are transforming the fashion industry. Tommy Hilfiger, Jimmy Choo, Michael Kors, and Versace are all owned or have been owned in the past by Silas Chou and Lawrence Stroll. Chou and Stroll met through their fathers and founded Sportswear Holdings in 1989 with the specific purpose of acquiring then-struggling Tommy Hilfiger. At the time, the brand was nothing. Chou and Stroll grew it into a global phenomenon. They sold Hilfiger in 2006 for $1.6 billion.

In 2002, Lawrence Stroll and Silas Chou signed a lease with Donald Trump for the first three floors of the corner of Trump Tower. They used that real estate to open up Asprey & Garrard's New York store in 2003.

In 2003, the duo bought 95% of Michael Kors for $100 million. Kors retained that 5% stake. They took Michael Kors public in 2011. By 2014, the company was doing $3.5 billion in revenue and $1 billion in profit and had a market cap of $20 billion. This gave Chou and Stroll each a net worth of $5 billion at the time. In the years since then, the stock has cooled a bit, but Chou and Stroll are still billionaires (as is Kors) with net worths of $2.7 billion. 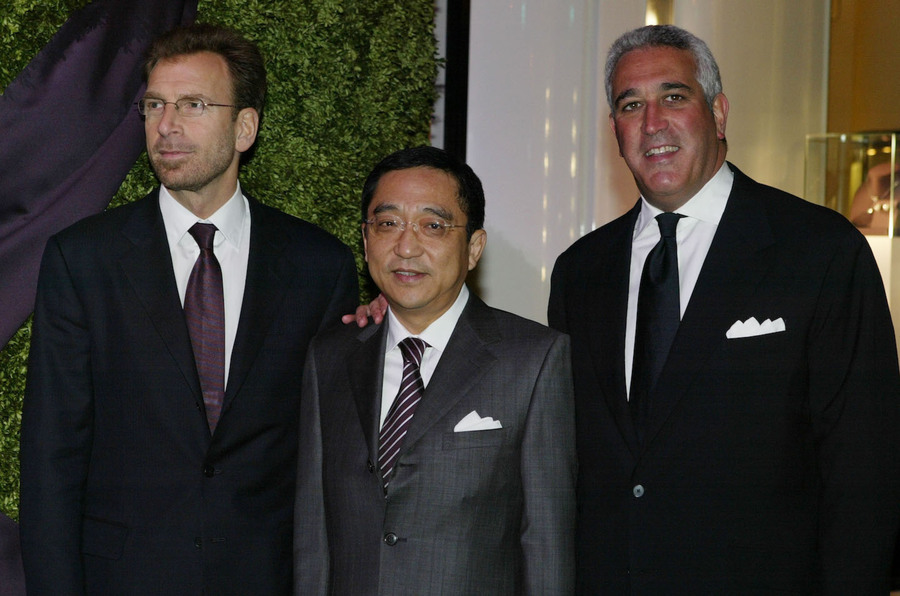 Silas Chou hails from Hong Kong. His family are renowned textile and apparel manufacturers. His father, also a billionaire, founded South Ocean Knitters, one of the Hong Kong's "largest knitwear manufacturers and exporters," in which he still owns a stake. In 1978, he and his father, founded Xiang Zhou Woollen Mills. Chou's apparel empire includes extensive textile mills, denim plants and design factories located in China, Vietnam and South Asia. He also launched Iconix China Group, which is run by his daughter Veronica. The company distributes fashion brands like Badgley Mischka and Ed Hardy in the country. He met Lawrence Stroll in 1989. Their fathers introduced them.

Lawrence Stroll is from Montreal, Quebec, Canada. Like Chou, his father was also in the apparel business. Stroll began his career with the Pierre Cardin line for women and children. He also brought Ralph Lauren's women's and children's lines to Canada and Europe. He met Chou in 1989. Lawrence Stroll has homes in London, Mont Tremblant, Westmount and Mustique, a private island in the Caribbean

Now, Chou and Stroll have purchased Versace for $2.2 billion. Founded in Milan in 1978 by Gianni Versace, the high-end label is famous for its bold designs and vibrant colors. Remember Liz Hurley's 1994 Oscar dress? It was black and held together with safety pins. It caused quite a stir. That was classic Gianni Versace.

Today, Versace is run by Gianni's family, including his sister Donatella. Prior to the sale, the Versace family owned 80% of the fashion house. Versace's CEO Jonathan Akeryod will keep his job, as will Donatella Versace. Chou and Stroll's holding company, which will be renamed Capri Holdings, plans to grow Versace's worldwide sales to $2 billion as well as grow its retail footprint by adding about 100 new stores to the brand's existing 200 stores. Capri Holdings also plans to increase the higher-margin accessories and footwear offerings from Versace to 60% of sales from 35%.