Meet The Members Of The Billionaire Space Club

Recently, Tesla and SpaceX billionaire, Elon Musk, sent his Falcon 9 rocket into space, achieved a suborbital flight, and landed his rocket back on terra firma, a first for his space exploration company. Amazon billionaire Jeff Bezos congratulated Musk on his achievement and welcomed him to the "club." But what is this club that Bezos speaks of? Why it is The Billionaire Space Club, of course! Let's meet a few  members of this exclusive club.

Elon Musk is chasing orbital spaceflight. His goal is to make humankind a multi-planet species. His SpaceX firm is just one part of the billionaire entrepreneur's portfolio. He also has electric luxury car company Tesla, solar energy exploration firm Solar City, high speed transit company Hyperloop, and his artificial intelligence brand OpenAI. It is not hard to see how all of these companies and their technology can advance Musk's space ambition.

In the near future, SpaceX is looking to develop technology to carry heavy national security payloads, take astronauts into orbit, and lay the foundation for missions to Mars.

Jeff Bezos is best known for founding Amazon. However, his space exploration company Blue Origin is the realization of a childhood dream. His big goal is to make flights to space affordable so that humans can move there. In fact, the reason Bezos founded Amazon and was driven to make it such a success is to fund his campaign for space travel.

Basically, Blue Origin is not a hobby, it is Bezos' passion. His rocket, New Shepard, is designed to carry tourists, payload, and researchers on short suborbital trips. The rocket is named after the late Original Seven astronaut Alan Shepard. The company is also working on rocket engines and orbital launch systems that would compete directly with SpaceX's equipment. Bezos also financed an expedition to recover the remains of the discarded first stages of Apollo 11 and a couple of others. Oh, and by the way, Bezos has way more money than Musk: $55 billion vs. $12.9 billion. 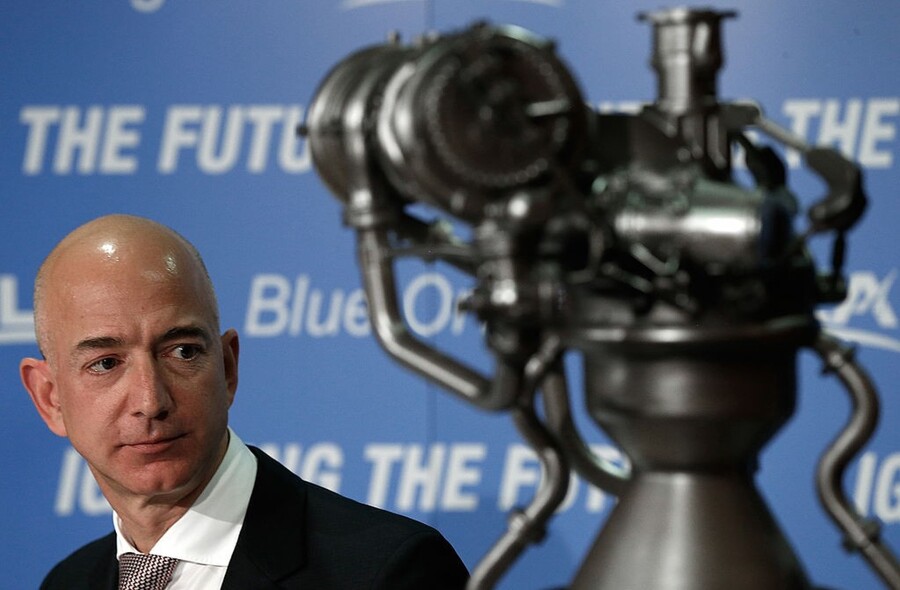 Richard Branson has founded many companies over his long and successful career. He also has his own dreams of spaceflight and is pursuing them through his space exploration company Virgin Galactic. He uses his $5.1 billion net worth to fund the company. Virgin Galactic suffered a major setback when its SpaceShipTwo broke up during a test flight. The co-pilot was killed and the pilot was injured. However, that hasn't dampened the spirits of Branson or people who want to go to space. A new SpaceShipTwo is being built and 700 people are on the waiting list for the test flight into space.

Paul Allen co-founded Microsoft and built a $17.4 billion fortune. Now he's turning some of his attention to space travel. His company financed the SpaceShipOne effort and won the $10 million Ansari X Prize in 2004. Allen sold the technology behind SpaceShipOne to Richard Branson. (Which then developed into SpaceShipTwo.)

These days, Allen's Vulcan Aerospace is building the world's biggest airplane. He intends for this plane to be used as a platform for orbital rocket launches.

Allen, Branson, Bezos, and Musk are the highest profile members of the Billionaire Space Club, but not the only ones. Other members include Google's Larry Page and Intentional Software's Charles Simonyi, who are behind the Redmond, Washington based asteroid mining company Planetary Resources. Budget Suites ff America founder Robert Bigelow is also in the race for space. His company, Bigelow Aerospace is working on space habitats. In fact, a prototype module is scheduled to be sent to the space station in February. It will be delivered by SpaceX's Dragon freighter.

Check us out, just casually discussing commercial space travel and stuff like it is no big deal! It is a truly cool time to be alive, people!