Meet The 6 Richest Women In India

We often write about the billionaires of India – especially Mukesh Ambani, who is not just the richest person in India, but the richest in all of Asia. Missing from these usual topics are the wealthy woman of India. As a whole, there are 106 billionaires in India – a country with a population of 1.4 billion people. Of those 106 Indian billionaires, six of them are women. It's time to get to know these movers and shakers.

Anu Aga started out in the Human Resources department of Thermax, the energy and environmental engineering company owned by her husband. She became the chairperson and head of the company after his death in 1996. She retired in 2004 and her daughter took over. She has a 62% stake in Thermax. In retirement, she is the chairperson of Teach for India. She is the 94th richest person in India and the 1,941st richest person in the world.

USV India is a pharmaceutical giant started by Lenna Tewari's father in 1961 in a partnership with Revlon. USV India specializes in drugs for diabetes and cardiovascular conditions. It has $449 million in annual revenue. She is the 71st -richest person in India and ranks 1,227 on the list of the richest billionaires in the world.

Smita Crishna-Godrej and her brothers each own a one-fifth stake in the family business. She is married to Bollywood star Vijay Crishna. She is the 838th-richest billionaire in the world.

Mallika Srinivasan is the CEO and Chairperson of the third-largest tractor maker in the world. She is the niece of the founder, who founded the company 81 years ago. She is a graduate of the Wharton School at the University of Pennsylvania. She is the 64th-richest person in India. 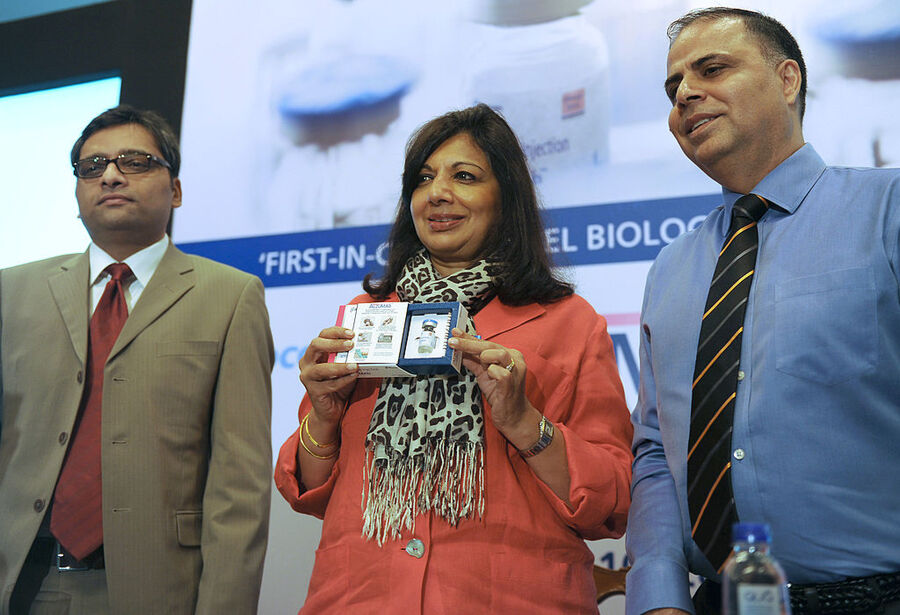 Kiran Mazumdar-Shaw has the distinction of being the richest self-made woman in India. In 1978, she founded the biopharmaceutical company Biocon. It is the largest biopharmaceutical company in India. Biocon was the first to get approval for two cancer drugs from the U.S. Food and Drug Administration. She also founded the Mazumdar Shaw Medical Center, which offers affordable cancer treatments to people who need it. She is the 54th richest person in India and the 617th richest billionaire in the world.

Savitri Jindal is the chairperson of The Jindal Group, which has interests in  the steel, power, cement, and infrastructure industries. Her husband founded the company and she took it over after he died. Under her leadership, company revenue quadrupled. She is the 20th-richest person in India and the 290th-richest billionaire in the world.