Meet Terry Gou: The Man Who Makes Your iPhone Affordable

By Amy Lamare on June 7, 2016 in Articles › Billionaire News

Terry Gou is a Taiwanese entrepreneur who founded Foxconn, a company that makes electronics for companies like Apple. Basically, he makes our iPhones affordable. He has factories all over the world (but mainly in mainland China) employs 1.2 million people, and his company had $139 billion in revenue last year. Foxconn is China's largest exporter. Now he's banking on a venerable household brand that has seen better days: Can he resurrect Sharp Electronics? Terry Gou has a net worth of $6.7 billion.

Terry Gou was born Guo Tai-ming in 1940, in Banqiao Township, Taipei, Taiwan. His parents had lived in China's Shanxi Province before fleeing to Taiwan in 1949. As the eldest child, Gou's focus was on education. After graduating from college, he worked in a rubber factory and a medicine plant. In 1974, when he was 24 years old, Gou founded Hon Hai (later renamed Foxconn) with $7,500 in startup money and 10 elderly employees. Hon Hai made plastic parts for television sets in a rented shed in a suburb of Taipei derisively referred to as "Dirt City." He hit the jackpot in 1980, when Atari contracted with his firm to make the console's joystick. 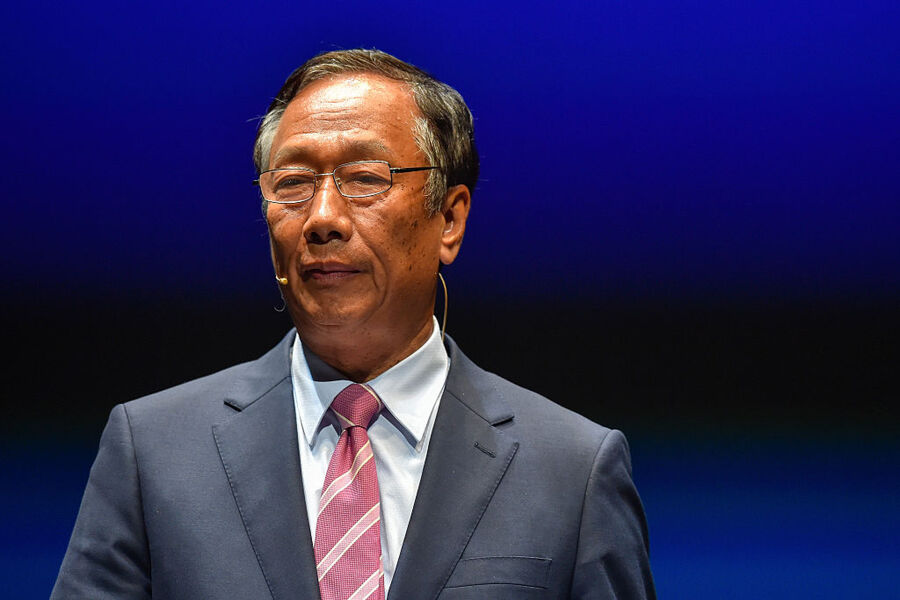 During the 1980s, Gou spent 11-months traveling the United States, looking for customers for his company. Guo took the unusual tactic of breaking into companies uninvited. Despite being removed by security on a number of occasions, his aggressive tactics paid off and he received a number of orders.

In 1988, Gou opened his first factory in Shenzhen in mainland China. To this day, that remains his largest factory. Foxconn had another breakthrough when Gou vertically integrated the assembly process and facilities for workers. The factory was turned into a massive campus that includes housing, dining, medical care, and burial for employees. There's even a chicken farm, to provide chicken for the cafeteria and karaoke bars. Additionally, Gou's workers earn a much higher wage than the industry average.

In 1996, Gou's company began building the chassis for Compaq desktops. This was a turning point that led Foxconn to build the bare bones chassis for HP, Dell, IBM, and Apple. It took just a few years for Foxconn to become one of the world's biggest consumer electronic manufacturers.

Foxconn's biggest success to-date was courting and securing a long term contract with Apple. The Cupertino-based company is responsible for more than a third of Foxconn's revenue. Gou has made major investments in recent years, including an announcement last November that it will build a new display plant in central China.

Now, Foxconn has purchased Sharp for $3.5 billion and must execute a strategic overhaul of the once venerable brand. Sharp expects an operating loss of $1.5 billion for the most recent fiscal year , due to very sluggish sales of its flat screen televisions.

Gou is very secretive and rarely speaks to the media. However, his acquisition of Sharp isn't as random as it would appear. Like everything Gou does, it is strategic. Very, very, strategic. Through Sharp, Gou sees a way to becoming the supplier of iPhone screens, which is the phone's most expensive component. It's not a secret that Apple wants to ditch LG. It's not a secret that Samsung is courting the business. However, Gou has proven himself to be a formidable, aggressive salesperson time and time again. Just ask Michael Dell.

In 1994, Gou began pursuing the Asia head of Dell Inc., Max Fang. Gou wanted to meet Michael Dell when he was visiting his China Dell facilities. Gou managed to take Dell on an unscheduled detour to his factory. Needless to say, Foxconn secured the Dell orders to make computer casings.

I wouldn't bet against Terry Gou when he sets his mind to something. After all, he started a global consumer electronics giant in a shed with $7,500 and 10 senior citizens as employees. Now, he has set his mind on Apple's iPhone displays.