By Amy Lamare on February 16, 2020 in Articles › Billionaire News

Did you happen to catch the very end of the Oscars when the diminutive Korean lady got on stage and started talking about how much she loves Parasite director Bong Joon Ho's hair? That wasn't a relative of his, that was Miky Lee, the head of a $4 billion South Korean entertainment empire that is responsible for everything from K-pop sensation BTS to the Oscar-winning film for Best Picture, Best Director, and Best International Film, Parasite. Lee built South Korea's first movie multiplex. She's an investor in DreamWorks. She had a hand in the success of BTS. She's the head of a $4.1 billion entertainment empire that has launched a generation of filmmakers including Parasite's Bong Joon Ho. She's also a major player in Los Angeles real estate. In short (pun intended), Miky Lee is a phenomenon! She is one of the most influential people in South Korean entertainment.

Parasite has been on a record-setting run. It was the first film from South Korea to win the coveted Palme d'Or at the Cannes Film Festival. It was the first foreign film to win the SAG Awards' ensemble award. Parasite is the first Oscar nominee from Korea. It is the first non-English language film to win the Best Picture Oscar in the 92-year history of the awards ceremony. On top of all of that, Lee runs CJ, her family company, which also controls the highest-rated cable network and the largest multiplex chain in South Korea. Lee is a media mogul running a $4.1 billion entertainment empire responsible for television dramas to K-pop concerts around the globe, to movies dominating the box office in Asia. 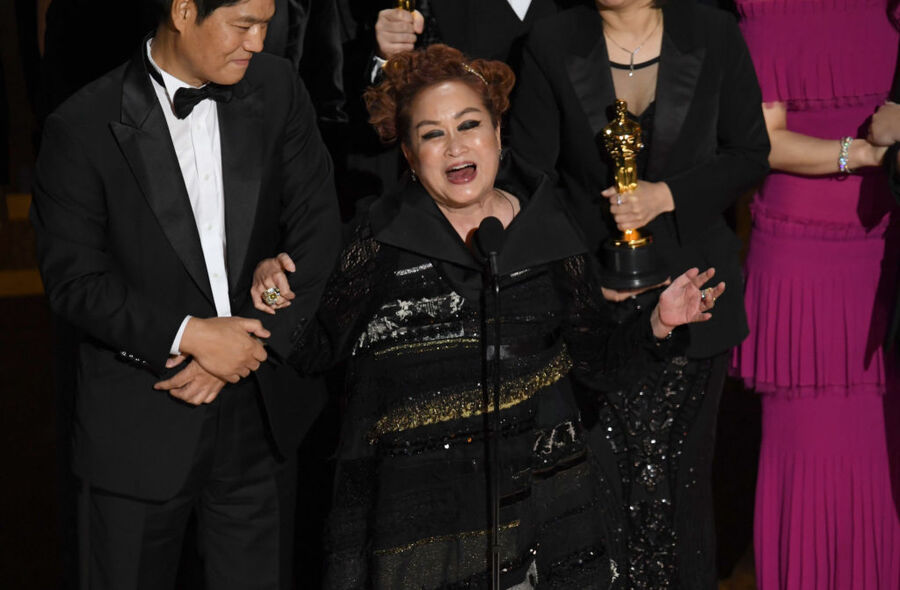 Lee is the eldest grandchild of Samsung founder Lee Byung-chul. She's a graduate of Harvard University. CJ, the family company, was founded in 1953 as a sugar and flour manufacturing division of his trading company, Samsung. Over the next four decades, the company expanded into biotech and pharmaceuticals. It did not, however, have anything to do with entertainment or the media. While Samsung was expanding, Lee was indulging her great love: cinema. She is a lifelong cinephile. She studied language and linguistics at the top universities in Korea, Taiwan, and Japan. She is fluent in Korean, English, Mandarin, and Japanese. She then went to Harvard for her master's degree in Asian studies. It was while at Harvard that Lee realized she wanted to introduce Korean culture to Korean American students, who she found, had completely assimilated to the ways of the West.

In 1987, Lee's grandfather died and the family-controlled conglomerate was divided up among his heirs. CJ Group was given to her brother Lee Jay-hyun. Miky had just graduated from Harvard and joined the Fort Lee, New Jersey office of Samsung where she worked in the new business division. In late 1994, she found out that David Geffen, Steven Spielberg, and Jeffrey Katzenberg were looking for investors to get their fledgling film studio off the ground. Lee met with them and was convinced. She gave the DreamWorks SKG founders a $300 million cash infusion. In exchange, she was given the distribution rights for DreamWorks films across Asia, but excluding Japan. This became an extremely lucrative investment for Lee.

Lee began to dream about what could be possible with Korean culture. In order to do that, CJ had to transform itself. To get into the media business, the company had to build Korea's entertainment industry from scratch. In the mid-90s, there were no multiplexes in Korea. There were just little video stores – not like Blockbuster – more like mom and pop video stores. Lee and her brother had to invest in cinema construction to grow the local film market as well as get and keep the attention of Hollywood. CJ opened the first multiplex in Korea in 1998. Today, it is the country's largest chain with about 50% of the market. Competitors cropped up and over the years, turned Korea into the fifth-biggest box office territory in the world.

From CJ's first movie theater, the company created a fund to support Korean filmmakers. This led to the rise of Korean filmmakers like Parasite's Bong. Lee also set out to turn K-pop into a globally popular genre. KCON was a K-pop convention that Lee dreamed up a decade ago, after attending a UFC convention. BTS played its second-ever U.S. show at 2014's KCON. More than a million people have attended the music and cultural festival in six countries.  Lee grew Korea's entertainment industry into a global cultural force. Her goal now is to expand CJ's worldwide influence.

Lee, 61, is divorced and has no children. She lives in Orange County and has an enormous compound in Beverly Hills. At about the same time as she made her $300 million investment into DreamWorks, she began construction on an enormous compound in Beverly Hills. The more than eight-acre estate is known as Futureland and was modeled after South Korea's largest theme park, Everland, which is owned by Samsung, of course. The property features two Mediterranean-style mansions. One is about 12,000 square feet and the other is 6,000 square feet. Both have infinity-edged swimming pools. There is a full-size tennis court on the roof of the smaller house. The property is protected by off-duty LAPD officers, has parking for 100 or more cars, golf putting greens, and sweeping views of the San Fernando Valley, Coldwater and Benedict canyons, and the Pacific Ocean.

Miky Lee holds dual American and South Korean citizenship. As a lifelong cinephile, her Oscar moment was a dream come true. With Parasite's Best Picture win, we expect to hear a lot more from this dynamo and her company.