Meet Jim Sinegal: The Billionaire Who Gave Us Costco

By Amy Lamare on November 7, 2020 in Articles › Billionaire News

Don't you just love Costco? Where else can you get a giant bottle of Vodka, a pie, a value pack of socks, 50 rolls of toilet paper, and a vat of red vines? And it's all such a deal! We have Seattle-based billionaire Jim Sinegal to thank for the value-laden warehouse store. Sinegal co-founded Costco with Seattle retailer Jeff Brotman in 1983. Sinegal turned Costco into one of the most popular discount warehouse stores in the U.S. Costco offers a wide range of services that span from selling fresh fruits to offering eye care, clinics, and pharmacies. Costco services also expand to gas stations, offering low-priced gas across the United States.

James Sinegal was born on January 1, 1936, into a working-class Catholic family in Pittsburgh. His family moved to San Diego while he was in high school and he graduated from Helix High School. He got his AA degree at San Diego City College and his BA from San Diego State University in 1959. While he was in college, he got a job as a grocery bagger at FedMart. He discovered that he loved the retail business. He worked his way up at FedMart to executive vice president of merchandising and operations. From 1977 to 1978 he was vice president of merchandising for Builders Emporium. He was an executive vice president with the Price Company from 1978 to 1979. He was the protégé of Sol Price, the father of the warehouse club store concept.

In 1983, he teamed up with Seattle-based attorney Jeff Brotman to found Costco. He was the company's president and CEO from 1983 until he retired. He traveled to each Costco location every year to inspect them personally. Costco was the first warehouse club to include fresh food, eye-clinics, pharmacies, and gas stations – all of which were Sinegal's ideas. Sinegal is known for a management style rooted in the belief that employees who are treated well will in turn treat customers well. Sinegal provides compensation and benefits for his employees that are significantly higher than the retail norm. Over 90% of Costco employees qualify for employer-sponsored health insurance. Costco has the lowest employee turnover rate in retail. One story that is often recounted about Sinegal is how, when he found out Costco was paying 88% of employee health care expenses when the company had committed to paying 90%, he reimbursed the employees for the extra 2% in the form of stock directly into their 401Ks so it wouldn't be taxed.

In 1993, the growing competition was threatening both Costco and Price Club. The two companies partially merged when Price's earnings dropped to 40%. The new company was renamed PriceCostco. It focused on international expansion and opened stores in Mexico, England, and South Korea. However, sales continued to drop. Sinegal and Robert Price had different ideas on how to run the company. The two companies went their separate ways in 1994. Sinegal changed the name of his company to Costco Wholesale in 1997. 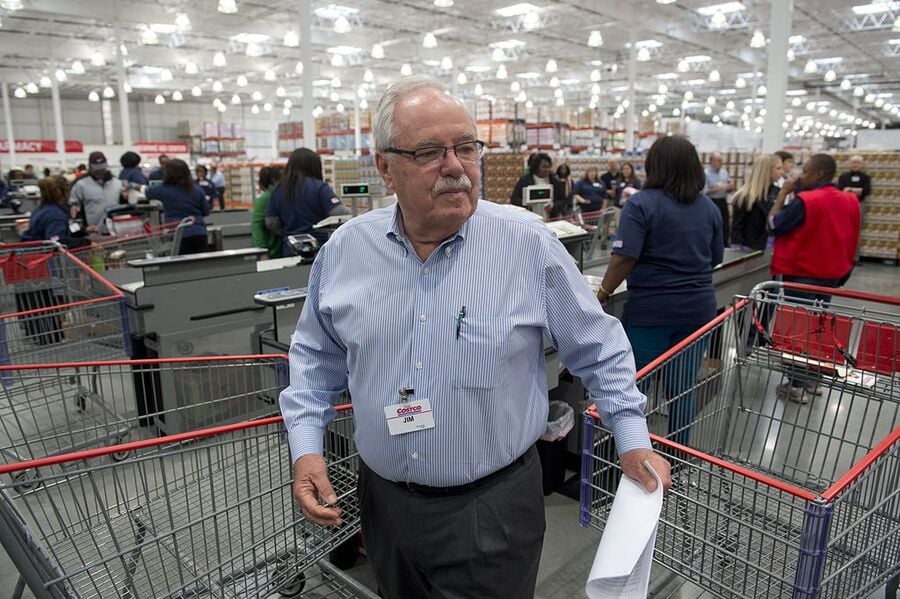 Sinegal is also obsessed with Costco's Kirkland products and wears clothes from that brand. Sinegal stepped down as the CEO of Costco on January 1, 2012, his 74th birthday. He stayed on as an advisor and member of the board of directors until 2018.

Sinegal and his wife Janet met in college at SDSU. They have three grown children. They live in a waterfront mansion on Lake Washington where their neighbors include Steve Ballmer and John Nordstrom.