By Amy Lamare on April 1, 2016 in Articles › Billionaire News

Remember when that drone crash-landed on the White House lawn and nearly caused an international incident back in December? Frank Wang built that drone. In fact, he invented that drone and is the leading drone manufacturer in the world. He also built the drone that a protester used in February to land a bottle of radioactive waste on the roof of the office of Japan's Prime Minister, and also the one a smuggler used to fly drugs, weapons, and a cell phone into a prison courtyard near London. This is all in a day's work for the 34-year-old mastermind driving the drone revolution.

Frank Wang founded Dajiang Innovation Technology Co. (DJI), which accounts for 70% of the consumer drone market. After the White House incident, his company spent the next morning developing a software update to send out to all of its drones that would make it impossible for them to fly within a 15 ½ mile radius centered on downtown Washington, D.C. Like we said, it is all in a day's work. 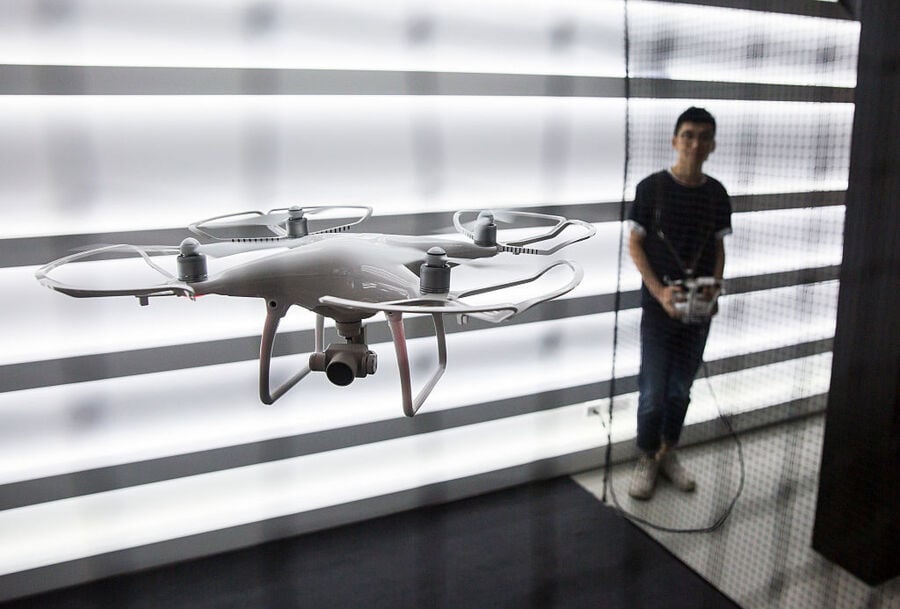 Wang launched DJI out of his dorm room in Hong Kong in 2006. Now he is on a mission to make his company as successful as other top Chinese companies, like smartphone manufacturer Xiaomi and e-commerce website Alibaba. However, unlike those two examples, DJI is poised to be the first Chinese company to lead its industry.

Wang was born in 1980 and grew up in Hangzhou on China's central coast. His love of things that fly started when he was in elementary school, when he became obsessed with a comic book about the adventures of a red helicopter. He wasn't a strong student and preferred reading about model airplanes to studying. He dreamed of going to college at an elite American university, but was rejected by MIT and Stanford. Instead, he enrolled at the Hong Kong University of Science & Technology, where he studied electronic engineering. He focused his senior project on building a helicopter flight control system. Wang skipped classes and stayed up until 5am to build his final group project. When he gave the presentation, the hovering function for the onboard computer failed – but his effort was not in vain. A robotics professor noticed the level of leadership and technical understanding Wang exhibited and invited him to the university's graduate program.

In 2006, Wang moved his fledgling company out of his dorm room and into the city of Shenzhen. They worked out of a three-bedroom apartment. Wang financed the early days of DJI with what was left of his college scholarship. At the time, DJI's product sold for $6,000 to state-owned power companies and Chinese universities. Also at that time, Wang didn't realize how big the drone market could be, or how much he could reduce the cost of manufacturing his product.

But by the end of 2012, Wang had pulled all of the pieces together for a complete drone package and the company debuted the Phantom in January 2013. The Phantom is the first ready-to-fly, preassembled drone. It costs $679. Before the company's Phantom drone hit the market, people who wanted a drone had to build one themselves, to the tune of thousands of dollars.

At first, DJI planned to just break even on the Phantom's retail price. Wang made an entry-level product to prevent his competitors from getting into a price war. What Wang didn't anticipate was that the Phantom would quickly become DJI's best selling product. The Phantom increased DJI's revenue fivefold. It sells equally well around the world, with 30% of revenue from the U.S., 30% from Europe and 30% from Asia, and the remaining 10% from Latin America and Africa.

It is rare for a company to come along and dominate a market at just the time it makes the transition from hobbyist to mainstream. Kodak did that with film cameras. Dell and Compaq were ahead of the curve with PCs. GoPro did it with action cameras. And DJI has done it with drones. People laughed at Amazon's Jeff Bezos and his plans to have drones deliver packages, but it is a fact that drones have entered the mainstream. Drones were used to broadcast live footage at the Golden Globes this year. In Nepal, relief workers used them to map out the devastation caused by April's 7.8-magnitude earthquake. Facebook plans to use drones to provide Wi-Fi to rural African communities. Hollywood has even gone crazy for drones – they are being used on the sets of Game of Thrones and Star Wars.

Of course, DJI faces both competition and the interference of the Federal Aviation Administration. The FAA currently has a blanket ban in place on the commercial use of small drones. The agency has been very slow to put in place any real policy regarding the use of drones. Wang's chief competitors include Berkeley, CA based 3D Robotics, staffed by many former DJI employees, French drone maker Parrot, which sold more than $90 million worth of drones in 2014, as well as a slew of Chinese competitors looking to chip away at Wang's dominance in the industry.

In 2015, DJI sold roughly 400,000 drones – many of which were its entry level Phantom model. The company is on track to sell more than $1 billion in 2016, which translates to about $120 million in profit. Sales of DJI's drones have either tripled or quadrupled every year from 2009 to 2014. DJI began the drone revolution. Everyone else is just trying to catch up. Frank Wang has a net worth of $4.5 billion.