Masayoshi Son has just closed the first round of a massive investment fund that is slated to be worth up to $100 billion. Son's SoftBank Group Corporation gathered money from Saudi Arabia, Abu Dhabi, Apple Incorporated, and Qualcomm Incorporated to create the Vision Fund. This huge sum is unprecedented in the world of private equity and venture capital – the equivalent of four Silver Lake or 15 Sequoia Capitals.

It's not a surprising move for Son, who has unironically claimed to have a 300-year long vision for SoftBank that positions them as the world's most valuable company. With the Vision Fund, Son is attempting to become the biggest investor in technology over the next decade. He's ready to make huge investments into artificial intelligence, connected devices, satellites, and human-computer interaction. He's already led an enormous $5.5 billion investment into Chinese ridesharing company Didi Chuxing, the largest venture investment on record.

Son's supporters have extremely deep pockets, like Saudi Deputy Crown Prince Mohammed bin Salman, who wrote a $45 billion check to become a cornerstone investor. Besides Apple and Qualcomm, Foxconn Technology Group and Sharp Corporation are also putting in money, with a total of $93 billion in committed capital. It aims to reach $100 billion within six months. 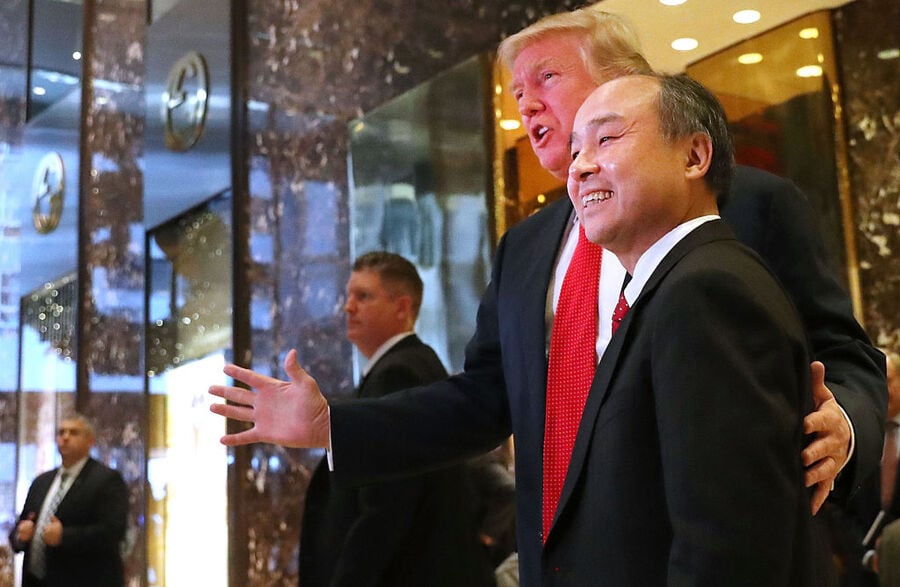 Market experts are concerned that Son's mega-fund will unleash a torrent of cash into sectors that are already overcapitalized. Already, they feel that there are too many dollars and too few recipients. It's becoming a mirror of the late 90s dot-com era when money poured into internet companies up until the market crashed. Other private equity firms are sitting on massive amounts of cash, with $820 billion in unspent money in private equity funds at the end of last year, up from a total of $755 a year previous. The venture total hit $142 billion last year.

Son's huge investments may be fueling a dangerous fire. Flooding extra capital into well-funded sectors like artificial intelligence or driver-less cars could inflate valuation and create a surplus of competition that makes it hard to earn money. It wouldn't be the first time he participated in such a bubble.

Back in the dot-com era, Son invested in around 800 companies in an attempt to create a huge conglomerate. His net worth surged to $76 billion, rivaling Bill Gates before the market crashed and hundreds of his investments went under while his stock fell 99 percent.Among the wreckage, Son was able to recover due to early investments in Yahoo! Incorporated and Alibaba Group Holding Ltd. His initial $20 million investment in Alibaba is now valued at more than $90 billion.

His supporters continue to be encouraged by Son's fearlessness and boldness. Since then, Son has invested in Sprint Corporation and bought chipmaker ARM Holdings for $32 billion last year. His plan is to purchase between 20% and 40% of the companies he invests in, giving him a majority stake in the company and a leadership position on the board to discuss future strategies. Last December, Son promised Trump he'd invest $50 billion to create jobs in the United States.

He is the only key man in the Vision Fund, whereas most large investment funds are jointly held by several people, which gives limited partners the option to withdraw if one of the key men leave. This gives him a huge influence in all of his partnerships and positions him as a powerful world leader with control over the future of technology. Despite talk of stepping down last year, it seems like Son has more work to do.