By Joseph Gibson on August 1, 2016 in Articles › Billionaire News

One possibly unexpected byproduct of Donald Trump's increasingly insane candidacy for President of the United States is the schism it's created among other billionaires – those who continue to support him as part of the team, and those for whom his outlandish behavior and hard-line authoritarian campaign are a bridge too far. Mark Cuban has clearly been in the latter camp for a while, but it took until Saturday night for him to officially endorse Trump's opponent, Hillary Clinton.

The endorsement first came via Twitter, but Cuban was not content to restrain things to Trump's favorite medium of communication. He also introduced Clinton and her running mate Tim Kaine at a campaign event in Pittsburgh, PA, expected to be a heated battleground over the course of this election. Cuban was there to bury Trump rather than praise him, but he did take a page or two from Trump's book during his speech, drawing attention to how his Shark Tank reality show "kicked The Apprentice's ass," and using a term to describe Trump that I'm reasonably certain has never been used during an official presidential campaign stop before: 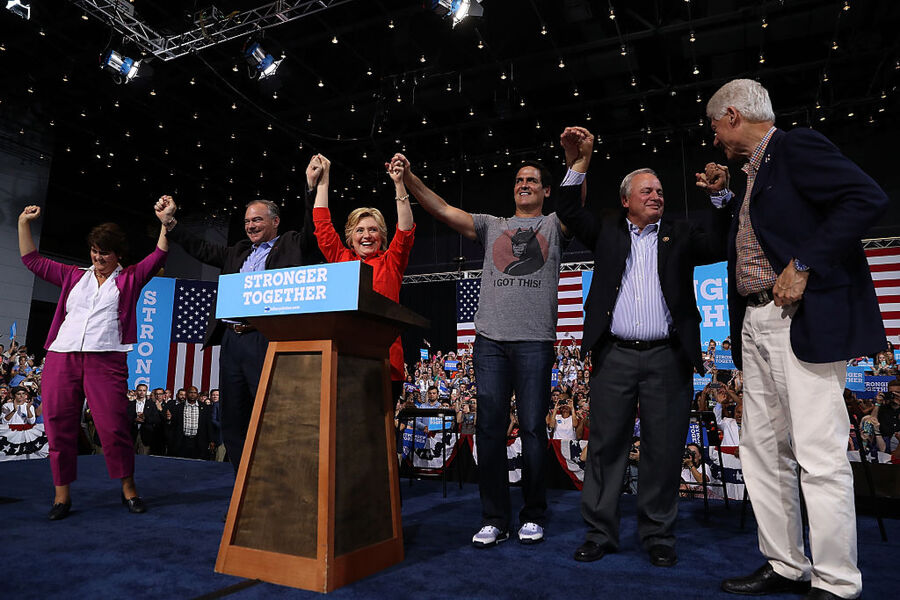 Cuban later went into more detail about his decision to endorse Clinton in an interview with CNN. Unlike many of Clinton's supporters, he began as cautiously optimistic towards the prospect of a Trump presidency, before eventually being turned off by the purported billionaire's antics:

"Donald, initially, I really hoped he would be something different, that as a businessperson, I thought there was an opportunity there. But then he went off the reservation and went bats— crazy."

It would make sense for the Clinton campaign to have someone like Mark Cuban on its side, since his straight-talking billionaire persona is an effective counterpoint to Trump's polarizing twist on same. But we'll have to wait and see if Cuban remains a vocal and visible supporter of the campaign, and if, even more importantly, his endorsement and support have an effect on her standing in the polls.