By Amy Lamare on January 17, 2019 in Articles › Billionaire News

On Wednesday, January 9th, Jeff and MacKenzie Bezos announced that they are divorcing after 25 years of marriage. To recap, Jeff is the richest person in the world with a net worth of $136 billion. Jeff and Mackenzie met in 1992 when they both worked for D.E. Shaw in Manhattan. They were married a year later. In 1994, they moved across the country to Seattle. It was during this road trip that Bezos famously wrote the business plan for what would become Amazon. Jeff and Mackenzie do not have a pre-nup. On January 10th, news of Jeff's new relationship with television host Lauren Sanchez broke. Sanchez is married to Hollywood talent agent Patrick Whitesell. The Bezos family lives in Washington state, where all assets acquired during a marriage are community property and are split 50-50. When Jeff and MacKenzie got married, they didn't have two pennies to rub together. Mackenzie is basically entitled to half of the $136 billion Amazon fortune. When all is said and done with the Bezos divorce, Mackenzie Tuttle Bezos is likely to be the richest woman in the world.

If MacKenzie walks away from the finalized divorce with exactly half of Bezos's fortune, she would have a net worth of $68 billion. That would make her the richest woman in the world by more than $20 billion.

However, it is unlikely that the Bezos's will choose an equal 50/50 split. Most of Jeff's net worth is tied up in Amazon stock. Dividing the shares could dilute Jeff Bezos's control of Amazon. This would be against MacKenzie Bezos's interest as it could devalue the company and also how much the shares are worth – thereby reducing the Bezos family fortune.

As far as real estate holdings go, the couple owns a roughly 29,000 square foot estate outside of Seattle, two neighboring mansions in Beverly Hills, a Texas ranch, the largest home in Washington D.C. and four condos in New York City. 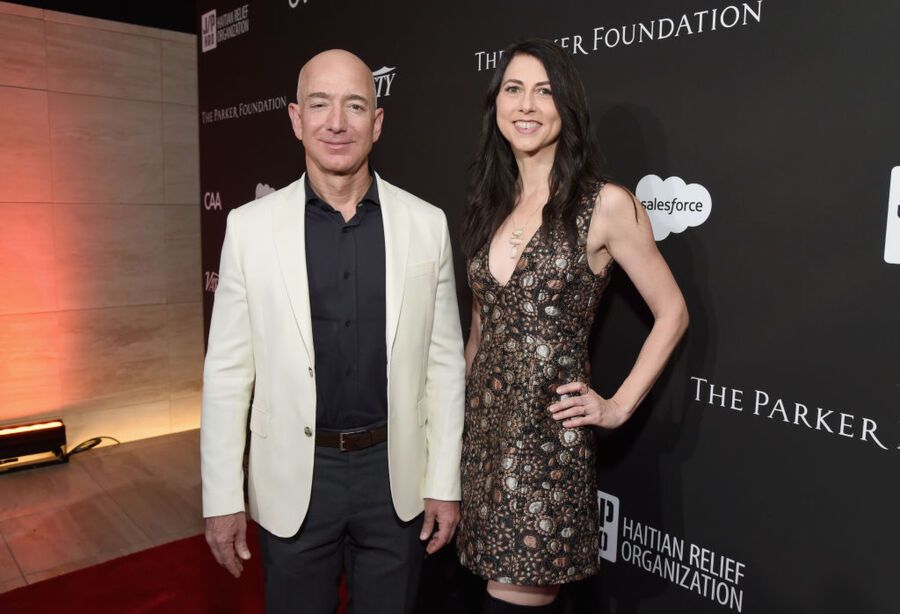 It has been established that Jeff and MacKenzie Bezos do not have a prenup. We do not know if they signed a postnup at some point. Depending on what sort of financial agreement the couple has filed away (if any), she could walk away with significantly less than 50% of Jeff's $136 billion and still be the richest woman in the world. Currently, the richest woman in the world is L'Oréal heiress Francoise Bettencourt-Meyers. She has a net worth of $46 billion.

Let's say MacKenzie walks away with about 33.4% of her husband's fortune. She would still be worth more than $45 billion, perhaps even more than $46 million. Either way, she would be one of the two richest women in the world.

Any way you look at it, dividing the assets and business of two billionaires is in no way simple. There are complex and illiquid assets and issues with the companies they own, not to mention public perception of the couple. Complicating the public perception of this divorce is Jeff's relationship with the not yet divorced Lauren Sanchez. Jeff and MacKenzie have been friends with Sanchez and her estranged husband Patrick Whitesell for at least 10 years.

For Jeff and MacKenzie, the Amazon shares complicates their split even more. How much MacKenzie walks away with will be dependent on how the terms of the divorce are laid out and whether or not it is feasible for MacKenzie to acquire shares of Amazon from Jeff's stash without diluting his control of the company. Basically, it is entirely possible that the world's richest man could end up in the most expensive divorce of all time.

Basically, it is in MacKenzie's best interests to want the family fortune to grow – and that desire is tied to Jeff's control of Amazon. She is probably unlikely to push for a settlement that would require him to sell shares that would lessen his control or lead to a reduction of his 15% stake in the company.

Further complicating the divorce is the fact that Bezos is a billionaire in the public eye. So how the divorce proceeds and how he handles it could affect the valuation of Amazon. If he appears distracted or emotionally charged, shareholders could become concerned about his focus and ability to guide the company. Certainly the news of his relationship with Lauren Sanchez cannot help.

There's one other title MacKenzie will take on when the divorce is final. No matter how the settlement between MacKenzie and Jeff shakes out, she will become the richest author in the world by far. MacKenzie is a novelist who wrote The Testing of Luther Albright in 2005 and Traps in 2013. Currently J.K. Rowling is the wealthiest author with a $1 billion net worth and James Patterson is the second wealthiest with an $800 million net worth. MacKenzie Bezos will easily eclipse the net worths of Rowling and Patterson.