MacKenzie Bezos Has Donated $4.2 Billion To Charity In The Last Four MONTHS

By Brian Warner on December 15, 2020 in Articles › Billionaire News

By our count, MacKenzie Bezos is currently the 18th richest person in the world with a net worth of $61 billion. Thanks to the soaring stock price of Amazon, which was founded by her ex-husband Jeff Bezos (currently the richest person on the planet), MacKenzie's net worth has increased by $23 billion in the last 12 months. In the same time, Jeff's net worth has increased by $70 billion, from $115 billion to $185 billion. In 2020 MacKenzie has at times been the richest woman on the planet. Today that honor belongs to Francoise Bettencourt Meyers, heiress to French cosmetics conglomerate, L'Oreal. Unfortunately I don't think we'll see MacKenzie's rankings increase any time soon. Not because we predict Amazon's stock price is about to tank, because MacKenzie is apparently determined to give her entire fortune away as soon as possible.

MacKenzie has given away $4.2 billion in the last FOUR MONTHS alone. If you go back a little further, it's $6 billion in 2020.

As a quick refresher, Jeff and MacKenzie married the year before Amazon.com was founded. They were together from 1993 to 2019, finalizing their divorce just four months after confirming their separation.

The end result was MacKenzie was given 20 million shares of Amazon, roughly 1/4 of their former combined holdings. At the time of the settlement, those shares were worth $35 billion. As we mentioned moments ago, today those shares are worth around $61 billion.

Upon receiving the settlement, MacKenzie pledged to… and I quote…:

"…give the majority of my wealth back to society that helped generate it, to do it thoughtfully, to get started soon, and to keep at it until the safe is empty."

MacKenzie is proving true to her word… 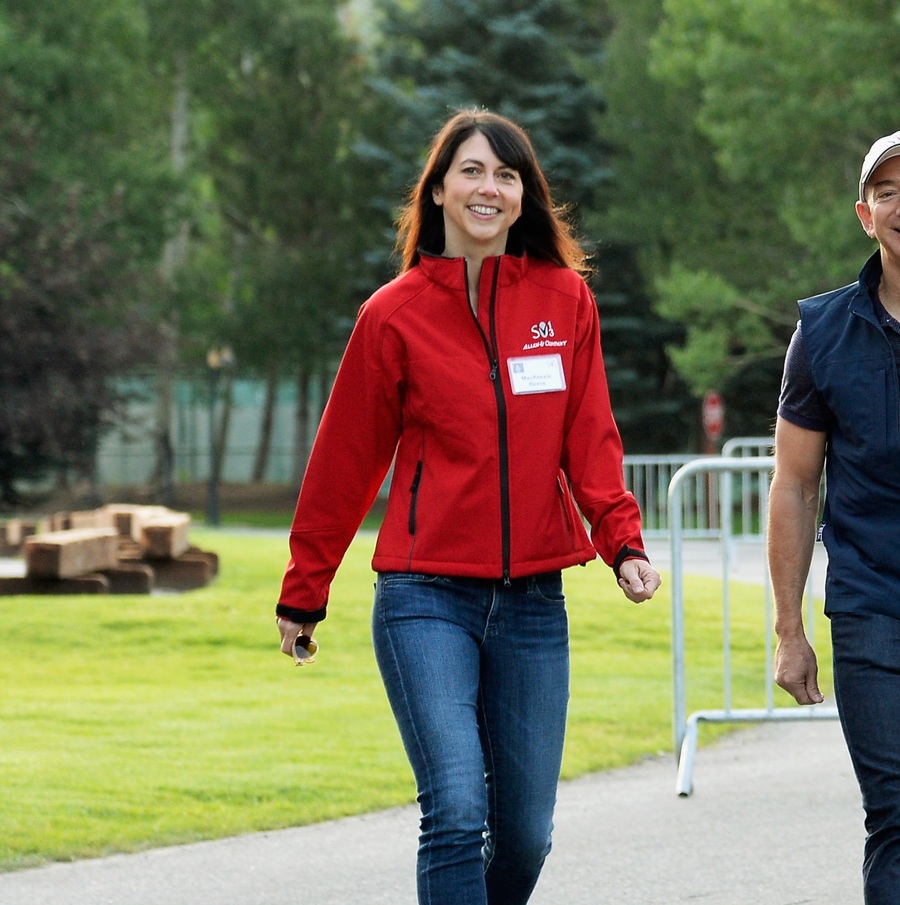 A lot of billionaires make similarly grand statements about their plans to eventually donate large chunks of their fortune. Keyword "eventually". As in, they sign The Giving Pledge and promise to give at least half their fortune way by the end of their life. Or the donation happens after they die, which for an entrepreneur in his or her 40s/50s could very well be decades later.

MacKenzie Bezos, or MacKenzie "Scott" as she is being called now (Scott is not her maiden name, it's her birth middle-name. Her birth last name is "Tuttle". I believe "Scott" was the first name of one of her grandfathers…") is clearly determined to buck the trend of donating her fortune "eventually".

On July 28, MacKenzie posted a Medium piece in which she revealed $1.675 billion in donations to dozens of charitable organizations focused on historically marginalized groups. Her donations specifically fell into 9 key areas of need including racial equity, gender equity, climate change and public health.

Earlier today MacKenzie posted a new Medium piece in which she revealed that in the last four months alone she has donated $4.2 BILLION to charity. That does not include the previously mentioned $1.67 billion. Put together she has donated $6 billion since late July.

Today's $4.2 billion has been donated to 384 organizations located in all 50 states, Washington D.C. and Puerto Rico. The organizations include food banks, YMCAs, support services for the most vulnerable, debt relief, employment training, historically black colleges and more. She explained that her financial team initially identified around 7,000 organizations, then focused the list down to 384. On how they whittled the list down, MacKenzie explained:

"After my post in July, I asked a team of advisors to help me accelerate my 2020 giving through immediate support to people suffering the economic effects of the crisis. They took a data-driven approach to identifying organizations with strong leadership teams and results, with special attention to those operating in communities facing high projected food insecurity, high measures of racial inequity, high local poverty rates, and low access to philanthropic capital…

To select these 384, the team sought suggestions and perspective from hundreds of field experts, funders, and non-profit leaders and volunteers with decades of experience. We leveraged this collective knowledge base in a collaboration that included hundreds of emails and phone interviews, and thousands of pages of data analysis on community needs, program outcomes, and each non-profit's capacity to absorb and make effective use of funding. "

People are free to do what they wish with their fortunes, but I do wish Jeff and other billionaires who made enormous fortunes in 2020 would follow in MacKenzie's footsteps. Could Jeff Bezos and Elon Musk fully fund every food bank in the US right now and through the end of time? YES. Seems like a decent and achievable goal.