MacKenzie Bezos Could Become The Richest Woman In The World Tomorrow

By Brian Warner on July 9, 2020 in Articles › Billionaire News

Over the last six months, Jeff and MacKenzie Bezos have seen their respective net worths absolutely explode. While the rest of the world suffers through mass unemployment, furloughs, pay cuts and worse, Amazon's soaring stock price has padded the former husband and wife's fortunes with tens of billions in new value. MacKenzie Bezos' net worth at the very beginning of 2020 was $37 billion. Back then she wasn't in the top 30 of the overall richest people in the world and she was the fifth-richest woman in the world. If my hunch is correct, sometime tomorrow (Friday July 10), MacKenzie will not only enter the ranks of the top 10 richest people alive, she could also end the day as the richest woman in the world, for the first time.

Here's a little background for those who have not been paying attention:

Jeff and MacKenzie Bezos were married from 1993 to 2019. They have four children together. In January 2019, Jeff announced they had officially separated through a Twitter post. Amazingly, just four months later, on April 4, 2019, they announced that a final divorce settlement had been reached. The terms of the settlement called for Jeff to transfer a little under 20 million Amazon shares over to MacKenzie with the caveat that he would control those shares' voting rights. Jeff was left with around 58 million shares, roughly 12% of the total shares outstanding.

As we stated previously, MacKenzie Bezos' net worth on January 1 was $37 billion. Below is a chart of how Amazon's stock has performed in the last 12 months. Note the line in the middle showing a share price of $1,898.01 on January 2, 2020, the first day of trading this year: 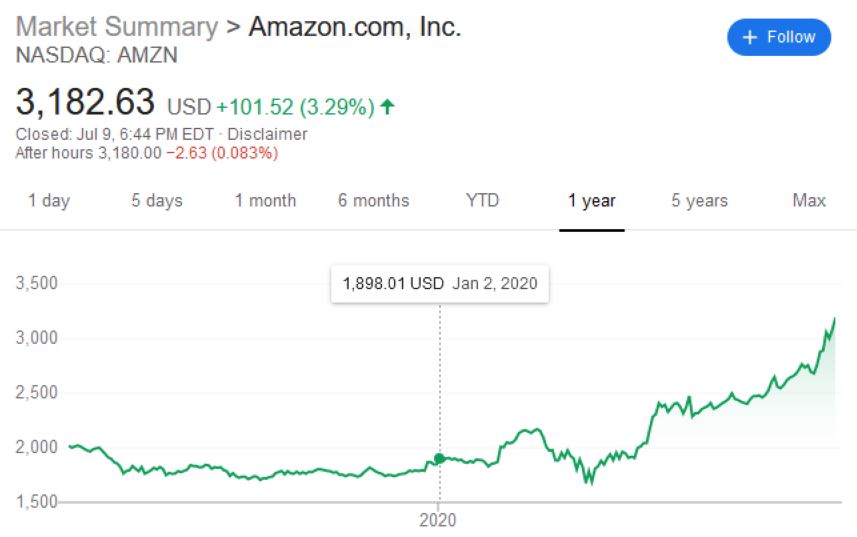 At the time she received her settlement shares in April 2019, the stake was worth around $35 billion. Note that the stock was relatively flat throughout that entire 2019 period leading up to the new year. And then the stock went on an absolute tear.

While most companies have suffered enormously during COVID, Amazon is killing it every day. People are stuck at home ordering boxes, watching prime, starting new websites on AWS, installing Ring, babbling desperately to Alexa…

You can see the stock dip slightly after the COVID panic hits the globe. Then it recovers. Then it took off like a wild stallion.

After today's market closed, MacKenzie Bezos was worth $63 billion. 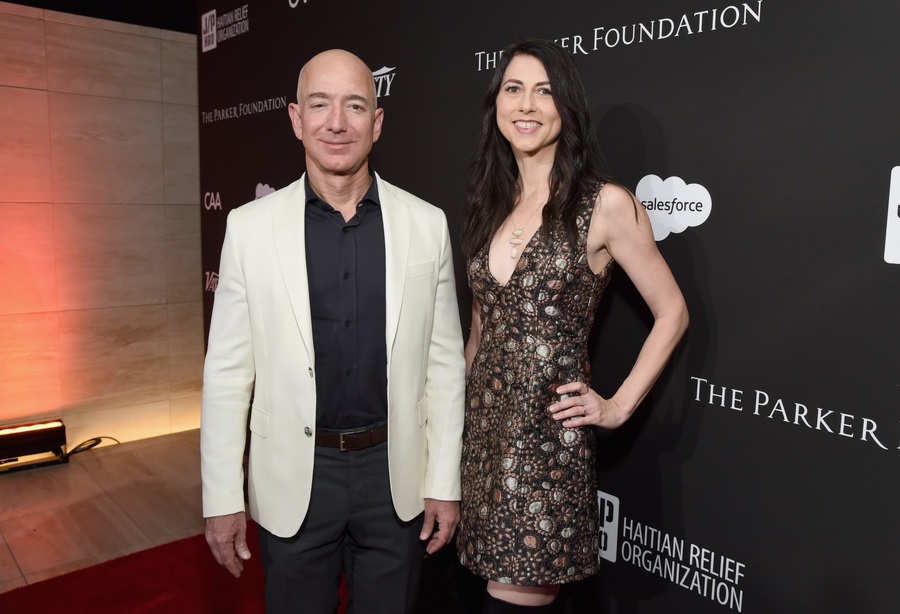 When MacKenzie started the year, here's how the five richest women in the world stacked up:

After today's market close, here's how that very same list stacks up:

The Richest Woman In the World – What Would It Take?

Having watched the recent ups and downs of their respective net worths, I predict MacKenzie will overtake Francoise when her net worth hits $65.1 billion. Francoise' net worth is much more stable than MacKenzie's, it has fluctuated between $64 and $65 billion in recent weeks.

In order for MacKenzie to have a net worth of $65.1 billion, I calculate that Amazon's share price would need to hit $3,255. That would be a 2.3% increase over today's closing price. As we stated earlier in this article, Amazon's stock increased 3.3% today alone. It's up more than 9% since last week so I don't think a 2.3% increase tomorrow is an extraordinary prediction. Again this is just an opinion based on nothing other than gut feeling. I should also disclose that I own some Amazon stock, held in a retirement account. I am not a stock market expert and I am not qualified to give any kind of stock investment advice. Frankly, I'm generally a bad stock picker.

And btw, I could be totally wrong. Amazon could drop 5% tomorrow and this entire article would have been worthless. But I enjoyed writing it either way, and it will be fun to see how tomorrow turns out!

Do you think we'll have a new wealth Queen in the world???

On the afternoon of Friday July 10, Amazon ended the trading day up $17 per share, which is a gain of 0.55% on the previous day. At its highest point today AMZN hit $3,215. Either way, below the $3,255 needed for her to top Francoise Bettencourt-Meyers.

Annnnnd she did it! MacKenzie took the crown on Monday July 13, 2020. Amazon stock broke the magic number of $3,2555 a few minutes after the markets opened, going as high as $3,300 briefly. As I'm typing this the markets have only been open for an hour so we have an entire day of ups and downs remaining. But as I'm typing this right now Amazon is at $3,290 per share which is easily enough to make MacKenzie just slightly richer than previous wealth Queen Francoise Bettencourt-Meyers.