Larry Ellison Leaves California And Its High Taxes Behind, Moves To His Hawaiian Island

By Amy Lamare on December 28, 2020 in Articles › Billionaire News

Larry Ellison bought 98% of the Hawaiian island of Lanai in 2010. Now, he's leaving his posh California estate behind and moving to Hawaii. He is making his primary residence on Lanai now, making him the latest tech executive to leave the golden state. He notified his employees of his move last week. His announcement followed the recent news that Oracle is moving its headquarters to Austin, Texas. The company has been headquartered in Silicon Valley since its founding in 1977. Many assumed that Ellison would be moving to Texas with Oracle. In a memo to Oracle employees, he said: "I've moved to the state of Hawaii and I'll be using the power of Zoom to work from the island of Lanai. Mahalo, Larry."

Lanai is the smallest inhabited island in Hawaii. It was once known as "The Pineapple Island" due to its origins as a pineapple plantation. In 1922,  James Drummond Dole was a young Harvard graduate living in Oahu running his fledgling pineapple business. That year, Dole paid $1.1 million for the land and just like that, an entire island was taken over by Dole pineapple. Dole plowed the island's interior into fields, built roads, a harbor, and laid out a quaint town in the center of the island with Dole Park in the middle. The park was surrounded by plantation-style cottages to house the workers in his pineapple fields. By 1930, nearly all of the island's 3,000 residents were Dole employees. The island exported 65,000 tons of pineapples each year. Dole had gardeners care for his employees' lawns and built a golf course. Dole's motto was "Have happy workers, grow better pineapples."

Ellison is furthering Dole's motto. At the beginning of the pandemic, when many of Lanai's businesses were closed, he committed to paying the full salaries and benefits of Lanai's residents who work at his hotels and businesses. He is the main employer of the 3,200 residents of Lanai. He owns a third of the houses on the island as well as the main grocery store and the monthly newspaper. The island has one school and no stoplights. It is a small, secluded island of just 140 square miles. Ellison also owns the water company, the cemetery, and is negotiating to buy Lanai's electric grid. He also owns Dole Park – the central common square at the heart of the city, and all the buildings around it. He also owns the community center, the town swimming pool, the theatre, the grocery store, two golf courses, the water company, a wastewater treatment plant, and the island's cemetery. He owns 87,000 acres of Lanai's total 90,000 acres. 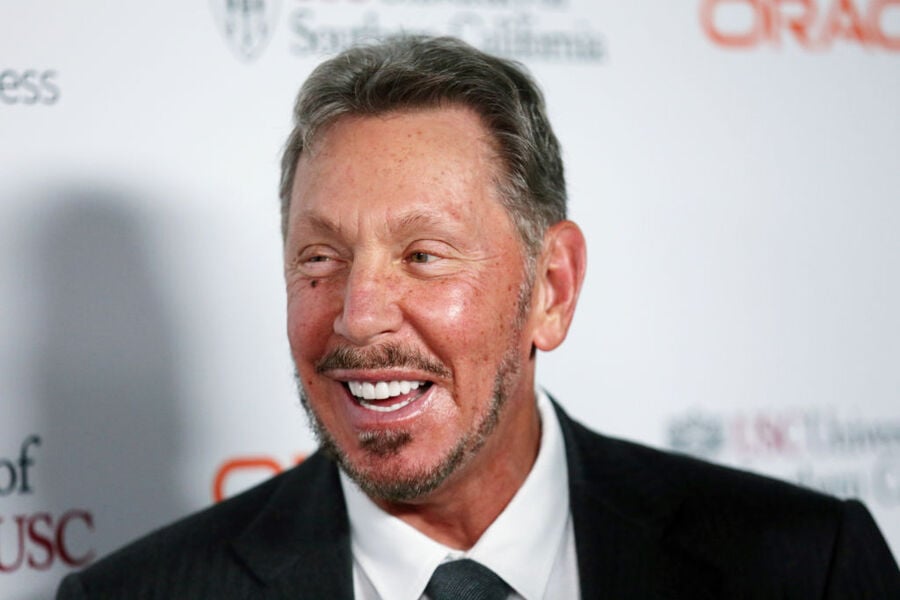 Ellison owns the Hotel Lanai, the Four Seasons Resort Lanai, and the Four Seasons Hotel Lanai at Koele, a Sensei Retreat, which are the only three hotels on the island. Of all the properties and businesses on the island, only a handful are not owned by and don't pay rent to Ellison. This includes the gas station, two banks, a credit union, a rental car company, and a café.

Lanai's growth has been limited over the years by a lack of enough water for a larger population. Ellison is building a state-of-the-art desalination plant to produce more freshwater. Ellison hopes to see the island's population grow to 6,000. There has been some talk of flower farms and organic wineries. There are plans for a sustainable fishery using aquaponics and hydroponic to raise not just fish, but also grow fruit and vegetables.

Ellison is bringing better healthcare to the island. There's a bowling alley, a 22-acre film studio, and a residential tennis academy for competitive kids. Ellison is renewing and refreshing every part of not just the island, but life on the island.

Also as a result of his plans, after several years of crippling unemployment, the citizens of Lanai were back at work. Just four months after Ellison's purchase of Lanai, unemployment was down to 1.2 percent.

Ellison, 76, has a net worth of $79 billion and is the latest tech executive to leave California and its high taxes behind. Elon Musk moved to Texas. Doug Merritt, the CEO of Splunk, also moved to Texas.