By Amy Lamare on March 8, 2016 in Articles › Billionaire News

Many families have skeletons in their closets. However, it isn't often that those skeletons reveal ties to the Nazis, Hitler, and decades of covert funding of far right wing political movements. Welcome to the history of the Koch family. Yes, those Kochs – the billionaire brothers who are big movers and shakers in the far right wing Tea Party movement.

A new report has surfaced that details the family ties to Adolf Hitler. In the years preceding World War II, a young and industrious Fred Koch headed to Europe to seek his fortune. While there, he entered into a partnership with William Rhodes Davis, best known as an American Nazi sympathizer. Mayer hired Koch to build the Third Reich's third largest oil refinery. This refinery was a critical part of Hitler's war machine.

The Koch family's past ties to Hitler and the Nazi party are not mentioned in any official histories or biographies of the family.

Fred Koch, father to Charles and David, got his start in business with a $500,000 paycheck from Stalin for Koch's assistance in building 15 oil refineries in the Soviet Union in the 1940s. Just a few years later, Koch helped the Nazis build that huge oil refinery. That refinery went on to produce hundreds of thousands of gallons for the Luftwaffe. It was destroyed by Allied airstrikes in 1944.

In 1938, the Koch family patriarch stated that the only sound countries in the world were Germany, Italy, and Japan. In fact, to make sure his kids were brought up what he felt were the right notions about the world, he hired a German nanny who was such a devoted Nazi that she returned to Germany in 1940 to help with the cause. After the Nazi nanny's resignation Fred became the disciplinarian. He frequently whipped his children with belts. This story is just one of the many stories in the book Dark Money by Jane Mayer. The book details the rise of the radical right and the billionaire families that funded that rise. The Kochs, in particular, have spent hundreds of millions of dollars to bring their fringe political ideas to the center of American politics. 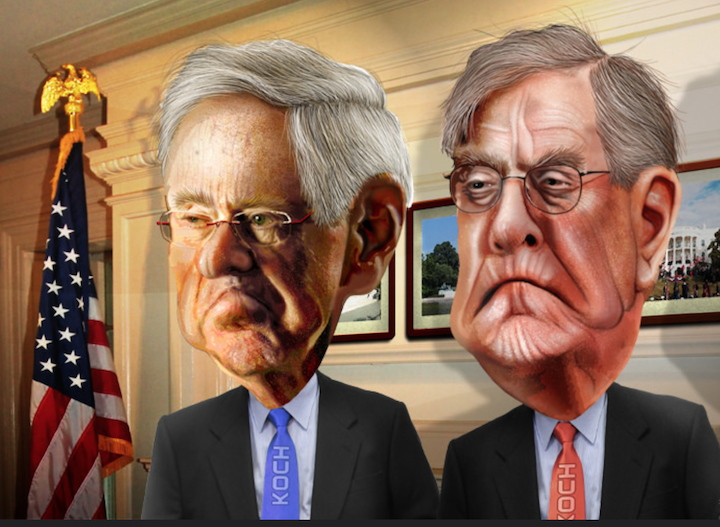 Fred Koch's dealings with Hitler and the Nazi party didn't dull his fervor for extremism. Twenty years after his collaboration with the Nazis, Fred Koch was as extreme as ever. He was one of the 11 founders of the John Birch Society in 1958. The society accused a number of high profile Americans of communist leanings. Koch and the John Birch Society accused President Dwight Eisenhower of being a communist.

A few years later, in 1960, Koch made it clear that he felt "the colored man looms large in the Communist plan to take over America." Charming, right? Koch also supported the movement to impeach chief justice Earl Warren after the Supreme Court voted to desegregate public schools in the historic Brown vs. Board of Education case.

Fred Koch would be proud of how his sons turned. Charles and David have followed in their father's right-wing, racist, extremist footsteps. After Fred died, Charles and David Koch became the primary bankroll for movements designed to destroy the government. The Kochs and their allies have given hundreds of millions to organizations that fight to legitimize the right to pollute for oil, gas, and coal companies.

The Tea Party movement is, in large part, funded by the Kochs. In the 2016 elections the Kochs plan to spend $889 million advancing the agenda of the radical right. That is twice what they spent in the 2012 election. It remains to be seen if Hillary Clinton or Bernie Sanders will be able to withstand the onslaught from the strength of the Koch's political machine.