Did King Solomon Really Have The Largest Fortune Of All Time? New Report Says It's A $3 Trillion Lie

By Amy Lamare on August 3, 2017 in Articles › Billionaire News

The legend of King Solomon is pretty outlandish. If you believe it, then you believe that the biblical ruler put together a personal net worth comprised of gold worth $3 trillion. It's all right there, in the Old Testament. King Solomon reportedly gathered 500 tons of pure gold. That gold was taken from mines that some true devotees of this legend believe still exist.

We've taken some flack here at Celebrity Net Worth for posting a list of the richest people in history (inflation adjusted, of course) and not including King Solomon. It is our opinion that Solomon's existence and fortune can't be proven to a scientific certainty. It is just not 100% factual that there was ever an actual King Solomon or that he had any wealth, at all. If he did exist, there's definitely not any solid evidence that his fortune was actually large enough to make him the wealthiest human being of all time. 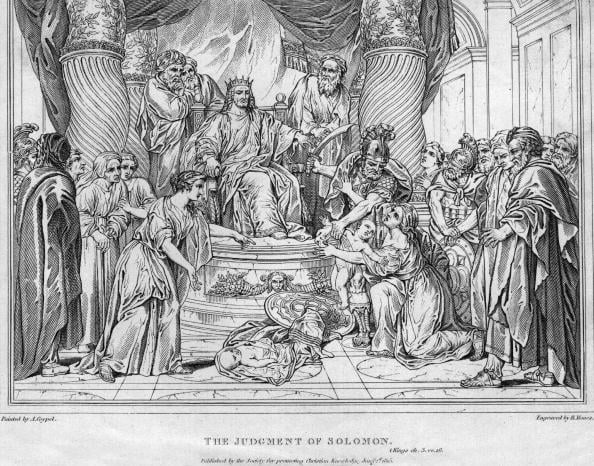 Now, it seems, at least one historian agrees with us. British historian and author Ralph Ellis believes that the legend of King Solomon is a complete myth. Ellis posits that the infamous ruler was not King of Israel, but rather an Egyptian pharaoh whose story has been wildly misinterpreted over the centuries. Ellis even goes so far as to say that those legendary mines that were the source of Solomon's fortune never existed at all. Imagine that!

Ellis believes that the legend of King Solomon grew from the story of a pharaoh called Shoshenq I, who was the ruler of Egypt and Israel in the 10th century BC. Ellis delightfully said that the possibility of finding Solomon's lost mines is:

"…about as likely as taking a dip in the Fountain of Youth."

Ellis researched the story of Solomon for 20 years. Solomon's story unfolds in the books of Kings and Chronicles in the Old Testament.

Ellis started studying the legend of King Solomon in 1997. He found that the stories of amazing riches buried somewhere in Israel are most likely a "gross misinterpretation" of historical texts. He will admit that there is probably a grain of truth to the story of Solomon's wealth, but not quite to the capacity of it being $3 trillion.

Ellis' research has led him to conclude that Solomon was not a wealthy King of Israel. He was a powerful and very feared Egyptian Pharaoh. The wealth of the pharaoh was accumulated by neighboring rulers robbing royal tombs in Egypt's Valley of the Kings, so that they could give the riches to Solomon in exchange for him not invading their territories.

For many generations archaeologists and theologians have crisscrossed Israel in search of Solomon's mines, capital city, palace, temple, and wealth. No one has ever found even so much as a hint of them. At some point, facts have to be faced. The legend of King Solomon and his wealth is just that – a legend. Or, and this is a slim possibility, all of those archaeologists and theologians have all just been looking for the all the wrong things in all the wrong places.

Ellis believes that the stories of pharaohs were not acceptable to later biblical authors, so they altered history to make the pharaoh an Israelite hero. This explanation, if true, would solve all the inconsistencies in the Bible in regard to King Solomon. Additionally, the treasures that would have been "Solomon's" are likely in Cairo's Egyptian Museum, not buried in the desert somewhere.

Circling back to the earlier controversy with our list of the wealthiest humans of all time, we will stand by our assertion that there isn't enough proof to include him on this list. However, British Bible scholar Kenneth Kitchen believes that Solomon did exist and did receive large quantities of gold as tribute. Thanks to these gold tributes, Kitchen calculates that Solomon might have accumulated an inflation-adjusted fortune of $20 billion. A very impressive fortune no doubt, but clearly not enough to make him the richest human being of all time.

The Richest Human Beings Of All Time

#6 Jakob Fugger of the Lily