By Amy Lamare on January 10, 2020 in Articles › Billionaire News

Daniel Lubetzky is the 51-year-old founder of Kind Healthy Snacks. He never had any intention of getting into the food business. But then again, Kind Bars aren't really about food, they're about health and altruism. Social consciousness is at the core of Kind's business strategy. The company has sold two billion snack bars since its founding in 2004. The company has $800 million in sales and is worth about $2.9 billion. Lubetzky is the majority owner of Kind Healthy Snacks, which gives him a net worth of $1.5 billion. The company spearheads "the Kind Movement,"  which seeks to make the world a little kinder. The company encourages its employees and customers to "do the kind thing," and take part in random acts of kindness. By the company's count, it has facilitated 11 million acts of kindness since 2004.

There are 24 varieties of Kind bars made with nuts, dried fruit, chocolate or honey. They are sold in Whole Foods, convenience stores, REI, Target, and Starbucks. They are on Delta flights. Kind is one of the top five bestselling snack bars on the market alongside Clif Bars, Nature Valley granola bars, Quaker Chewy Granola Bars, and Nutri-Grain Bars. That market saturation brought Mars Inc to Kind's front doors. The M&M's maker bought a 40% stake in the company for an undisclosed sum in 2017. 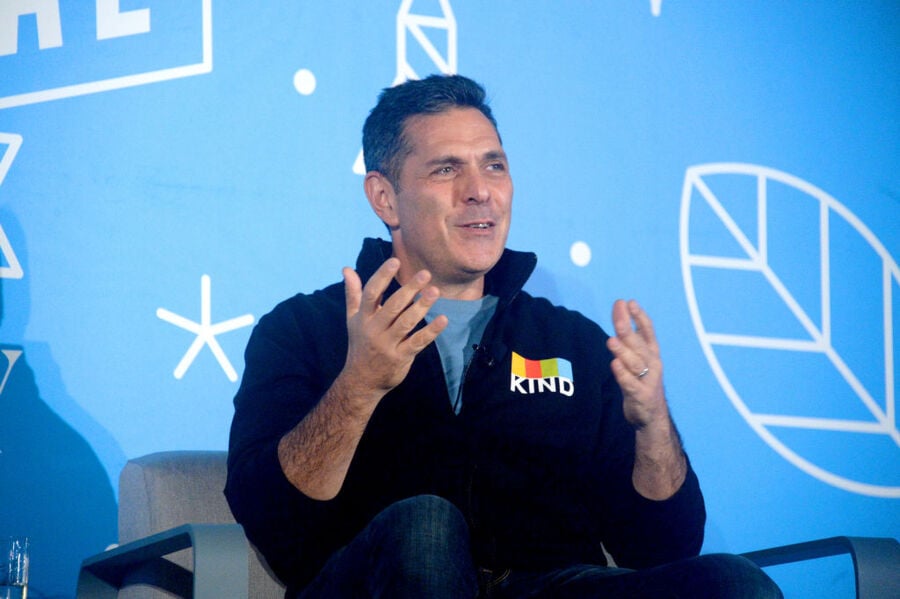 Lubetzky was born in Mexico City in 1968. His father was a Holocaust survivor and Mexican Jew. By the time Daniel was nine years old, his dad was telling him about the three years he spent in the Dachau concentration camp. His mom objected to that because he was only nine. His father commented that  he was nine when he was in the concentration camp. Lubetzky's family moved to San Antonio, Texas in 1984 for his father's job managing duty-free stores near the U.S.-Mexico border. Lubetzky met a watch manufacturer in high school, bought wholesale watches, and then sold them at a markup at flea markets. He attended Trinity University in San Antonio and by that time was renting kiosks in malls for his watch company.

In college, Lubetzky majored in economics and international relations. He became convinced that business could be used for social good. When he graduated in 1990 he went to Stanford law school. He planned to work in diplomacy and try to bring peace to the Middle East. After law school, he moved to Israel to develop a cross-cultural business. That business failed but led to his next move. He found a sun-dried-tomato spread made by a local company that had recently gone out of business.  The owner was buying sun-dried tomatoes and olive oil from Italy and glass jars from Portugal and importing it all to Israel. He reached out to the owner and told him if he found the items closer to home, it would lower his cost.

In 1994, 25-year-old Lubetzky invested $10,000 in savings to start PeaceWorks, a marketing, consulting, and distribution company. He consulted for people like the sun-dried tomato spread maker, helping clients find more cost-efficient supply chains that also fostered collaboration between conflicting groups (like Israelis and Arabs). PeaceWorks branded the food items, highlighted the social mission and sold them in the U.S. By the late 1990s, PeaceWorks' hit $1 million in revenue. It was during this time that he was inspired to start Kind.

He was traveling across the globe and couldn't find anything that was wholesome, convenient, tasty, and healthy. He wanted to make something he would eat. In the late 1990s he came across a bar with nuts and fruit in Australia and set out to replicate it in the U.S. He took $100,000 of PeaceWorks' profits and started Kind in 2004. At first, he focused on small, high-end stores where he already had relationships from his time with PeaceWorks. He went to Whole Foods in Los Angeles and Denver and helped managers stock shelves, invited himself on their lunch breaks, and insisting that they try samples of his snack bar until they placed an order.

In 2007 Kind was on the shelves of Walmart. But by 2008 it wasn't. Walmart had placed an order for Kind Bars for 1,000 stores. Shipments went missing because Kind didn't yet have a good tracking monitoring system. Walmart dropped Kind in 2008 just as the financial crisis hit and when his wife was pregnant with their first child. In December 2008, three days after his son was born, Lubetzky sold a third of the company to Vitaminwater and private equity firm VMG Partners for $15 million. That was exactly the boost the company needed.

Then, in March 2015, the FDA issued a warning letter to Kind saying it mislabeled its products and misled consumers and could not call its products healthy. The FDA based this on the fat content of the bars. Nuts used in Kind bars are high in fat. FDA rules says a product can only be labeled healthy if it had no more than one gram of saturated fat per 40 grams of weight and no more than 15% of its calories derived from fat. Kind immediately stripped "healthy" from its bars' packaging and its website. Under FDA rules, avocado is considered unhealthy due to its fat content.

In April 2015, Lubetzky and his team went to FDA headquarters outside of Washington D.C. They filed a Citizen Petition asking the FDA to change its definition of healthy. Just over a year later, in May 2016, the FDA said Kind could use the term "healthy" to describe its products again.

What would Lubetzky do if he sold Kind? He'd fall back on his humanitarian passion. "Now I just want to incubate great ideas, great people and have maximum impact on the world," he said.