JP Morgan Spent $1.5 Billion On Art During His Life – And It Now Sits In This Library

By Amy Lamare on November 9, 2019 in Articles › Billionaire News

Today, JP Morgan is a brand and a venerable financial institution that is the largest bank in the U.S. However, there was a man that started it all: John Pierpont Morgan, Sr. was a financier and banker who absolutely dominated corporate finance on Wall Street during the Gilded Age. During his career, J.P. Morgan led the formation of a number of massive corporations including U.S. Steel, International Harvester, and General Electric. He had controlling interests in a slew of other American companies including AT&T, Western Union, and 24 railroads. He was so influential that during the Panic of 1907, he put together a coalition of bankers that saved the American economy from collapse. He was also an art connoisseur and collector who spent $1.5 billion on art during his life. But we'll get to that in a moment.

J.P. Morgan was born in 1837 in Hartford, Connecticut into a wealthy and prominent family. He was the son of Junius Spencer Morgan and Juliet Pierpont. He went to school at the exclusive English High School of Boston and at the Swiss boarding school Bellerive. He attended the University of Gottingen in Germany at the wishes of his father, so that he could become fluent in German. He achieved that and a degree in art history by the time he was 20. 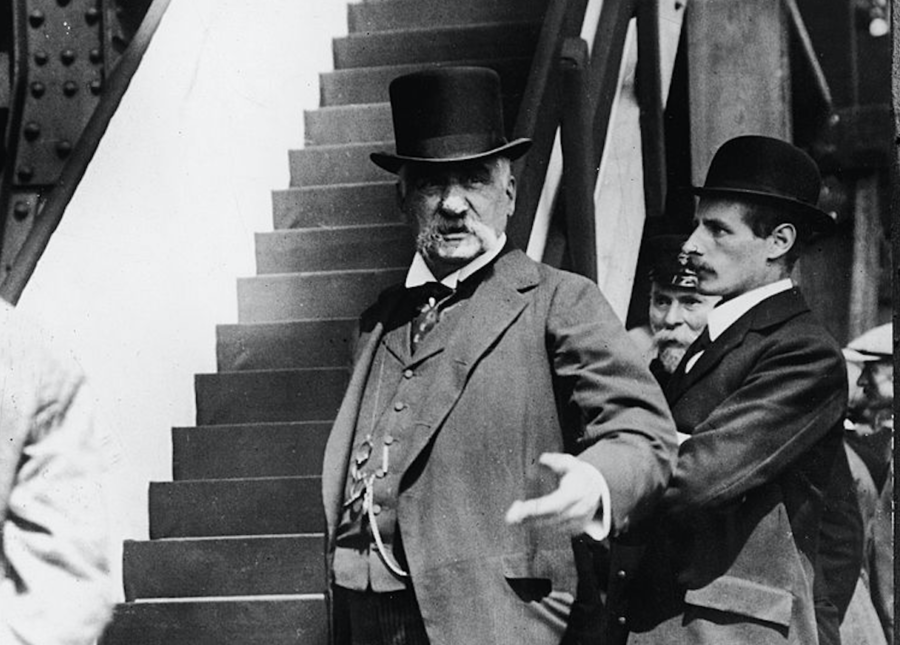 Morgan got his start in banking at the London branch of Peabody, Morgan & Co. in 1857; a merchant banking partnership between his father and George Peabody that was founded three years earlier. In 1858, he moved to New York City to take a job at the banking firm Duncan, Sherman & Company, which was the American branch of George Peabody and Company. From 1860 to 1864, he was the New York agent for his father's firm working at J. Pierpont Morgan & Co. From 1864 to 1872 he worked for Dabney, Morgan, and Company. In 1871 he partnered with the Drexel family to form Drexel, Morgan & Company. In 1895, after the death of  Anthony Drexel, Morgan renamed the company J.P. Morgan & Company. Morgan was an influential businessman whose ascent to power and wealth was because of the railroads. Back in the Gilded Age, trains were the way to travel and ship goods. Railroads were the largest businesses in the U.S. back then.

With the money made in banking and railroads, Morgan became an art collector who spent $1.5 billion on art in his lifetime. He was a collector of paintings, pictures, books, clocks, and other art objects. Where is that art? The Morgan Library and Museum in the Murray Hill neighborhood of New York City, not far from the Empire State Building. The museum complex is half a city block long and used to be the private residences owned by J.P. Morgan. Morgan's own residence – his study, main library, and librarian's office are in the museum's central building. The rest of his home is where the galleries are. The café and gift shop are inside a brownstone that belonged to his son.

Over the last two decades of his life, Morgan was dedicated to finding rare and expensive things to add to his art collection. The museum is impressive. A grand rotunda is outside the entrance to J.P. Morgan's private rooms. The artwork on the ceiling was inspired by the work of Raphael. The paintings show the three literary epochs that are in Morgan's collection – the ancient world, the Middle Ages, and the Renaissance.

The most important piece of art in this room is a plaster cast of George Washington's face, made by the French sculptor Jean-Antoine Houdon. Washington lived in a time before modern photography, so this plaster cast is actually the best representation of what Washington actually looked like. It was made in 1785, four years before he became president. It is believed that Morgan purchased this artifact on a trip to Rome. The librarian's office, also located off the rotunda, contains one of the best collections of Mesopotamian seals. The office belonged to Belle da Costa Greene. Her dad was the first black graduate of Harvard. She was instrumental in the purchases and sales of millions of dollars of art on Morgan's behalf. When he died, she was made the director of his library.

The main library is filled with one-of-a-kind artifacts. The walls have three levels of shelves that contain rare books. In the center of the library is a tapestry depicting one of the seven deadly sins: avarice. This tongue in cheek nod to Morgan's perceived greed was meant to encourage him to be more generous. The library also contains three Gutenberg bibles, which is the most of any single collection. They are some of the earliest printed texts in the world. One of Morgan's was printed in 1455. The library also contains the Lindau Gospels which has the four gospels of Matthew, Mark, Luke and John. He purchased it in 1901 for what would be $387,000 in today's dollars.

Oh, by the way, it was J.P. Morgan who coined the phrase "if you have to ask how much it costs, you can't afford it."

Morgan's favorite works of art are located in his personal study.

In 1998, the staff of the museum realized that the collection was too big for the space. They hired the architect Renzo Piano to build new galleries, add a performance hall, and renovate the entrance of the museum. The project took eight years to complete and was opened to the public in 2006. The addition and re-design added 75,000 square feet to the museum.

When the museum was finished in 1906, Morgan started to withdraw from the finance world. He died seven years later, in 1912 in his sleep, while traveling abroad. His son, J.P. Morgan Jr. made the library a public institution in 1924 as a tribute and memorial to his father.