How Did Jeffrey Lurie Earn The Money To Buy The Super Bowl-Bound Philadelphia Eagles?

By Amy Lamare on February 4, 2018 in Articles › Billionaire News

No fan base is more excited right now than that of the Philadelphia Eagles The franchise has never won a Super Bowl. They have one NFL championship in 1960 that pre-dates the Super Bowl. The Eagles were NFC Champs in 1980 and 2004, but came home on the losing end of the Super Bowl. Their fans are prepping for cheesesteak laden parties this coming Sunday—and I'll be honest, I could go for a good Pat's pizza steak right now. Their owner, Jeffrey Lurie, has been trying to get his franchise the sport's biggest prize for YEARS. But, how did Lurie make the money that allowed him to buy an NFL franchise.

Buying an NFL team is a crazy expensive endeavor. For the money it takes to buy, own, and run an NFL franchise, you could own several mega yachts, a fleet of private jets and a private island in the Bahamas. But some people just want to own a professional sports team. That was the case with Jeffrey Lurie, but the Eagles were not his first choice. Lurie grew up in Boston and was a Patriots fan. When the Patriots were for sale in 1993, he tried to buy the team. However, once bidding reached $150 million, his uncle shut that down. Lurie also tried to buy the Rams and toyed with the idea of being a part of the team to bid for the Baltimore expansion team. Lurie was determined to buy an NFL franchise and that finally happened in May 1994 when he bought the Philadelphia Eagles for $195 million. 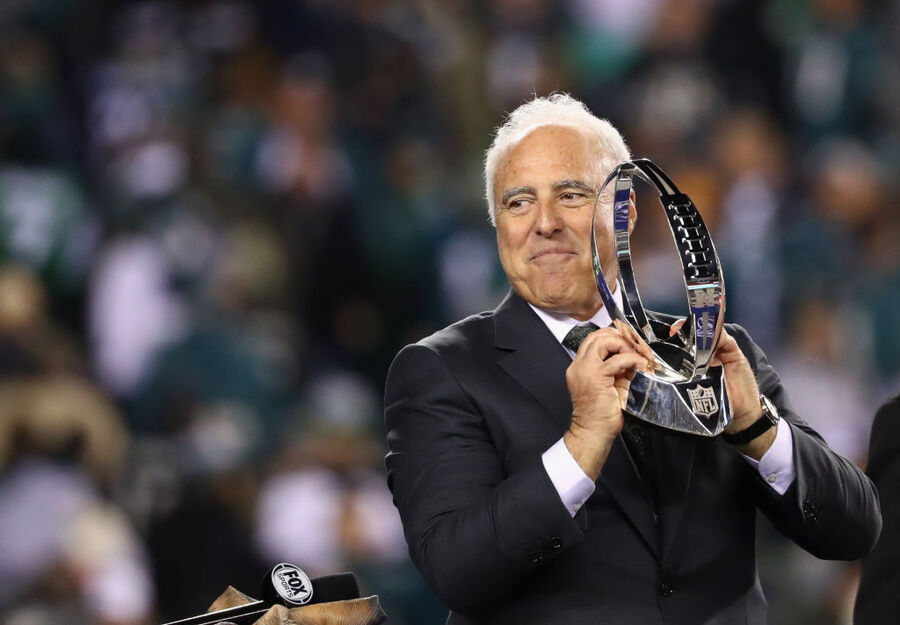 Lurie is an interesting case among NFL owners. He actually went out and borrowed $190 million from a bank to buy the Eagles. Now, you or I could not just walk into our local Wells Fargo and walk out with $190 million and neither did Lurie. He had a little help from the family business. Lurie and his mother used stock in General Cinemas to secure the loan. Lurie's grandfather, Phillip Smith, founded the chain of movie theatres in 1935. The family fortune grew by leaps and bounds as the company expanded over the decades. General Cinemas evolved into Harcourt General, Inc., a nearly $4 billion company that in its heyday ran the fourth largest movie theatre chain, had the rights to the bottling of Pepsi products, owned publishing houses, insurance companies, and department stores including Neiman Marcus and Bergdorf Goodman.

Lurie was born in 1951 in Boston. He was one of three children of Nancy Smith and Morris Lurie.  Jeffrey Lurie was an academic. He got his B.A. from Clark University, his M.A. from Boston University, and his PhD from Brandeis University. His thesis was on the depiction of women in film. Once he obtained his PhD he went on to teach social policy at Boston University as an adjunct assistant professor.

In 1983, he left academia to join the family business. He worked in an executive position as a liaison between General Cinema and the film production industry in Hollywood. In 1985, he founded a production company called Chestnut Hill Productions, which produced a number of films, TV shows, and commercials. In 2011, Lurie won an Academy Award as the producer of the documentary Inside Job.

Today, Jeffrey Lurie has a net worth of $2 billion. His Eagles, which he bought for $195 million, are now worth $2.4 billion. And now he's heading back to the Super Bowl for the first time since 2004.