On Friday morning, news broke that Amazon was planning to buy high-end grocer Whole Foods for $13.7 billion. Investors and consumers were both very excited by the prospect of Whole Foods being run by Amazon. As a result, Amazon's stock surged. And as a result of that surge, Amazon founder Jeff Bezos' net worth increased $1.8 billion, to give him a net worth of $85 billion. That's the highest his net worth has ever been and the closest he's ever been to taking the top spot as the richest person on the planet. At his peak, Jeff was within $5 billion of tying Bill Gates as the world's richest man, and $5 billion and one cent from being the richest man in the world.

Bezos is still focused on aggressively expanding Amazon. Gates, on the other hand, is more focused on giving most of his money away. Gates and his wife Melinda created the Giving Pledge alongside Warren Buffett in 2010. The pledge asks billionaires to commit to giving away at least half of their money during their lifetimes. Bezos is not one of the 168 current members of the Giving Pledge. 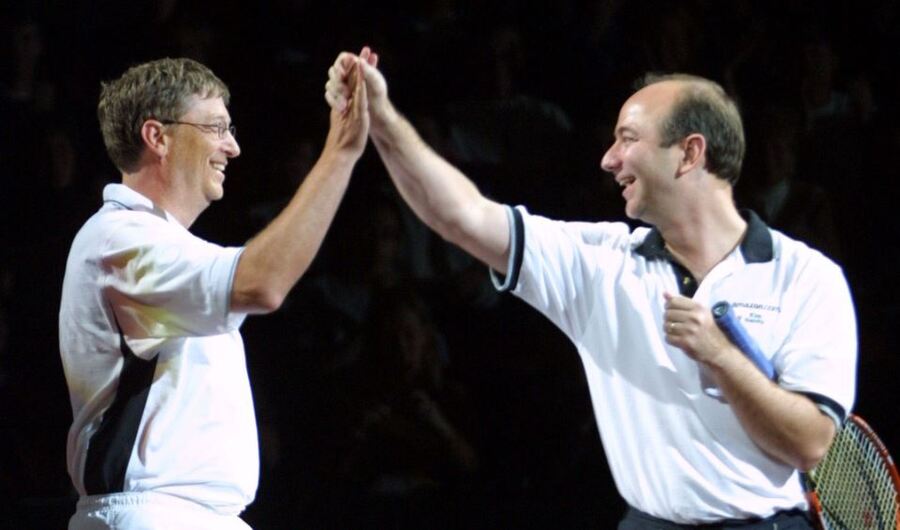 Bill Gates, 61, currently has a net worth of $90 billion and has held the title of the world's richest person for the past four years in a row. Meanwhile, 53-year-old Bezos has been slowly and methodically working his way up the list of the world's richest people since he first appeared on the billionaire's list in 1999, just three years after Amazon was founded.

Gates stepped down as head of Microsoft in 2000. He remains at the top of the rich list despite his philanthropic giving thanks to his 2% ownership of the company and a portfolio of extremely diversified investments and assets.

Meanwhile, Bezos has been aggressively expanding Amazon's footprint. In addition to Amazon and Whole Foods, Bezos also owns the Washington Post and the space exploration company Blue Origin. Bezos has no intention of slowing down anytime soon. He is infamous for his mindset of treating every single day at Amazon as if the company is still in the startup phase. This philosophy has carried over to Blue Origin, where the company motto is "Gradatim Ferociter," which means "step by step, ferociously."

Bezos founded Amazon in 1996 after writing the business plan while on a cross country road trip with his wife. He has taken the company from an online bookseller to an e-commerce behemoth with annual revenue of more than $135 billion and current market cap of $480 billion.