Fresh off his 10 minute ride into space on a phallic shaped spacecraft, Jeff Bezos has returned to earth with an idea. Or, rather, an offer. Jeff has an offer for NASA, which, in his words is a chance to correct their mistake of choosing Elon Musk's SpaceX over Bezos' Blue Origin for a moon landing project.

Jeff Bezos' space exploration company has offered to foot the bill of up to $2 billion for the first two years of a contract to manufacture a moon lander and put NASA astronauts on the moon again. The company's fixed-price option would protect NASA from any cost overages. Blue Origin is also offering to develop and launch a moon landing mission at its own expense. 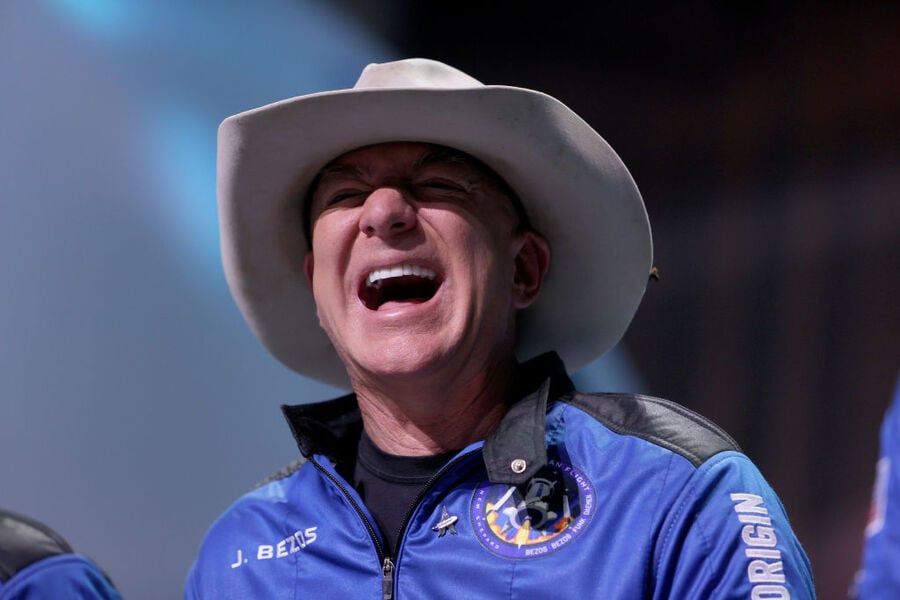 Bezos' offer would make Blue Origin a less expensive option than the one NASA made with SpaceX. Elon Musk's space exploration company was awarded the Human Landing System contract by NASA in April 2021. The following month, Bezos' Blue Origin filed a protest with the Government Accountability Office against the $2.9 billion contract calling the contract "flawed" and accusing NASA of "moving the goalposts at the last minute." The SpaceX contract will remain suspended until the protest has been ruled on.

Bezos wrote an open letter to Bill Nelson, the Administrator of NASA in which the richest man in the world pitched his plan to keep the Human Landing System program competitive by having NASA choose two companies to build the spacecraft to take multiple astronauts to the moon instead of just one astronaut. "Instead of this single source approach, NASA should embrace its original strategy of competition," Bezos wrote. Later he added, "Without competition, a short time into the contract, NASA will find itself with limited options as it attempts to negotiate missed deadlines, design changes, and cost overruns."

Bezos' open letter basically accused NASA of giving preferential treatment to SpaceX. "In April (prior to your confirmation as NASA administrator), only one HLS bidder, SpaceX, was offered the opportunity to revise their price and funding profile, leading to their selection. Blue Origin was not offered the same opportunity. That was a mistake, it was unusual, and it was a missed opportunity. But it is not too late to remedy. We stand ready to help NASA moderate its technical risks and solve its budgetary constraints and put the Artemis Program back on a more competitive, credible, and sustainable path."