Jeff Bezos' Net Worth Through The Years

The divorce of Jeff and MacKenzie Bezos has been finalized. Doesn't that feel like it happened really fast? After all, they just announced their separation in January. I guess when you've got a net worth (before the settlement) of $150 billion, you can afford to speed the process along if the divorce is amicable – which it appears Jeff and MacKenzie's was. In the divorce settlement, MacKenzie received 25% of Jeff's shares in Amazon worth $35.6 billion. This gives her about 4% of the company, making her the third largest shareholder. Jeff will have voting control over her shares, ensuring that the former couple doesn't use the stock as a weapon of spite or revenge.

When Jeff and MacKenzie met in 1992, they both worked for the investment firm D.E. Shaw. He was a vice president, she was an administrative assistant who'd recently graduated from Yale. Jeff surely was making a nice salary at the time but nothing earth shattering. In late 1993, he decided to start an online bookstore. He quit his job at D.E. Shaw. He and his new wife MacKenzie set out for Seattle from New York City. She drove. He wrote the business plan for what would become Amazon. He founded Amazon in the garage of his rental house on July 5, 1994 after borrowing about $300,000 from his parents. He named the company Amazon in part because is began with an A, the first letter in the alphabet and also after South America's Amazon river. Bezos warned early investors that there was a 70% chance that Amazon would fail or go bankrupt. 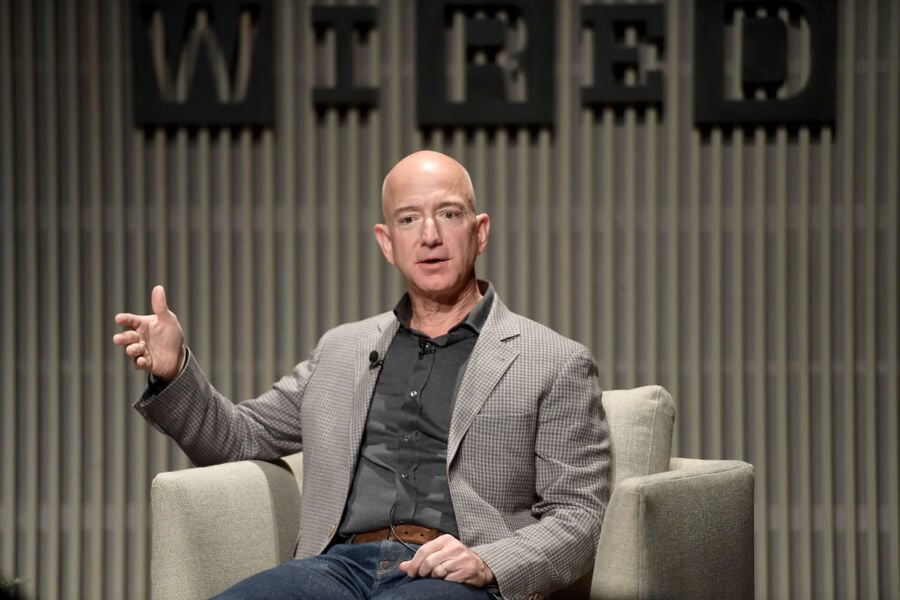 Three years after Jeff Bezos founded Amazon, he took it public. The day of the IPO, Amazon's stock topped out at $18 a share, giving Bezos a net worth of $12 billion. At the peak of the original dotcom bubble, Amazon stock hit a high of $106 per share. By June 1999, Jeff Bezos had a net worth of $10 billion.

Bezos used the bulk of the money earned during Amazon's IPO to finance aggressive growth an the acquisition of smaller competitors. In 2000, Bezos borrowed $2 billion from banks as Amazon's cash balances were only $350 million. The company nearly went bankrupt, causing him to lay off 14% of the workforce and close a number of distribution centers. After the dotcom bubble burst, Amazon's stock sank to an all time low of $5 per share in October 2001. At that point Jeff's net worth sank to $2 billion.  Revenue stayed stagnated through 2002. By 2003, Amazon had rebounded from the brink and turned a profit of $400 million.

From that point forward, Amazon has flourished and Bezos' net worth has been growing by leaps and bounds. Amazon continued to expand its core business as well as develop AWS, Amazon Web Services. Bezos founded his space exploration company Blue Origin and bought The Washington Post. In July 2015, Jeff Bezos had a net worth of $50 billion. Remember when we all thought that was pretty amazing?

Between July 2015 and January 2018, Jeff Bezos doubled his net worth from $50 billion to $100 billion. By September 2018 he was worth $170 billion. It seemed there was no limit to how high his net worth could go. Then, in January 2019, Jeff announced that he was divorcing MacKenzie after 25 years of marriage. We all wondered how big of an impact this would have on Jeff's then $150 billion net worth. Well, now we know.

On April 4, 2019  Jeff and MacKenzie announced that they had reached an amicable resolution of their divorce where she will be given $35.6 billion worth of Amazon stock. Jeff will retain 75% of his former stake and will have voting control over MacKenzie's shares. She will not have any ownership in The Washington Postor Jeff's space company Blue Origin. It's unclear how the couple decided to split their various homes and jets. Jeff's net worth immediately following the announcement became $114 billion.

If you're keeping track, it took Jeff just three years to become a billionaire after launching Amazon in July 1995. It took him 20 years to make $50 billion, but then it only took another 2.5 years to make his second $50 billion, for a total of $100 billion. And then it only took another seven months to make his third $50 billion, for a total of $150 billion. And then he lost $36 billion in an instant with the stroke of a pen…or shall we say penis? At nearly the same time as his divorce was announced, his affair with Lauren Sanchez was revealed. Jeff and MacKenzie have kept the details of all of that very private despite the press' efforts to unearth dirt.

One final point: At one point in late 2018, a single share of Amazon traded for $2,050 So, if you had been smart enough to take $10,000 and buy shares of Amazon in October of 2001 when it was worth $5 per share, you could have had $4.1 million before counting any dividends that they may have been issued over the years.