Today has been a very eventful day in terms of extreme net worth accomplishments. First off, earlier today Elon Musk joined the centibillionaire club as his net worth topped $100 billion for the very first time. Elon started the day with a net worth of $99 billion and ended with $101 billion as Tesla stock soared to yet another insane all-time high. Elon's net worth has increased $73 billion since January 1st. Not to be outdone, Jeff Bezos' net worth has increased $87 billion since January 1. That $87 billion increase allowed the Amazon founder's net worth to hit a cool $202 billion for the first time this afternoon. A truly stunning achievement. Is he the richest human being of all time? Let's talk it out…

Jeff Bezos is the richest person in the world thanks to his 58 million shares of Amazon. That's roughly 11% of the company's total outstanding shares.

Today AMZN closed at an all-time high of $3,441.85 per share, with a market cap of $1.72 trillion. When you multiply 58 million (shares) by $3,441.85 (price), you get $199.62 billion. When you add cash (he sells around $1 billion worth of Amazon shares every year) plus various other assets like roughly $1 billion worth of Google (he was a very early investor) and subtract debt, you comfortably arrive at a total net worth of $202 billion. 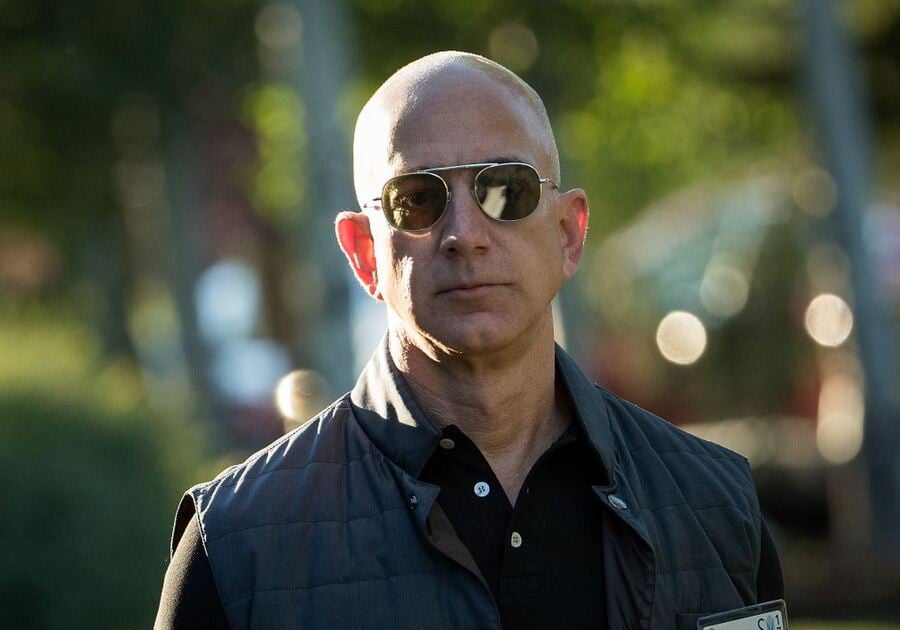 But keep in mind, at one point Jeff owned 16% of Amazon. As you probably know by now, Jeff forked over a sizeable fortune after divorcing MacKenzie Bezos (now known as MacKenzie Scott).

That 16% stake made Jeff a billionaire for the first time in June 1998. His net worth peaked at $12 billion during the dotcom bubble then crashed to $2 billion at the all-time lowest crash point of October 2001. You could have bought a single share of Amazon for $5 back then. A thousand dollars worth of Amazon bought at that point would be worth $688,200 today. Just FYI.

On April 4, 2019, Jeff and MacKenzie announced that they had reached an amicable resolution where he would hand over 4% of that 16% stake. Jeff's net worth was immediately reduced to $115 billion, while MacKenzie instantly became one of the wealthiest people on the planet with a net worth of $36 billion. Jeff's stake has since dropped from 12% to 11%.

With Amazon at today's market cap of $1.72 trillion, MacKenzie Bezos' net worth is $66 billion.

If you can do some simple math, you might see where I'm heading.

Had Jeff and MacKenzie never divorced, today Jeff Bezos would have a net worth of:

Instead he has $202 billion, which easily makes him the richest person in the world. He is literally $77 billion richer than second-richest person in the world, Bill Gates, who has a paltry $125 billion net worth. But there's a caveat with Bill Gates: Bill has given more than $50 billion away to charity already. Had he not done that, his net worth would be around $175 billion. Still less than Jeff Bezos' $202 billion, but not quite as shockingly different. And while we're talking about billionaires who have given away massive fortunes, Warren Buffet would have a net worth of $118 billion today (instead of $81 billion) had he not donated approximately $37 billion to various charities and foundations.

As of this writing, MacKenzie is the richest woman in the world, with a net worth of $67 billion.

How does Jeff stack up against the richest human beings of all time inflation adjusted?

At $202 billion, Jeff is $17 billion richer than Anderson Cooper's great-great-great-grandfather, Cornelius Vanderbilt, who had an inflation-adjusted peak net worth of $185 billion.

Unfortunately, Jeff still has quite a way to climb before he tops Andrew Carnegie's $310 billion inflation-adjusted fortune and John D. Rockefeller's $340 billion. He's roughly 50% of the way to Mansa Musa's $400 billion net worth. So he has some goals to hit still!

Congrats to Jeff on hitting $202 billion. It's honestly hard to fathom.