By Brian Warner on January 9, 2018 in Articles › Billionaire News

Amazon.com's stock price has been on a slow and steady upward march for the last year. One year ago, a single share of AMZN traded at $790. By mid-2017, AMZN had jumped to $970. On November 24, AMZN hit $1186. At that point Jeff Bezos' net worth topped $100 billion for the first time and he became the richest person on the planet. And with 2018 underway, AMZN and Jeff Bezos have now slowed down a bit.

As of this writing, AMZN is trading at $1257 a share. At that level, Jeff Bezos' net worth is $105 billion. Jeff owns 78.9 million shares of Amazon so at $1250 per share, his AMZN stake alone is worth $99 billion. Jeff also owns a $3 billion stake in the space exploration company Blue Origin and has around $3 billion worth of cash, equities, real estate and other investments.

At $105 billion, Jeff is the richest person of all time… Sort of. This might get tricky, so bear with me… 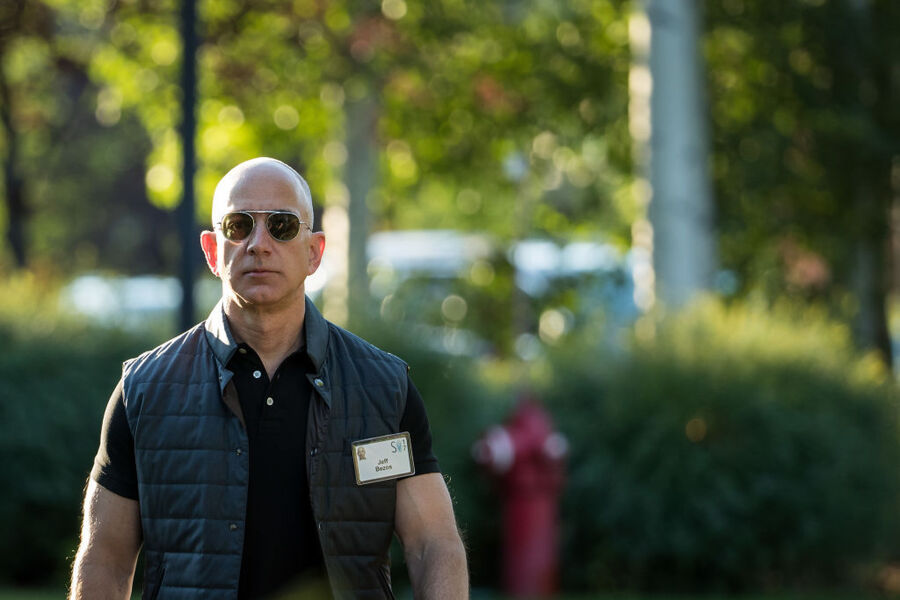 When evaluating the richest people of all time, the big question one must consider is inflation. For example, you know how when you watch a TV from the 50s and someone talks about buying a gallon of milk for a nickle? That's inflation. Milk hasn't inherently gotten more expensive, for a variety of technical reasons, a dollar today simply has less purchasing power than it did 50 or even 10 years ago.

For example, when Andrew Carnegie sold Carnegie Steel to JP Morgan in 1901, the sale price was $480 million. It was the largest sale of a company in history up to that point by a factor of 10. Today Jeff Bezos' net worth fluctuates by $480 million every hour.

If you want to see a full and detailed breakdown of the richest people of all time after adjusting for inflation, please read this article. If you read that article, you'll see that when accounting for inflation, at least 15 men in history (that we know of) have died with an inflation adjusted net worth worth greater than $105 billion. Some notable examples include Henry Ford who was worth $199 billion at the time of his death, Andrew Carnegie who was worth $310 billion and John D. Rockefeller who was worth $340 billion. But to be clear, none of those men actually had hundreds of billions of dollars in their bank accounts, they had far far far less.

Who was the richest person of all time after adjust for inflation? Most scholars and researchers agree that honor belongs to King Mansa Musa. Mansa Musa lived from 1280 – 1337 and ruled the Malian Empire which covered modern day Ghana, Timbuktu and Mali in West Africa. Mansa Musa's shocking wealth came from his country's vast production of more than half the world's supply of salt and gold. Musa used his wealth to build immense mosques that still stand today, nearly 700 years later. It's conservatively estimated that Mansa Musa was worth an inflation adjusted $400 billion at the peak of his empire.

But here's the thing about really old historical figures like Mansa Musa – Every estimate of their net worth and wealth is somewhat hypothetical. There is no detailed physical record of exactly how much gold he controlled. Much like King Solomon (another figure many people believe to be the richest person of all time) there are plenty of stories about enormous wealth, but none of these stories are scientifically and historically verifiable.

To be clear, we still believe Mansa Musa is the richest person of all time, but for my money, I prefer comparing the fortunes of people like Jeff Bezos to more recent historical figures like the Carnegies and Rockefellers. It's just a bit more fun and real.

So how is Bezos the richest person of all time?

Technically speaking, Jeff Bezos' $105 billion fortune is the largest non-inflation-adjusted fortune in human history. He is the first person to control $105 billion in modern, accountable assets and dollars. Jeff's $105 billion tops the record set by Bill Gates in 1999 when at the peak of the dotcom bubble the Microsoft founder's net worth hit $101 billion. That $101 billion is worth $140 billion today after adjusting for 20 years of inflation.

And there's one final caveat! One must recall that today Bill Gates has a net worth $90 billion. That $90 billion net worth is AFTER Gates has given away $3 billion in cash and 700 million shares of Microsoft to various charities. When you add it all up, Bill has given away roughly $62 billion of his personal fortune over the last 10 years. Had Gates not donated those shares, today he would have a non-inflation-adjusted net worth of $152 billion.

In order for Jeff Bezos to top a $152 billion net worth, Amazon's market cap would need to grow from today's $600 billion to around $900 billion. And if you think that sounds crazy, Apple's market cap has recently fluctuated between $900 billion and $1 TRILLION.

Where do you think Jeff's net worth will be in a year?