Jeff Bezos' Net Worth Has Increased By $75 BILLION Since January

Jeff Bezos just passed a milestone. On Monday, he saw his fortune increase by $13 billion on the strength of Amazon's stock. While that is likely to be wiped out today, it doesn't matter much. Bezos is worth $190 billion and $75 billion of that has been added to his net worth since January. That $13 billion from Monday, July 20 sets a single-day record for the largest financial gain since 2012. The increase is due to the 7% gain in Amazon stock on Monday. As of  Tuesday, July 21, Amazon's stock has slid just under 2% to $3,135. Bezos' $75 billion gain in the first seven months of 2020 is also an impressive feat and puts Bezos on track to be the first trillionaire in the world by 2026. Amazon is valued at over $1 trillion now.

Target has a market cap of $60 billion.

Starbucks has a market cap of $88 billion.

McDonald's has a market cap of $143 billion.

Costco has a market cap of $145 billion.

Salesforce has a $172 billion market cap.

Oracle has a $176 billion market cap.

Between the Dow, Nasdaq, and S&P, only 30 companies of the 630 combined companies on the three indexes have a higher market cap than Bezos' personal net worth. Comcast and ExxonMobil are worth more than $190 billion, but not by much. Bezos can catch up and pass those companies too.

Bezos isn't the only billionaire who has seen his net worth grow during 2020. Despite much of the world being shut down due to the global coronavirus pandemic, 10 billionaires have seen their net worth grow by at least $10 billion.

Most of these 10 lucky richer billionaires are in the technology industry. Six of them are from the U.S., three are from China, and one is from India. 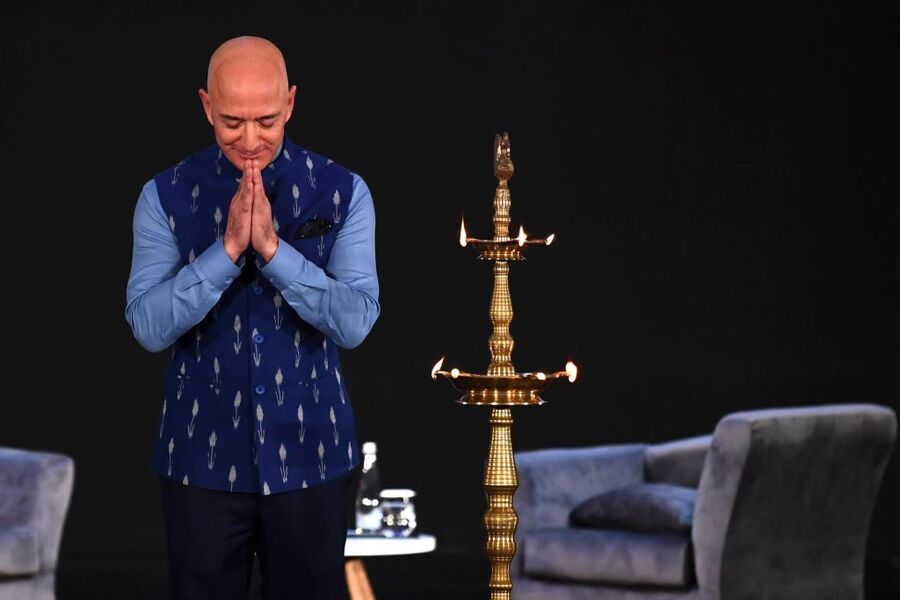 Zoom has skyrocketed in popularity since the Covid-19 shutdowns began. Companies are using Zoom for meetings, families are using it to keep in touch with loved ones outside of their household, friends are having Zoom parties, and people are doing yoga, Bar Method, HIIT, Zumba, and all kinds of workouts on Zoom. All of these new users have pushed founder Eric Yuan's net worth up $10 billion in 2020. He owns 19% of Zoom.

Colin Huang founded Pinduoduo in 2015. The app is similar to Groupon and is the third-largest e-commerce platform in China. During the first quarter of 2020, Pinduoduo's active users grew by 68%. Revenue grew by 44% in the same period. Overall, his net worth is up by $10.3 billion this year. Huang recently stepped down as CEO and reduced his stake in his company from 43.3% to 29.4%. He will remain chairman of the board.

Mukesh Ambani is the richest man in India and the head of Reliance Industries and Reliance Jio. Mukesh has the hottest and fasting growing mobile telecommunications business in India. Mukesh has been the driving force behind a push to bring India into the 21st century in its telecommunications industry. Mukesh has spent $35 billion of Reliance's money to bring the first all 4G wireless network to India, called Reliance Jio. This allows him to offer free phone calls and exceptionally inexpensive data and give 1.3 billion people access to global tech and e-commerce giants.

Ma Huateng, aka Pony Ma, is the richest man in China. He's the founder and CEO of Tencent, which runs the social media platform WeChat, similar to What's App. WeChat was released in 2011 and is the world's largest standalone mobile app. WeChat has over 1 billion active users every month.

Mark Zuckerberg has seen his net worth increase by nearly $15 billion so far in 2020, which pushed him closer to the $100 billion mark. He recently announced an initiative to quadruple testing for the coronavirus in the San Francisco Bay Area through his foundation the Chan Zuckerberg Initiative in conjunction with Stanford and UCSF.

Qin Yinglin is a Chinese pig farmer. It just so happens that there's a pork crisis in China after an epidemic of African swine fever led to the deaths of millions of pigs. That sad situation pushed the price of pigs to an all-time high and, as a result, has made pig farmer Qin Yinglin a multi-billionaire. China is the largest pork market in the world.

Steve Ballmer is the former CEO of Microsoft. He owns the Los Angeles Clippers. A simple scroll through Getty Images reveals how much he loves owning the NBA team. He and his wife Susan recently gave $7 million to the gun control group Everytown Gun Safety. This donation is the latest in a string of gun control and ending gun violence contributions by the Ballmers over the years.

Jeff Bezos; ex-wife received 20 million shares of Amazon in April 2019 in their divorce settlement. At the beginning of the year, she was worth $37 billion. Today she's worth $63 billion, an increase of $26 billion thanks to the surge in Amazon stock. She is a member of the Giving Pledge, her ex is not.

On July 21, Elon Musk qualified for a $2.1 billion payout after a surge in Tesla's stock. This is his second big payday since May. This is the second of 12 trenches laid out in his 2018 compensation plan. Tesla has a current market value of nearly $300 billion.

Amazon founder Jeff Bezos' net worth has jumped to $190 billion, making him just $10 billion short of becoming a trillionaire.