As Jeff Bezos' Net Worth Re-Approaches $200 Billion, Check Out This Long-Lost 1997 Interview With The Future Richest Person In The World

By Brian Warner on April 27, 2021 in Articles › Billionaire News

As I type this message, Jeff Bezos' net worth is teetering near $200 billion. He's coming close to that incredible number after Amazon stock closed at $3,409 on Monday. That's not an all-time high, but it's very close. Amazon's all-time high of $3,552 was achieved in September 2020.

According to the company's most recent SEC filing, Jeff owns 58 million shares of Amazon, roughly 12% of the total shares outstanding. Those shares are worth $197 billion at today's closing price. By our calculation, when other assets and investments are included, Jeff Bezos' net worth right now is $199.5 billion. 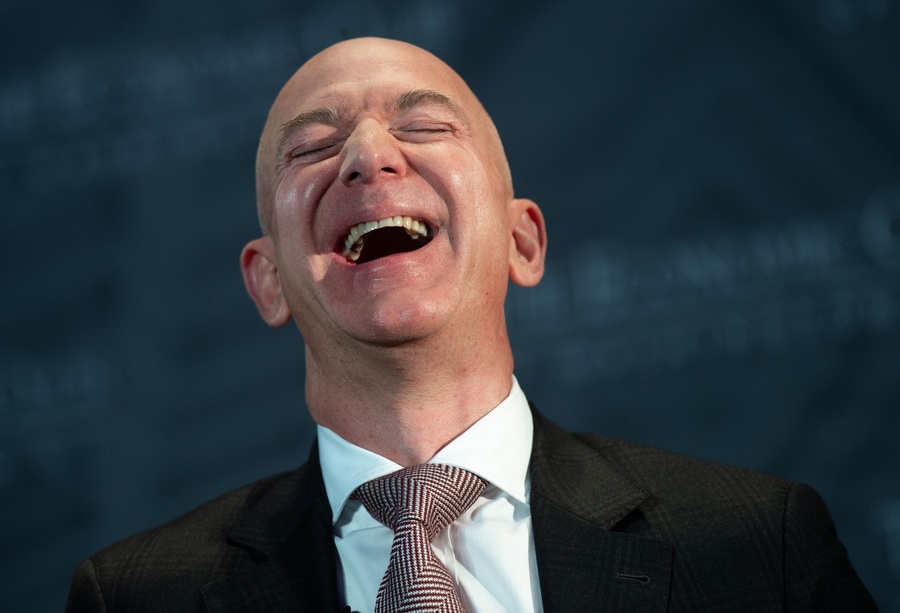 If Jeff does cross $200 billion, it won't be the first time he's hit that mark.

Elon's massive net worth gain was enough to propel him above Jeff to become the richest person in the world for the first time on January 6, 2021. Anything else happen in the news that day?

Jeff actually closed January 6 as the world's richest person after TSLA stock retreated slightly. The very next day, Elon solidly secured the crown for the full day and remained at the top slot for a little over a month, at which point Jeff became #1 again. From that point, Jeff has been the richest person in the world uninterrupted. Elon is currently around $10 billion "poorer" than Jeff with a net worth of $190 billion.

The history of Jeff Bezos' fortune is pretty incredible.

Amazon went public in May 1997. On the day of the IPO he was worth around $100 million. Just a few years later as the dotcom bubble expanded, Jeff's net worth topped $10 billion.

Then the bubble burst.

By September 2001, his net worth had sunk to $1.5 billion after the bubble exploded.

Over the next decade, his fortune fluctuated between $4 and $8 billion.

If Jeff still owned 70 million shares of Amazon, today he would be his net worth would be teetering on…

And while we're taking a trip down memory lane, let's jump back to June 1997.

Let's say you somehow were in the position to interview Jeff Bezos in June 1997. What would you have asked him? Would you have even known who he was or what Amazon did? Were you even alive???

A videographer named Brian Roemmele had that exact opportunity.

In what Brian describes as the "lost Jeff Bezos 1997 interview", Jeff lays out how he came up with the idea for Amazon, and the strategy he intended to employ to take over the world.

Jeff's thoughts are eerily spot on.

As you'll see, Jeff describes the internet in 1997 as being in "the Kitty Hawk stage of electronic commerce".  And YES, Brian starts the interview by asking "Who are you?" and "What is your claim to fame?". Imagine a time when you would have had to ask those questions to Jeff Bezos?

Check it out – it's only about 6 minutes– definitely worth your time:

FYI – at the time this video was filmed, Amazon had been a public company for TWO WEEKS.

Jeff was 33 years old and owned 40% of the company's outstanding shares. So Jeff's net worth while he was being filmed was…

Fast forward 24 years and $120 million is a rounding error to Jeff. It's literally less than he spent on ONE home in February 2020.

Where do you think Jeff's fortune will sit 24 years from now? How about your own fortune? What innovation today is at the "Kitty Hawk stage"? Extra credit for non-crypto answers 🙂