As Twitter Stock Soared To An All-Time High, Jack Dorsey's Net Worth Actually DROPPED $2 Billion. What?! How?!

By Brian Warner on February 26, 2021 in Articles › Billionaire News

As I type this article, Twitter's share price is sitting at an all-time high of $76. Twitter stock has absolutely soared in the last few months. The stock has more than doubled in a year. So, you might assume the net worth of company CEO/founder Jack Dorsey must also be equally soaring. You're probably picturing the awkwardly-bearded Dorsey off on a 10-day meditation retreat in French Polynesia celebrating silently with a stiff glass of carrot juice and an extra-long downward dog.

Unfortunately for Jack, Twitter's recent highs don't actually have that much of an impact on his net worth, which we currently peg at $14 billion.

In fact, Jack's overall fortune actually FELL by $2 billion in the last week, the same period when Twitter was reaching all-time highs. Why? How? Let's discuss… 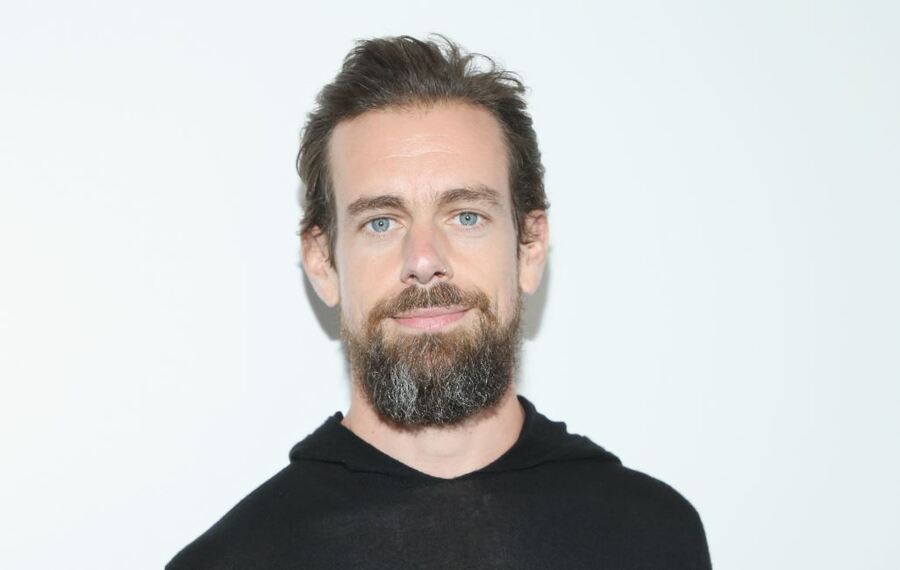 Most people probably assume that Jack Dorsey is the primary founder and only CEO that Twitter has ever had. In reality, Jack is a co-founder. He launched Twitter in 2006 alongside Biz Stone, Evan Williams and Noah Glass. Jack served as the company's first CEO but was reportedly forced to step down in 2008 by his co-founders and their venture capitalist backers because he was spending too much time on extracurricular hobbies like yoga and meditation retreats. Seriously.

During Jack's first few years of his second term as CEO, Twitter stock was a dog with fleas. On the day he became CEO again in 2015, Twitter traded at around $35. Over the next two years, the share price tanked, hovering in the $15-16 range until slightly improving in early 2018.

A year ago Twitter stock hovered in the $25-35 range. In early March, Jack Dorsey's net worth was just $3.3 billion. That's the lowest it's been in about 8 years.

As I type this article, a single share of Twitter would cost you $76. That's an all-time high.

This week's rise in Twitter's share price is being driven by an announcement that the company will soon release a "Super Follow" feature that will allow users to charge for tweets (with Twitter taking a cut of the fee). Twitter rose as much as 10% on the announcement.

I don't plan on ever using this "Super Follow" feature, so if you would like to hear some totally free brilliant musings on finance/celebrity/SEO and wealth, give me a follow:

Earlier today Twitter's market cap topped $60 billion for the very first time. It's a huge accomplishment for the company and a major validation for Dorsey.

Because Jack Dorsey doesn't own all that much Twitter stock. Jack owns around 2% of the company. By comparison, Mark Zuckerberg owns 30% of Facebook. The Google founders both own around 14% of Alphabet. Elon Musk owns 22% of Tesla.

A nice chunk of money but arguably not even enough to make him technically a billionaire after-taxes if he sold everything.

So how is Jack Dorsey worth $14 billion?

In reality Twitter is just a side-project for Mr. Dorsey. Jack's real job and the vast majority of his net worth actually comes thanks to a company called…

Square is a mobile payment/financial services company. If you've ever bought something at a farmer's market or from a food truck, you probably handed your credit card over to the merchant who swiped it in a little square card reader that was plugged into an iPad or iPhone.

Jack co-founded Square in 2009. The idea came to Jack after a friend (who then became his co-founder) complained about not being able to sell glass faucets and fittings because he didn't accept credit cards.

Square went public in November 2015, almost exactly two years after Twitter went public. On its first day of trading, Square had a $3 billion market cap. That was a major disappointment because the company's last private funding round valued the business at $6 billion.

Here's how the stock has performed since going public: 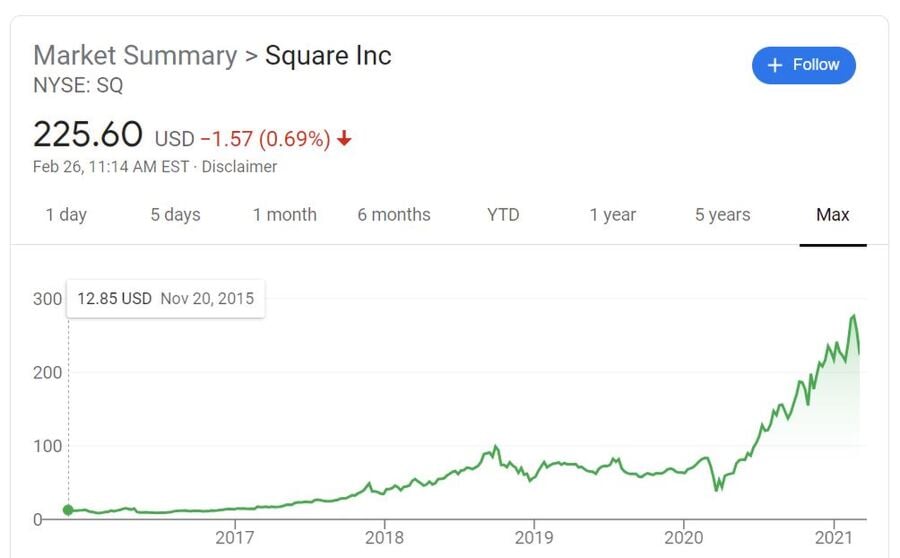 Jack is ALSO the CEO of Square, which has earned him some criticism when Twitter wasn't performing well. Lots of analysts and shareholders thought Twitter deserved a more "full-time" CEO.

That shareholder resentment was particularly strong as Square's stock rose from $12.85 on the day it went public… to where it stands today: $225.

With that rise, the company's market cap has risen from $3 billion to today's $101 billion.

Please recall that earlier today Twitter broke $60 billion for the first time. So Jack's side project is worth $40 billion more than the thing he's most famous for.

Jack owns a little less than 13% of Square. At today's $225 price per share, Jack's square stake is worth =

And while Square has had an incredible 12 months, if you look at the far right of the above stock chart you'll see it tanked in the last week.

Jack's net worth one week ago – February 19 – was $16 billion. This is how/why Jack LOST $2 billion in wealth while Twitter soared to new all-time highs.

And btw, not long ago Jack actually owned MUCH more of Square.

A year ago Jack owned 63 million shares of square (20 million more than he currently holds). On April 7, 2020 Jack announced he was moving $1 billion worth of his Square equity (20 million shares) to a newly-launched foundation he named #startsmall LLC.

With his announcement Jack posted a link to a Google doc where he he is tracking every single donation #startsmall makes. It's actually really cool. Here's a link to the doc, check it out yourself. You can see the foundation's current value and each donation it has made since launching.

Also, here's a screenshot. Check out cell B3: 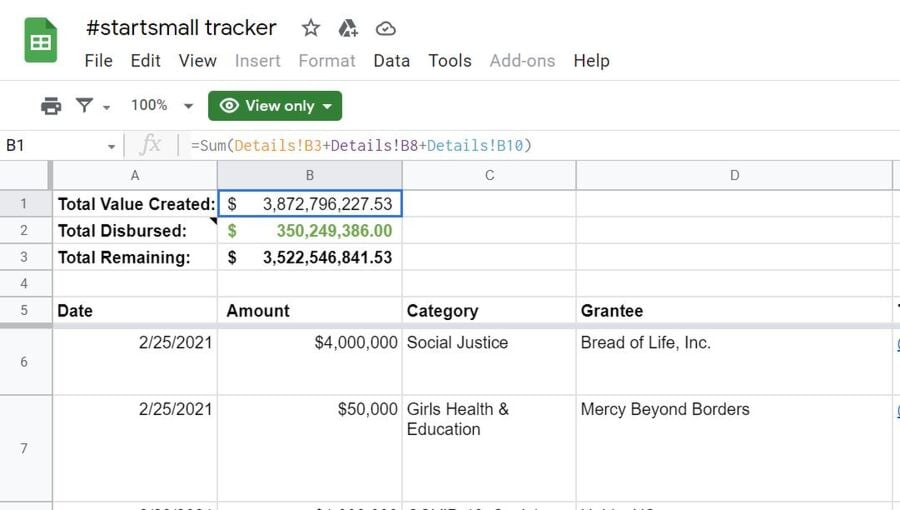 That's because thanks to the incredible rise of Square's stock price in the year since launching the foundation, Jack's original $1 billion donation has more than tripled.

And that's AFTER the foundation has already given away $350 million (which you can see in cell B2). According to cell B1, Jack's $1 billion donation has created $3.872 billion in value to date. In other words, Jack's charitable foundation is worth 3X than his Twitter stake.

What's your side project that's going to make you 10x richer than your day job?