It Took 40 Years, But Larry Ellison Will Finally Get To Be Richer Than His Nemesis Bill Gates

By Brian Warner on May 3, 2021 in Articles › Billionaire News

If you are a regular reader of CelebrityNetWorth.com, you probably know Larry Ellison as the guy who owns $1 billion worth of real estate in the United States – including the entire Hawaiian island of Lanai and this $80 million Florida mansion that he scooped up just a few weeks ago. You also know him as the guy who turned a $1 billion investment in Tesla into $10 billion and a seat on the company's board of directors. He owns fighter jets, a yachting team and a major tennis tournament. Through his movie producer daughter, Megan Ellison, he provided the funds that paid for blockbusters like "Zero Dark Thirty", "American Hustle" and "Foxcatcher." And we haven't even talked about Larry's primary source of wealth, the company he founded, Oracle. Larry's Oracle stock generates $1 billion in annual dividend payments and accounts for 90% of of his $90 billion net worth.

But even with all those accolades and accomplishments, for the last 40 years Larry has been driven by one burning truth that is at the core of his soul:

I'm not even exaggerating. Sure they might be pleasant to each other in the stands of tennis tournaments, a shared passion, but there is no love shared between these two software titans.

And now with today's announcement that Bill and Melinda Gates are divorcing after 27 years of marriage, Larry will finally get to accomplish a goal he has been grasping at for decades:

He'll finally get to be richer than Bill.

If Bill and Melinda Gates end up splitting their current $145 billion fortune, they would each be left with roughly $70 billion. That would allow Larry Ellison to finally out-rank Bill Gates, by $20 billion. Perhaps not the exactly how Larry wanted to achieve that feat, but I'm sure he'll take the win.

Oracle went public on March 12, 1986. Microsoft went public the very next day. Riding the wave of Oracle's huge prior-day success, Microsoft's bankers raised the company's opening price target from $16 to $21. When Microsoft was done trading on March 13, it had doubled Oracle's market cap… thanks largely to the trail blazed by Oracle.

That set the tone for the next two decades. Microsoft was #1. Oracle #2.

Ellison and Oracle still managed to carve out a highly-lucrative – but not quite as valuable – dominating position in the business software market.

Throughout the 1990s and 2000s, no one was more frustrated and angry over Microsoft's world dominance than Larry Ellison. Ellison was incensed that his company constantly had to take a back seat to Gates and Microsoft. It was especially maddening because he believed Microsoft's products were never the best available. Microsoft offerings were often just the only option available to consumers thanks to Microsoft's monopoly on the personal computer.

Ellison never missed an opportunity to public deride Gates. In every single interview and keynote speech he gave, one or more Gates insults would be unleashed.

When Microsoft was being investigated by the justice department for antitrust violations in the 1990s, guess who paid for private investigators to supply the feds with dirt? Larry Ellison. Ellison's investigators famously dug through trash dumpsters at several technology advocacy groups – that were publicly supporting Microsoft in its antitrust case – to prove that they were in fact FUNDED BY MICROSOFT. A brilliant move.

Guess who couldn't wait tear into Gates and Microsoft to a gaggle of reporters outside of a Senate antitrust hearing? Larry. And here's the amazing video that you should really watch:

And by the way, Larry wasn't wrong.

Today it's easy to think of Bill Gates as a lovable philanthropist, but he and Microsoft were kind of awful in the 1990s.

Microsoft regularly would copy all the best new software being created in the world, create their own less-good version and force it upon Windows users. The most blatant example was Netscape.

Netscape is largely responsible for the world wide web as we know it today and Microsoft did everything in its power to choke the company in its infancy.

And their rivalry wasn't limited to the business world.

Below is a photo of Bill Gates sitting just above Larry at a tennis tournament in 2017. 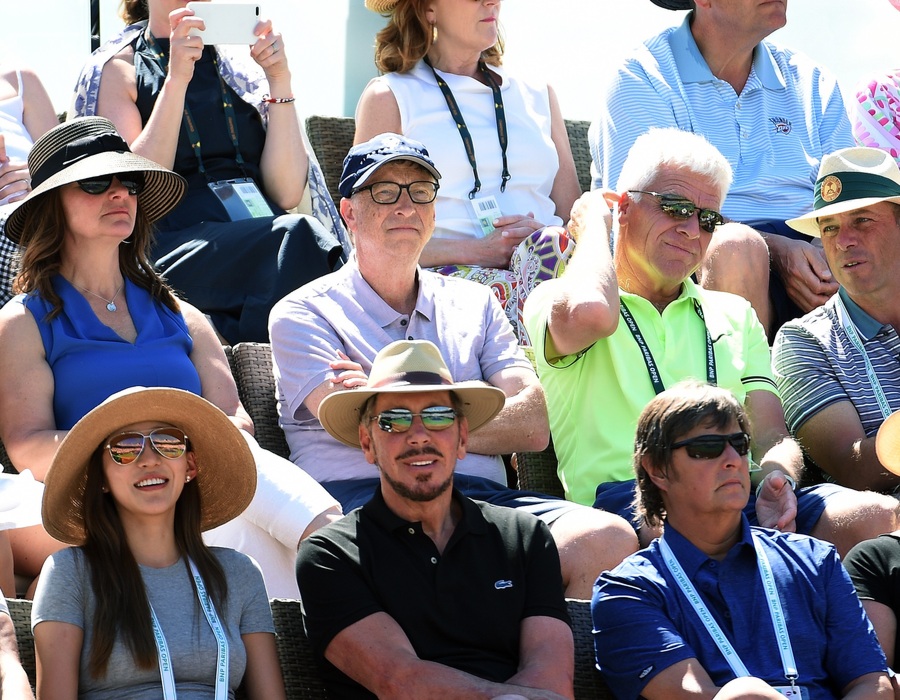 Why am I showing you this photo of Gates and Ellison at a tennis tournament? Because Larry has a mildly impressive habit of buying things that Bill Gates loves.

Remember earlier when we mentioned that Larry Ellison owns the Hawaiian island of Lanai? A purchase he made in 2012 for $300 million…

Coincidence? I think not.

Ellison did eventually sign The Giving Pledge, but not when Bill asked. Only when Warren Buffett made the overture.

So congrats to Larry Ellison on finally achieving a 4-decade goal. Oh and what's perhaps most impressive, Larry has accomplished this goal while being married and divorced himself… FOUR TIMES!