By Brian Warner on March 2, 2022 in Articles › Billionaire News

UPDATE: On Thursday morning, the Ministry for Economy and Innovation in the German state of Hamburg informed Forbes that their sources were not correct and reports of Dilbar's seizure are not true.

As you may have read from our previous coverage, in recent days Russian billionaires who are concerned that sanctions are about to drop, have been rushing to move their yachts out of European and American waters.

According to three sources that spoke with Forbes, German authorities operating in the city of Hamburg seized an $800 million yacht owned by sanctioned Russian billionaire Alisher Usmanov. [Again, these reports turned out to not be true…]

With a net worth of $19 billion, Usmanov is the fifth-richest Russian person in the world.

The 512-foot yacht, which is called "Dilbar," has been docked for maintenance with shipbuilders Blohm+Voss for the last several months. Usmanov spent an estimated $600 million over 4.5 years having Dilbar custom built by a German firm. Construction completed in 2016. Today the yacht is reportedly worth $800 million or more. And when you hear some of the features, you'll understand why…

More importantly, Dilbar has the largest indoor swimming pool ever installed on a yacht. The pool is 180 cubic meters.

Operating Dilbar requires a full-time crew of at least 80 people!

Dilbar was Alisher's mother's name and this is actually his SECOND yacht named in her honor. He sold the first iteration of Dilbar to a middle-eastern billionaire.

Here is Dilbar in better times back in April 2017 off the coast of Monte Carlo: 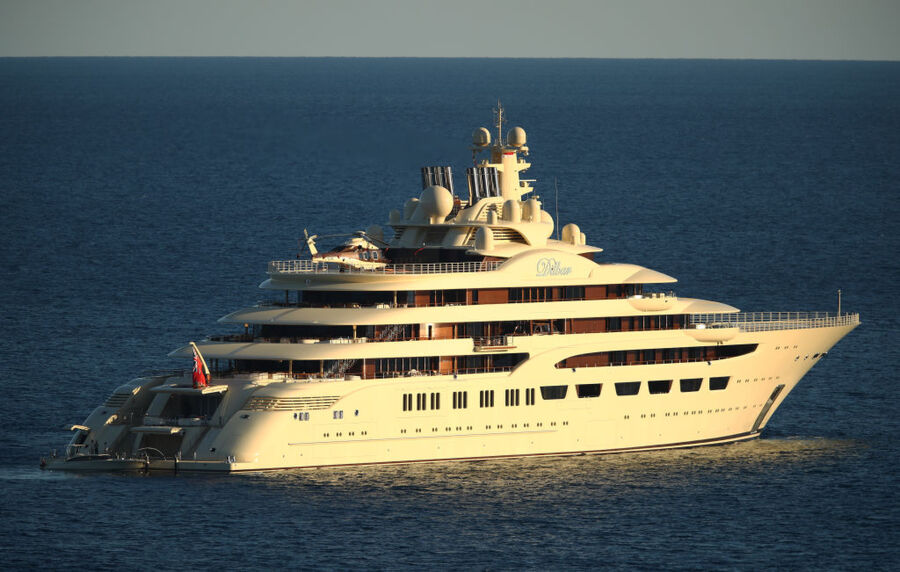 Alisher Usmanov earned his fortune as the majority owner of a conglomerate called Metalloinvest, which primarily manufactures steel. He also co-owns Russia's second-largest cellphone company, MegaFon, and one of the largest copper mining companies in the world, Udokan.

Interestingly, Alisher was also an early investor in Facebook along with fellow Russian billionaire Yuri Milner.