By Amy Lamare on November 26, 2019 in Articles › Billionaire News

The saga over Mohamed Hadid's Bel Air mega-mansion is ongoing. Over the summer we reported on the alleged bribes he paid to city inspectors and the reportedly falsified reports, and how his construction manager calls the structure unsafe. Hadid has been intent on building one of the biggest mansions in Los Angeles's Bel-Air neighborhood for years. The entire saga has been rife with accusations of intimidation, thievery, and bribery. Hadid bought the hillside plot of land in Bel Air for just under $2 million in 2011. At the time a ranch style house occupied the land. He immediately tore that  down and started construction on the house he was calling "The Modern House of Hadid." His neighbors called the house "The Starship Enterprise."

The enormous unfinished mansion on Bel Air's Strada Vecchia Road continues to be the bane of the neighborhood. Hadid has battled in court with neighbors who claimed the city of Los Angeles knew and failed to stop illegal construction. Investigators have delved into possible wrongdoing by a city building inspector assigned to look at the house. 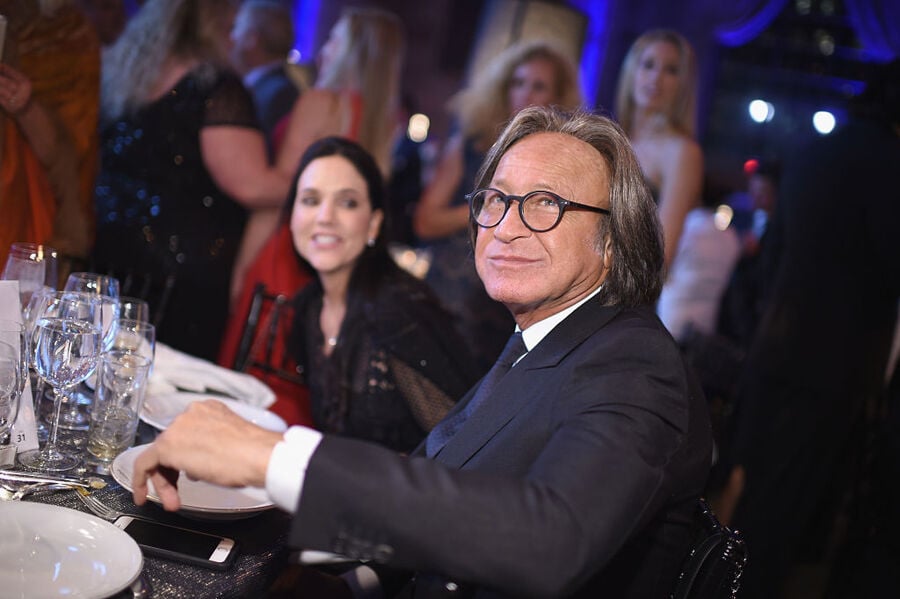 Three years ago, the L.A. City Council issued orders to Hadid demanding he discontinue construction. Hadid ignored them. In December, the City Council made the rather unusual decision to pursue criminal charges against him. Hadid ignored them and kept building. The plans for the house that were submitted to the city have very little resemblance to the structure that was built. Two huge decks that jutted out over the hillside and Hadid's 70-seat IMAX theatre were illegal. Additionally, the house was 31 feet higher than it was supposed to be and 9,000 square feet larger.

Now, Hadid claims to be so broke that he doesn't have the money to tear the eyesore down. L.A. City prosecutors have ordered him to demolish the half-built house, which would cost about $5 million. His attorney, Bruce Rudman told the Santa Monica court that the 71-year-old father of Gigi and Bella can't afford to tear it down.

The lawsuit Hadid is embroiled in was brought by his neighbors. The attorney for the neighbors of the half-built house have asked for a receiver to be appointed to take over the demolition. That person would charge Hadid an upfront fee of $500,000. Hadid's attorney told the court that his client can't even afford that. The attorney for the neighbors, for what it's worth, all but laughed in the face of the claims that Hadid is broke. Apparently, Hadid just bought a multi-million dollar home in Beverly Hills. Hadid's attorney said that his client could get a bank loan to tear down the house and build a new, more reasonable house on the land. But to do that, the Building and Safety Department would have to issue permits and so far at least, the city refuses to do that.

He said: "With just the current house demolished and no permits for a house to be built in the future, the bank would foreclose (on the current loans Hadid took out to build his  mansion) and the property would have to be sold."

Rudman also said that Hadid could get loans to retrofit the structure's current support piles that have been deemed unsafe. That would come at a cost of $1-2 million. The city has also rejected those plans, saying it can't be fixed that way, it can only be fixed by tearing down the whole house to get to the piles and replace them entirely.

The judge overseeing the case visited the Bel Air construction site to see first-hand if Hadid had made any progress in removing the house's illegally built third floor and pool deck, a partial demolition he ordered to make the structure safe and have it adhere to local planning regulations. He also wanted to check out the claims by the neighbors that there were illegally graded slopes, inadequate foundation supports, and unapproved retaining walls.

After his visit to the site, the judge remarked in court that he was struck by the steepness of the hill the house is built on and disconcerted by the piles supporting the house being tilted at angles rather than straight.

"If these piles failed and if this house came down the hill, I am positive in my mind that it would inflict severe damage on the (neighbors') properties below, if not destroy them. Are these piles structurally safe? What would happen if there was a 6.0 earthquake?"

This hearing is ongoing. It is expected that a decision of whether a receiver should be appointed or not will be made on November 20. Earlier this month LA city prosecutors filed a motion in a separate criminal case against Hadid ordering the house to be completely demolished by April 1, 2020. A decision on that motion is expected on December 13.