Inside The 8 Private Islands Selling For $78 Million

By Chris Kelley on August 3, 2016 in Articles › Billionaire News

In the market for your own private island? How about eight of them? A collection of exclusive small islands, just off the Connecticut coastline, is now officially for sale. The unique buy comes complete with eight islands, all with stunning views, most with their own homes – all for a grand total of $78 million.

The chain of private islands now listed for sale is part of the larger Thimble Islands archipelago, tucked into the Long Island Sound, off of the coast of Branford, Connecticut. Of the eight islands included in the $78 million price tag, nearly each one has its own home, according to Sotheby's International Realty.

After investing many years and millions of dollars, wealthy owners Edmund and Christine Stoecklein are bidding adieu to part of their beloved island collection. The Stoeckleins' archipelago escapes were used to house both family and friends during the summer months, but a move to Washington prompted the installation of 'for sale' signs on all but one of their island properties.

The largest property included in the private island collector's dream listing, reachable within a 5- to 10-minute boat ride, is the 8-acre Rogers Island. Doubtlessly the central selling point of this high-end listing, the island comes packed with a 13,000-square foot, 10-bedroom restored home that was originally built in 1900, a 4-bedroom guesthouse, an artist's studio, and a greenhouse.

But with such an extraordinary location, why would anyone want to stay inside for long? The island's owners have planned accordingly, setting the main house around a swimming pool, a tennis court, two piers and a Jack Nicklaus-designed golf putting green and tees. 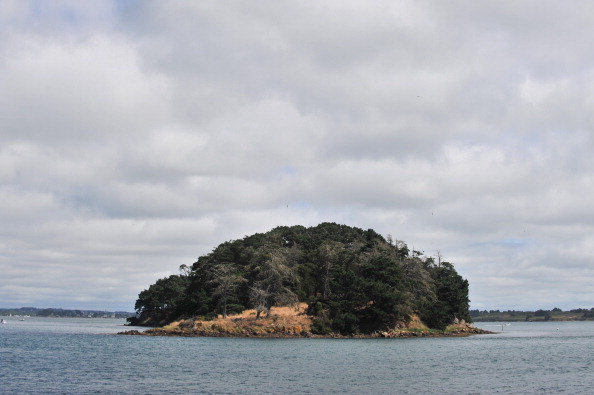 With seven other islands included in the listing, the $78 million sale is likely to attract boat lovers. Not but a short ride from Rogers Island, the listing includes islands such as the tiny, undeveloped Reel Island; the 1-acre Belden Island (pictured above) complete with a 4-bedroom clapboard house; and the larger Wheeler Island, a roughly 8.-acre property that comes with an 8-bedroom house.

Further along the cluster of islands, one lucky buyer will be able to enjoy the unique Cut-in-Two Island. As the name suggests, the property is made up of both East and West Cut-in-Two Island and their respective houses and guesthouses, with a small pedestrian bridge connecting the two.

Not in the mood for a boat ride to get home? No worries. The sale price also includes a nearby 2.32-acre waterfront property on the mainland. The ashore stop comes with several houses and boasts a private dock, perfect for keeping boats for travel to and from the islands.

Mrs. Stoecklein's former husband, John Svenningsen, founder of the party supplies company, Amscan Holdings, began the collection in the 1970s with the purchase of West Crib Island (the only island not included in the listing). Following his death in 1997, Stoecklein began buying up more property in the archipelago, leading up to the record-setting selling price of Rogers Island in 2003 for $22.3 million.

Two of the islands included in the $78 million sale were listed for a brief time in 2012 before being pulled from the market and upgraded.

The archipelago and its islands originally became a popular summer resort area in the late 19th century and maintain that status into today. In total, there are about 80 different houses among the entirety of the Thimble Islands. Both property sizes and property costs of the islands are hard to gauge, however, as they rarely switch hands.