Lynsi Snyder inherited the In-N-Out burger empire when she turned 35. She was recently found to have a net worth of $3 billion, making her the youngest female billionaire in the U.S. She is famously publicity shy due to two kidnapping attempts when she was younger. Now 36, she runs the beloved burger chain started by her grandfather in 1948. She's been integral in its growth. She's grown up and she recently sat down with Forbes for an exclusive interview.

Harry and Esther Snyder founded In-N-Out in the Los Angeles enclave of Baldwin Park. Today, In-N-Out's heart and soul is still in the neighborhood where the first burger stand opened 70 years ago. The company's offices are, appropriately, on Hamburger Lane. Next door is an In-N-Out, of course. Not far away lies the location of the first, simple, tiny, burger stand optimistically started by a newly married couple after World War II, when L.A. was going through its post-war growth spurt and everything was filled with hope.

Halfway down the block from the original In-N-Out lies a building behind a security fence. This is the top secret corporate test kitchen for In-N-Out. Unlike McDonald's and Burger King, who serve over 80 different items, In-N-Out has just 15 items on its menus: burgers, cheeseburgers, fries, soda, milk shakes and the famous Double-Double. The menu at In-N-Out doesn't change much. Lynsi added hot chocolate to it in 2018. Occasionally the company will swap out the brand of coffee it serves. Otherwise, things stay the same. That consistency is key to In-N-Out's business and popularity. 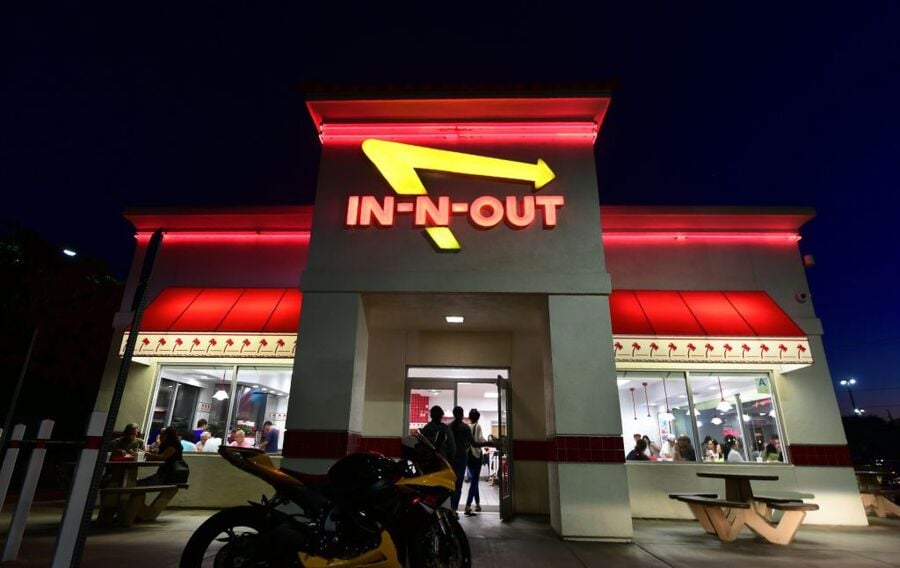 Lynsi, like the family members who've helmed In-N-Out before her, has no intentions to shake up the menu or structure of In-N-Out.

"It's not [about] adding new products. Or thinking of the next bacon-wrapped this or that. We're making the same burger, the same fry. We're really picky and strategic. We're not going to compromise."

The truth is, In-N-Out hasn't evolved much since that first burger stand in Baldwin Park in 1948. Their burger meat is never frozen. Their buns are baked each morning. Food is delivered to its 333 locations daily. All of the locations are company owned. In-N-Out does not franchise. Most of In-N-Out's locations are in California. Freezers, microwaves, and heat lamps are banned from all In-N-Out locations. The recipes for the famous burgers and fries have remained pretty much the same for 70 years.

In-N-Out's revenue should be more than $1 billion this year. Over the past eight years that figure has nearly doubled. The company is worth about $3 billion. Lynsi Snyder owns pretty much all of it after receiving chunks of it on her 25th, 30th, and 35thbirthdays.

Ten years ago, the idea of Lynsi taking over was… a bit scary. She got married right out of high school. She's battled drugs and alcohol. She's been married four times and divorced three times. But she came out of all of that with a need for stability. She found that in her religion –she is a devout Christian—and in the family business. She took over In-N-Out in 2010 determined to change the company as little as possible and to preserve its image of 1950s wholesomeness.

Under Lynsi's tenure, In-N-Out has opened more than 80 new locations. By comparison, Five Guys has opened 500 in the same period.

"I felt a deep call to make sure that I preserve those things that [my family] would want. That we didn't ever look to the left and the right to see what everyone else is doing, cut corners or change things drastically or compromise. I really wanted to make sure that we stayed true to what we started with. That required me to become a protector. A guardian."

Over the years, In-N-Out grew slowly and strategically. By 1976, when Harry Snyder died, there were 18 locations. His younger son Rich took over the family business. Lynsi's dad Garry was passed over over due to the opiate habit he had picked up after a motorcycle accident left him in chronic pain.

On December 15, 1993, Rich Snyder was killed when his private plane crashed. The day before he died, he had flown to Northern California to see then 10-year-old Lynsi, perform in a pageant.

After Rich's death, Guy and Lynsi were the only heirs to In-N-Out left. Guy was still battling his drug addiction. He was named Chairman of the company. Esther took on the role of President. Day-to-day operations of In-N-Out were handled by Esther. The company continued to expand. In 1997, In-N-Out had 124 locations. Then tragedy struck the Snyder family once again. In 1999, Guy Snyder died of a drug-related heart failure. In-N-Out had 140 locations and $200 million in revenue when Guy died. Esther Snyder was 79 years old and had lost her husband and both of her children. The only heir to In-N-Out was her then 16-year-old granddaughter, Lynsi.

Lynsi started working at In-N-Out when she was a teenager. Her first job was separating leaves of lettuce and working the cash register. She got married at 18 and took a job in the corporate merchandising department approving t-shirt designs. It was during this time that she started drinking heavily and smoking marijuana. She got divorced. She quickly remarried. That marriage was short lived. She calls it the black sheep era of her life. By the time she was in her early 20s, she was over it.

Lynsi moved through the various departments to learn the business. Meanwhile, then 80-year-old Esther was running day-to-day operations. Then Esther died in 2006. A long time In-N-Out executive became company president until 2010 when Lynsi took over. She was 27-years-old and running a business with 251 locations and $550 million in sales.

In 2011, Lynsi moved In-N-Out into Texas for the first time. In 2015, In-N-Out moved into Oregon. Last year, the company announced that it was expanding to Colorado—as soon as it finishes building the patty making facility and new regional headquarters. There is a long standing rule that all new In-N-Out restaurants fall within a day's drive of the closest warehouse, so the food stays fresh. After Colorado, In-N-Out has its eyes on New Mexico. Lynsi doesn't see In-N-Out becoming a national chain:

Of course, no matter where In-N-Out expands to, it has to deal with competitors—some with entrenched, cult like followings similar to what In-N-Out has in Southern California. In Texas, that's the 68 year old chain Whataburger. There are 674 Whataburgers in Texas. In-N-Out has 36 in Texas. Lynsi is betting that higher quality food will win over Texans. In-N-Out has a billboard campaign in Dallas with the tagline:

"No Microwaves, No Freezers, No Heat Lamps."

In California, In-N-Out is contenting with the invasion of Shake Shack, the $359 in sales New York burger chain. Shake Shack has nine locations in Southern California.

On the corporate front, Lynsi is popular with In-N-Out's 26,000 employees. She has a 99% approval rating on job reviews site Glassdoor.com. There is a good reason for these high marks. In-N-Out pays its restaurant employees $13 an hour—well above the $9-10 that other restaurant workers make. Part and full time employees can enroll in dental, vision and life insurance programs. Full time employees get health insurance and paid vacation.

The average manager of an In-N-Out store has been with the company for 17 years and makes $163,000. That is more than a dentist or accountant in California. Managers also get profit sharing.

One question that is eternally asked of Lynsi and all the Snyders that went before her is how much would it take to buy In-N-Out from the Snyders? Or when will In-N-Out go public? Lynsi (and Guy, Rich, Esther, and Harry) have been asked this time and time again.

"We've had some pretty crazy offers. There's been, like, princes and different people throwing some big numbers at us where I'm like, 'Really?' " The plan never changes. "We will continue to politely say no to Wall Street or to the Saudi princes. Whoever will come…" — Arnie Wensinger, In-N-Out general counsel.

"It's not about the money for us. Unless God sends a lightning bolt down and changes my heart miraculously, I would not ever sell." – Lynsi Snyder