By Brian Warner on April 8, 2022 in Articles › Billionaire News

For those who have no idea who Brooklyn Beckham even is, he is the eldest child of superstar celebrity couple David and Victoria Beckham. He was born in 1999.

Nicola Peltz is an actress best-known for starring in the fourth installment of the Transformers film franchise, "Transformers: Age of Extinction." From 2013 to 2017 she starred in the A&E psychological drama "Bates Motel."

Considering the fact that David and Victoria Beckham have a combined net worth of $450 million, you might be assuming that Nicola is marrying-up with this union. In fact, the opposite is true.

Nicola's father, Nelson Peltz, is a multi-billionaire with a net worth roughly 4x David + Victoria.

Below we tell the story of how Nelson Peltz earned a massive fortune out of thin air and his connection to Michael Milken and Donald Trump.

Here's Nelson Peltz (left) standing with Rupert Murdoch (on the right) at a benefit in 2006: 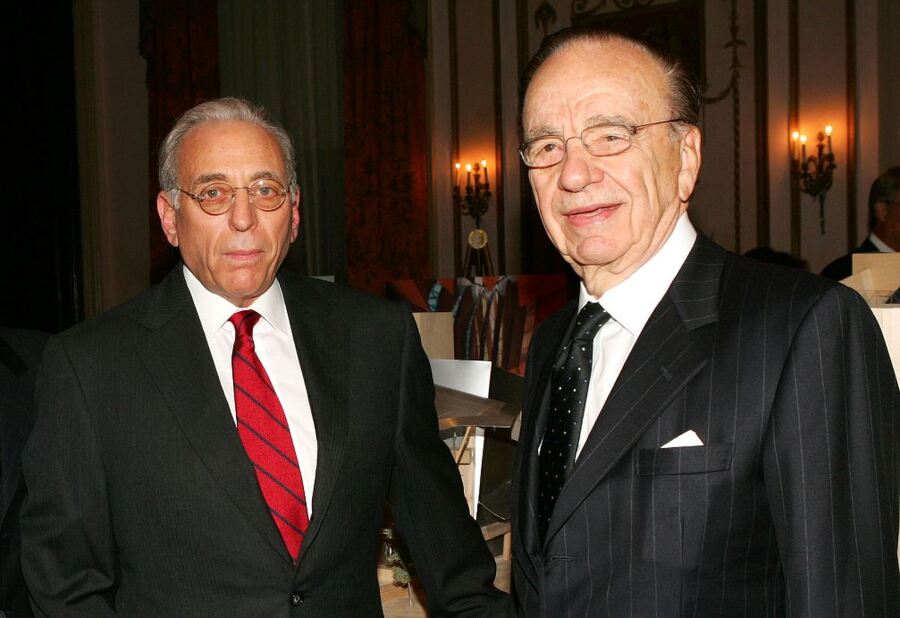 Nelson Peltz was born on June 24, 1942 in BROOKLYN, New York. Fun coincidence! BTW, Brooklyn Beckham was so named because that's where Victoria and David were when they found out she was pregnant. It is NOT (contrary to popular legend), where he was conceived.

Nelson briefly enrolled for his undergraduate degree at the University of Pennsylvania's Wharton School. He did not graduate. Had he stayed all four years, he might have shared a class or two with future President Donald Trump who transferred into Wharton in 1965.

Instead, Peltz skipped off to Oregon where he intended to become a ski instructor. For whatever reason he actually ended up back in New York working for the family business, A. Peltz & Sons, a wholesale food distributor founded by his grandfather Adolph in 1896. He made $100 a week.

Nelson fell in love with the family business and business in general. By the early 1970s, Nelson and his younger brother were put in charge of the entire operation. The Peltz brothers teamed up with one of Nelson's friends, Peter May, and went on a multi-year acquisition spree. They also renamed the company Flagstaff Corp. By gobbling up dozens of smaller distribution businesses, the Peltz brothers and Peter May increased annual revenue from $2.5 million to over $140 million. They took Flagstaff public and started looking for a new business to acquire. But by now their appetite had grown exponentially.

Junk In the Trunk

Armed with a little bit of cash and a lot of ambition, Nelson and Peter May set out looking for a fat new acquisition. They sniffed around a couple of companies, one of which was a bank called Beverly Hills Savings. Through this failed acquisition attempt, Peltz and May became close with a Beverly Hills-based investment banker named Donald Engel. Don Engel worked for a then-unknown investment bank called Drexel Burnham Lambert. Engel's boss was a man named Michael Milken.

For years, Milken had been preaching the benefits of "high yield" bonds… also known as "junk bonds". A high yield bond is essentially just debt raised at really high interest rates (like, 15% instead of 3%) because the borrowing company is unproven or has some issues. They earned the nickname "junk" because they are, by nature, risky.

Milken had proven over several years that the risk was… well… worth the risk. Milken consistently showed that an investor could beat the S&P 500 rate of return by investing in high yield debt. Sure, some of the bonds would default but an investor would make up for those losses from the bonds that succeeded in paying extremely high interest rates for a few years.

Drexel's job was to find people willing to put up the actual money that made up the debt. They took a commission for piecing together the financing.

In 1984, Peltz launched an acquisition bid for the National Can Corporation. At the time, Triangle's revenues were around $300 million per year. National Can's annual revenue was around $2 billion. So National Can was roughly 10X bigger. Also no one had ever heard of Triangle or Nelson Peltz. They were nobodies on Wall Street.

This kind of little guy taking on a giant scenario would have been unthinkable prior to the 1980s and Milken. Historically, acquisitions almost exclusively involved larger companies swallowing up smaller companies or equals merging. That was the natural order.

In what universe could Triangle offer to TAKE OVER National Can?

Long story short, Triangle bought National Can for $465 million. Out of that $465 million, Peltz/May and National Can only had to come up with $100 million. Best of all, most of that $100 million was in the form of paper stock – not actual cash from their own pockets. Roughly $365 million came through high yield "junk" bonds sold by Michael Milken.

Milken had a second brilliant innovation.

At the time Triangle offered to buy out National Can for $465 million, Peltz and May did not actually have $465 million sitting around in a bank waiting to be spent. They certainly did not go into the offer with $365 million in debt finance sitting in an account.

Milken and Drexel had to invent something that would enable this deal to happen. They ultimately landed on what became known as the Drexel "Highly Confident Letter", which was exactly what it sounds like: A simple letter from Drexel stating that the bank was "highly confident" it would raise the needed-debt once the deal was signed. Basically a promise. An IOU. "Don't worry about the money, it will be there when you need it."

After National Can accepted the $465 million offer, Drexel's salespeople hit the phones and raised every promised penny. Funds were transferred and Nelson Peltz owned a $2 billion can company.

This deal shook the finance world. All of a sudden, any company in the world could be gobbled up by a tiny corporate raider using imaginary paper made up practically out of thin air.

A year after closing on National Can, Peltz and Triangle used $570 million in Drexel bonds to buy rival American Can. The consolidated company was the largest can company in the world.

In 1986 Triangle re-financed its debt at much lower rates. It also had a fantastic revenue year that year, earning around $170 million in profits that made Peltz and May extremely wealthy. Revenues of the new consolidated company soon topped $4 billion per year.

In November 1988 Nelson and his partners sold Triangle Industries to a French company called Pechiney SA for $1.3 billion. Peltz and May each walked away with $400 million from the deal. That's the same as around $870 million a piece in today's inflation-adjusted dollars.

This was a significant moment in business history. Nelson Peltz and Peter May, two unknown small-time players, used imaginary money to buy a much larger company. They instantly refinanced the debt and ultimately cash out an $800 million profit.

A hundred Peltz/May wannabes showed up to Milken's Beverly Hills office the next day. 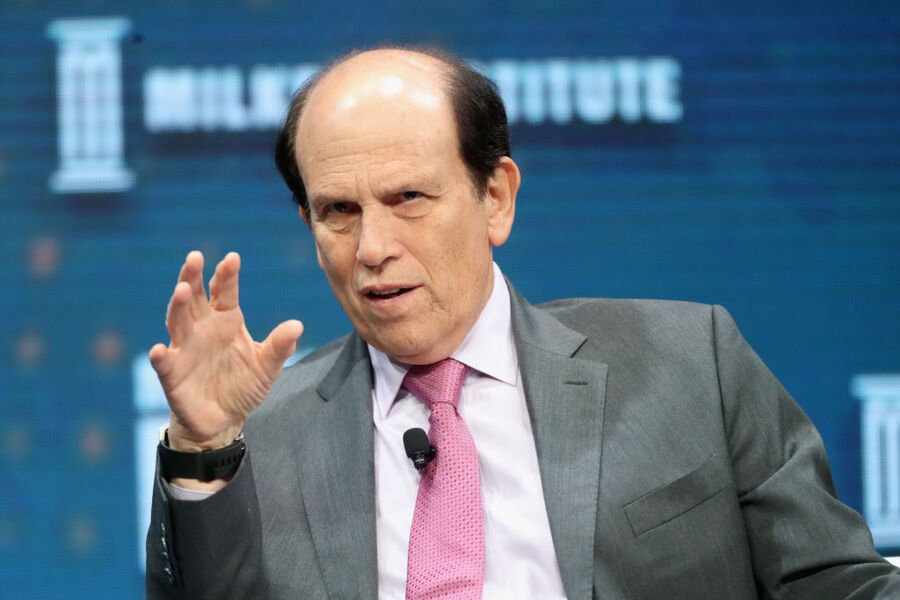 There's a much longer story here, but the short version is that the music stopped in the late 1980s for Milken and his junk bond warriors. The Peltz/May deal in retrospect was the dream scenario. As time went on, lower-quality greedy raiders took bigger and bigger risks on companies that were not nearly as sound as National Can.

In the late 80s, a bunch of junk-funded buyouts started defaulting on their interest payments. Many went bankrupt. This caused a ricochet of defaults up and down the economy. A bunch of Savings and Loans banks, where regular Americans parked their life savings, went belly-up after loaning money to finance junk debt deals.

On October 19, 1987 the Dow Jones Industrial Average plummeted 22%, the largest single-day drop in history. This day would later be known as Black Monday. The crash, plus a few subsequent crashes, wiped many average investors out. The economy slipped into a deep depression. The go-go-greedy-1980s party was OVER in an instant.

As the most-famous financier in the world – the king of junk bonds – Michael Milken was blamed by many for the crash. That wasn't a totally fair accusation. It's complicated.

However, it was true was that Milken had violated a number of securities laws during his rise. And along the way he earned hundreds of millions of dollars in annual base salary alone. In one year alone he earned over $500 million in salary/bonus. It was a record at the time.

Nelson Peltz was relatively unscathed by the market turmoil. Armed with hundreds of millions in liquid personal wealth he continued acquiring and flipping companies. One of the the best examples was Snapple. In 1997 he acquired Snapple from Quaker Oats for $300 million. He flipped Snapple to Cadbury's Schweppes just three years later for $1 billion.

Over the years Peltz, through his investment vehicle Trian Inc., has held large stakes in a number of publicly traded companies, including PepsiCo, DuPont, GE, Procter & Gamble and Molendez International.

Today Nelson Peltz has a net worth of $1.8 billion.

In addition to serving 22 months in prison, Michael Milken was banned from the securities industry for life and forced to pay $600 million in fines. He turned out relatively unscathed as well. Today Michael Milken's net worth is $3.7 billion. He's dedicated much of the last few decades to philanthropy so I'll give him points for that.

To the shock of many, on February 19, 2020, President Donald Trump announced he was granting Michael Milken a nearly-full pardon. I say "nearly-full" because Trump did not reprieve Milken from his lifetime ban from the securities industry.

Fun fact: Nelson Peltz reportedly spent years quietly lobbying for Milken's pardon. I mean, ya. The guy made him a fortune and launched his career. He owed his old friend!

The pardon announcement came three days after Trump attended a fundraiser at the home of… Nelson Peltz. Nelson's 13-acre Palm Beach estate is located 10 minutes up the street from the President's Mar-A-Lago resort.

Another fun fact: Before becoming the Mayor of New York then Donald Trump's personal lawyer, Rudy Giuliani was the lead prosecutor who gunned for Michael Milken's conviction. The two have apparently since become friends and have even shared a few meals together, burying the hatchet and reminiscing on old times.

And another fun fact: In the 1980s when Donald came up short on financing to complete his Trump Taj Mahal casino in Atlantic City, New Jersey, guess who he turned to…

Michael Milken and Drexel helped Donald raise $675 million in junk bonds at a 14% interest rate. Donald ultimately took on a total of $820 million in debt to complete construction of the Trump Taj Mahal. And in November 1990 Trump missed his first interest payment. According to legend, a month later when an $18.4 million interest payment was coming due, Trump's father Fred sent a lawyer to one of his son's casinos where he purchased $3.3 million in chips to keep the operation afloat. About a year after the Taj Mahal opened, it filed for bankruptcy.

But hey! The main point here is congrats to Brooklyn and Nicola on their nuptials!