How Two Amazing Bets Made Steven Spielberg A Multi-Billionaire

Steven Spielberg is a phenomenal filmmaker. He's one of the best of not just our time, but of all time. I could even see someone 50 years in the future still calling Spielberg one of the best directors, storytellers, producers, and filmmakers of all time. And as much money as directors make, let's face it, it's not enough to become a billionaire. Spielberg has a net worth of $3.7 billion. For comparison, other directors arguably of his stature include Quentin Tarantino ($120 million), Martin Scorsese ($100 million), Stanley Kubrick ($20 million), David Fincher ($65 million), Christopher Nolan ($200 million), Robert Zemeckis ($60 million), and Ridley Scott ($400 million) and do not have anywhere near as high a net worth as does Spielberg. While Spielberg has given us (the world) Jaws, E.T., Indiana Jones, and Jurassic Park among other things, just how the heck did he amass so much more wealth than his contemporaries? It's an interesting story, that's for sure.

Steven Spielberg and George Lucas have a legendary friendship that has included a lot of practical joke style bets and rivalries over the years. I am an alumna of the University of Southern California (Fight On Trojans!) and one long-standing story about the film school there having a building donated by Spielberg (who attended Cal State Long Beach, btw), was because he lost a bet to USC alumnus George Lucas. It's true! Back in the late 1970s, Lucas was in early production of what would become Star Wars. Lucas was pretty convinced back then that his space cowboy opus was going to be a box office bomb. At the same time, Spielberg was working on Close Encounters of the Third Kind. Lucas was feeling a bit desperate about the chances of Star Wars being a hit and he said to Spielberg: 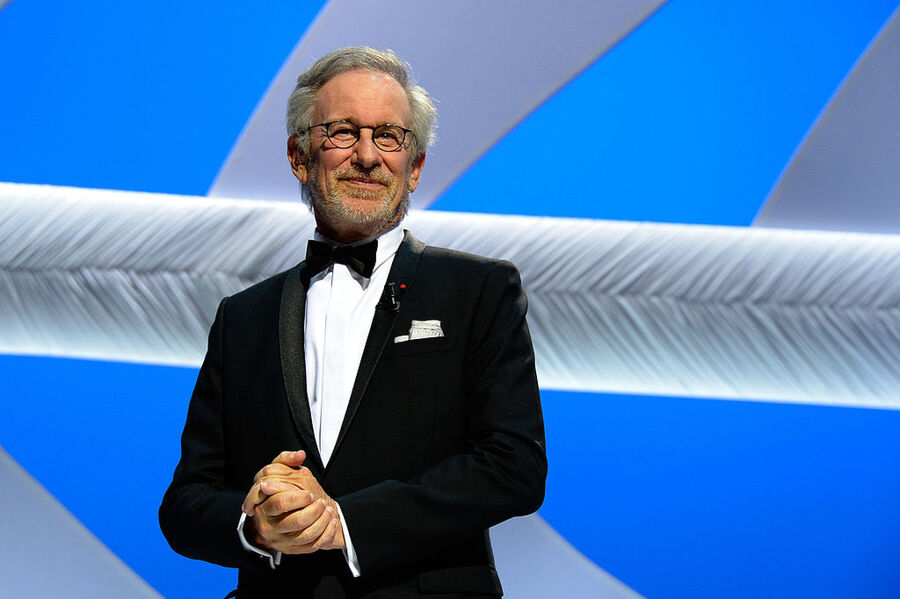 Both films were hits, but Star Wars out-earned Close Encounters. There was also another aspect to their bet that whoever lost the bet had to donate a building to the others' alma mater. Spielberg tried to get into USC two or three times according to folklore and was denied. But he lost the bet and he donated a building to USC's School of Cinematic Arts.

Star Wars went on to eventually earn billions. In the process, Steven made (and still makes to this day) a small fortune from a movie he had nothing to do with, at all.

The other deal Spielberg did that has contributed heavily to his multi-billion dollar net worth dates back to the early 1990s. Back then, Universal was part of MCA and the studio was, to put it mildly, struggling. Then Jurassic Park came out. Universal's parent company was cash strapped and failing fast. The dinosaur movie was an enormous hit. So were the sequels in 1997, 2001, and 2015. In fact, "Jurassic World" is the seventh highest-grossing movie of all time. The fourth movie in the series has brought in an astounding $1.7 billion worldwide. The fifth movie in the series, Jurassic World: Fallen Kingdom, was released in 2018 and has earned $1.3 billion worldwide. The sixth movie in the franchise, Jurassic World: Dominion is set for release in June 2021.

For the past 27 years, Universal has been printing money on the back of the Jurassic Park movies. But it could have gone another way. Back in the late 80s, MCA/Universal was struggling. Spielberg was already a major player and Universal's biggest name brand producer. But Steve Ross, who was running Time Warner at the time, wanted Spielberg to be on the Warner Brothers lot. He launched a campaign to lure the E.T. director from Universal. Time Warner had the cash to do it and Ross liked to throw it around. MCA head Sid Sheinberg, who was one of the people to first champion Spielberg as a director and producer, was not about to lose his biggest star. Being cash strapped at the time, Sheinberg couldn't compete with the cold hard cash Warner Brothers was offering Spielberg, so he did what he could and threw a theme park clause into Spielberg's contract. Spielberg would serve as a creative consultant on any theme park attractions related to his films and any film he directed would stay at Universal.

The theme park consulting perk paid Spielberg 2% of all park ticket revenue as well as a portion of park concession revenue in perpetuity. Spielberg's annual payout exceeds $50 million. That number will keep growing unless he agrees to a buyout. The clause allowed Spielberg a chance to exit the deal in June 2017 and collect a one-time payment equal to the value of the contract. That would have been worth about $535 million in mid-2017. Spielberg elected to stay in the deal and that means he could ultimately see a payout of $1 billion or more for his theme park clause. By 2017, Comcast was the parent company of Universal. Comcast and Spielberg agreed to a new deal in which Comcast took an ownership interest in his film studio, Amblin Partners in a deal that could ultimately pay over $1 billion.

To boil it down, Spielberg's multi-billion net worth is thanks to two chances he took. He and Lucas could not have predicted the success of their respective films. A theme park clause was novel at the time it was written into Spielberg's contract. It could have ended up not worth much, but it did and thanks in part to that, Spielberg has a net worth of $3.7 billion.