How The Lees Became The Fifth-Richest Family In Asia

By Amy Lamare on December 27, 2020 in Articles › Billionaire News

We're running down the richest families in Asia to round out 2020. Today, we're taking a look at the fifth-richest family in Asia: the Lee family. Their combined $26.6 billion net worth is derived from Samsung, which was started in 1938 by Lee Byung-chull as a trading company that exported fruit, vegetables, and fish. Today, Samsung Electronics (founded in 1969) is the world's largest maker of memory chips and smartphones and a leading manufacturer of televisions and other electronic devices. Samsung is the eighth-most valuable brand in the world.

Lee Byung-chull was the son of a wealthy family. He established Samsung Trading Co. as a trucking business on March 1, 1938. Samsung means "Three Stars." Three represents something "big, numerous and powerful" while "stars" means everlasting or eternal, like stars in the sky. By 1945, Samsung was transporting goods throughout Korea and to other countries. In 1947, the company established its headquarters in Seoul. When the Korean War started in 1950, it was one of the 10 largest trading companies. When Seoul was conquered by the North Korean army, Lee relocated his business to Busan. The massive amount of U.S. military and equipment in Busan over that time period was very beneficial to Lee's trucking company. Over the first three decades of Samsung, the company diversified into food processing, textiles, securities, insurance and retail. 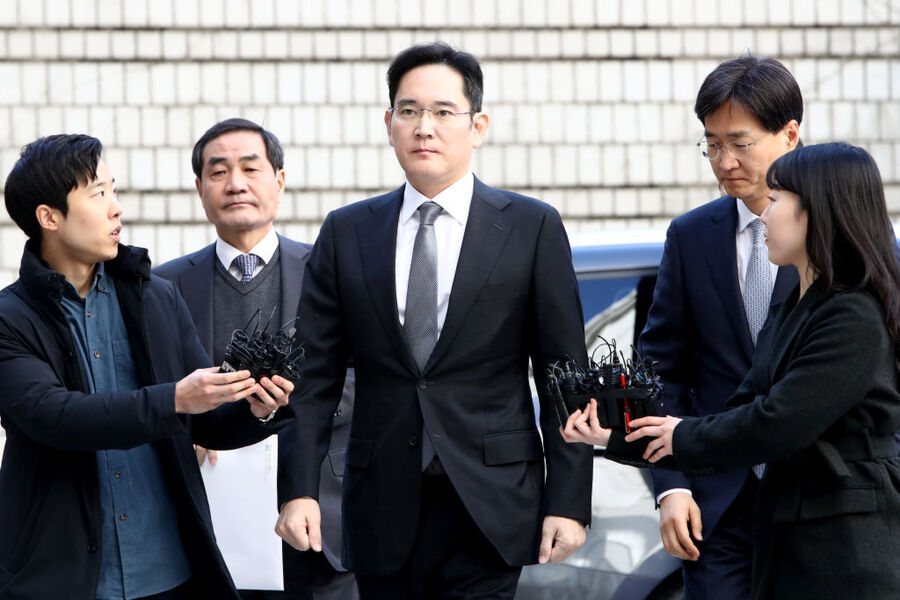 Samsung got into the electronics industry in 1969. Its first product was a black and white television. In 1980, Samsung started producing switchboards and eventually that facility was turned into the telephone and fax manufacturing and later mobile phone manufacturing center. Samsung has made more than 800 million mobile phones to date.

Lee Byung-chull died in 1987 and his grandson Lee Kun-hee took over. He decided to focus on cutting-edge technology in the 90s, which grew Samsung Electronics into the world's largest flat screen and semiconductor producer. In addition to his work at Samsung, he also sits on the International Olympic Committee and was the driving force behind bringing the 2018 Olympics to South Korea. He was involved in the Samsung "Slush Fund Scandal" in 2008 and resigned. He returned to the position of CEO in 2010. He inherited the company from his grandfather, who founded Samsung Group and has placed his children and their spouses in positions of power all over the company, making Samsung the largest chaebol in South Korea. A chaebol is the dynastic control of a family company.

Samsung Electronics became the world's largest mobile phone maker overtaking Nokia, which had been the market leader since 1998.

Lee Kun-hee had a heart attack in 2014 and his son Lee Jay-yong was the de facto head of the company from that time onward. Lee Kun-Hee died in October 2020.

Today, Lee Jay-yong is the head of the Samsung Group. Lee, you may remember was arrested a few years ago on corruption charges. In August 2017, Lee Jay-yong was found guilty of offering bribes to former South Korean President Park Guen-hye as well as to Park's close friend Choi Soon-sil in exchange for government favors for Samsung. Samsung donated nearly $70 million to two charities controlled by Choi Soon-sil. The company also transferred millions to a German company of Choi's that financed her daughter's equestrian training and her niece's winter sports center. The resulting outrage led to Park's removal as President. Lee was also found guilty of embezzling money from Samsung, hiding assets overseas, concealing profit from criminal activities, and perjury. Lee was freed from prison in February 2018. He was given an alternate 2 ½ year suspended jail sentence.

Lee returned to the helm of Samsung when he was released from prison and announced that he intends to end the dynastic control of Samsung. He's also decided that employees can unionize, bargain collectively, and have peaceful assemblies. This means Samsung will be run by professional managers who are hired for their experience and talent rather than being a member of the Lee family. The 51-year-old has clarified that he will not be passing leadership of the company along to his daughter and son who are still in their teens and early 20s.

Unfortunately, Lee Jay-yong is still battling it out in court during his legal dispute with South Korean prosecutors. The current case is focused on whether Lee and Samsung used illegal means to help him take control of the company founded by his grandfather. Lee could be sent back to jail. Overall, Samsung hasn't been affected by the years-long legal proceedings that have been swirling around Lee. If he goes back to jail, however, it will be more difficult for Samsung executives to make major decisions, such as mergers and acquisitions or whether to act or not on large investments.