How The Lauder Family Became One Of The Wealthiest Families On The Planet With A Combined Net Worth Of $24.3 Billion

By Amy Lamare on November 25, 2018 in Articles › Billionaire News

We live in an era of truly incredible wealth and vast inequality between the richest billionaires and every day middle class people. The 25 richest families in the world have a combined net worth of $1.1 trillion. The Lauder family is the 24th wealthiest family in the world with a combined $24.3 billion net worth. Estee Lauder started the family business in 1947 when she received her first major order for $800 worth of skincare products from Saks Fifth Avenue. Today, the family business includes 30 different brands of makeup – including Clinique and MAC – and generates $12 billion in revenue.

"I didn't get here by dreaming or thinking about it. I got here by doing it."-Estee Lauder

Estee Lauder was born Josephine Esther Mentzer in Queens, New York in 1908. Her parents were Jewish immigrants from Hungary and Czechoslovakia and owned a hardware store, above which the family lived. As a child, Lauder was embarrassed by her parents' old country ways and heavily accented English. She dreamed of being 100% American. She helped out in her father's hardware store, where she learned the business of retail and how to be an entrepreneur at a young age. However, she really wanted to be an actress. 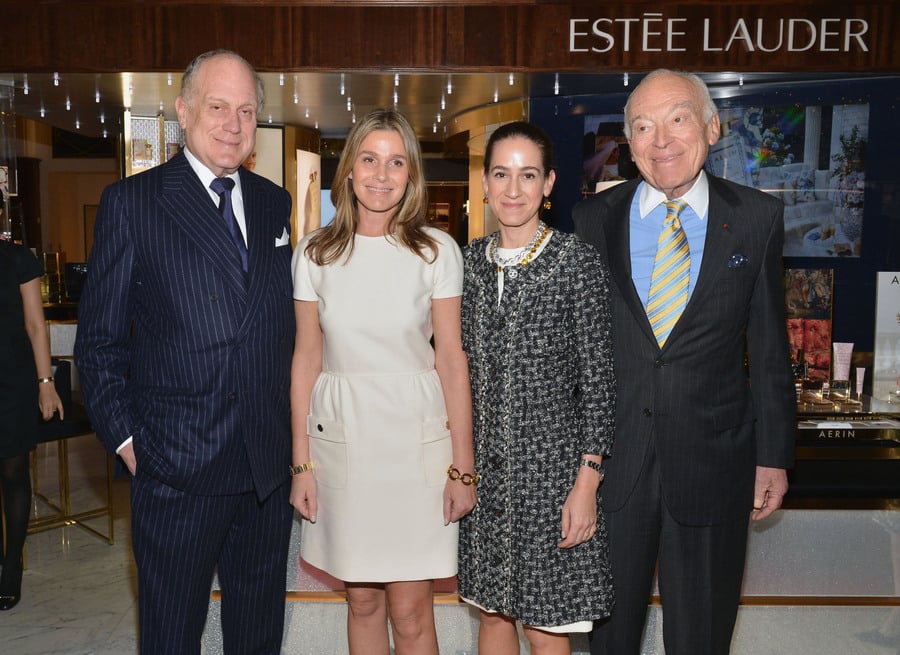 After World War I broke out, her uncle John Schotz came to live with her family. He was a chemist who made skin care products. He set up a makeshift laboratory in the stable behind Estee's house and began mixing face creams with his niece by his side. She watched and learned. Suddenly, she no longer wanted to be an actress, she wanted to be a scientist. She took her uncle's products to her high school and gave classmates makeovers to demonstrate the quality of her uncle's products.

Before she became the glamorous skin care specialist she was envisioning herself as, she met and married Joseph Lauter, a successful textile salesman. The newlyweds moved to Manhattan and changed the spelling of their name to the original Austrian spelling of Lauder. During the early years of her marriage and even after her first child Leonard was born in 1933, Estee continued to improve and refine her uncle's face creams. She gave free demonstrations at salons, hotels, the subway – anywhere she could draw a captive audience. She also began going to the homes of her clients where she would do makeovers on their friends and sell even more.

Estee moved to Miami Beach after her divorce. She sold her products to affluent women on vacation. She also had a number of affairs with wealthy men she hoped could help her expand her business. After three years of this, she realized she really missed her ex-husband. When her son got the mumps, Estee and Joseph reunited to care for him. A new spark of romance was born, and they remarried in 1942. As part of their new marriage, they agreed to try and make Estee's cosmetics company a success. She was in charge of marketing and product development.  He was in charge of finance and manufacturing.

The Lauders opened their first retail store in New York City in 1944. Estee gave birth to her son Ronald that December and returned to work nearly immediately. In 1946, she officially formed Estee Lauder Inc. During the day she sold her products. At night she created the creams and oils for her products. In what turned out to be a genius marketing move, Estee decided to sell her products exclusively at upscale department stores. She turned her focus to Saks Fifth Avenue. She talked them into placing a large order  – which sold out in two days. This success convinced her that she would compete with Revlon, Elizabeth Arden, and Helena Rubinestein – the cosmetics giants of the day.

By the early 1950s, the Estee Lauder line could be found in Neiman Marcus, Marshall Field's, I. Magnin, and Bonwit Teller. Her company was still tiny compared to the leaders in the cosmetics business. Estee wanted to change this, but no ad agency would take her business on. So, the Lauders put their entire $50,000 advertising budget into sample sizes of their products which were given away via gifts with purchases, charity giveaways, and direct mail. This brought in thousands of new customers.

In 1953, Estee introduced her first fragrance. It was called Youth Dew, a bath oil that also doubled as a perfume. At $8.50, it was an affordable luxury for most woman. Sales took off and within a couple of years, Youth Dew made up 80% of Estee Lauder's sales and took the small startup and turned it into a multi-million dollar business.

Estee continued to expand her product line throughout the 1960s. She also added the fashion-oriented, allergy-tested Clinique line. She also expanded into Europe with Paris' Galleries Lafayette and Harrod's of London carrying her products. By the mid-1970s, Lauder's products were sold in more than 70 countries across the globe.

Estee Lauder's cosmetics empire continued to grow through the 1980s and 1990s, becoming the third-largest cosmetics company in the U.S. By 1999, products in the Estee Lauder line made up almost 50% of all retail beauty products sold in the U.S. cosmetics companies that fall under the Estee Lauder banner, including, but are not limited to, Becca, Bobbi Brown, Clinique, Glamglow, La Mer, Mac, Origins, Prescriptives, Smashbox, Too Faced, and Tom Ford Beauty.

Today, Estee Lauder's granddaughter Aerin Lauder, 48, is the image and style director of Estee Lauder, the cosmetics empire founded by her grandmother. She is in line to inherit the family fortune alongside her 45-year-old sister Jane, who is the global brand director for Clinique.

Estee Lauder built her global cosmetics empire on the motto, "There are no homely women, only careless women." She set out to convince those "careless women" that they could be beautiful with a little help from her products. She succeeded, and with her oversized ambition and laser-like focus, took on the established cosmetics industry giants – and won. She dreamed of being 100% American and from a wealthy background as a child of immigrants. What she did was ensure her heirs had the life and background she always dreamed about.