How The Kwoks Became The Second-Richest Family In Asia

By Amy Lamare on December 22, 2020 in Articles › Billionaire News

We're running down the richest families in Asia, to round out 2020. Today, we're taking a look at the second richest family in Asia: the Kwok family. Their combined $33 billion net worth is derived from Sun Hung Kai Properties, the second-largest real estate company in the world. Sun Hung Kai Properties is one of the biggest real estate developers and landlords in Hong Kong. The family also comes with a fair bit of drama to add some salaciousness to their tale of wealth. Seriously though, the Kwok family drama is like a soap opera or telenovela – they've got billionaires, mistresses, feuding siblings, arrests, a kidnapping, allegations of corruption, and suspected mental illness.

Kwok Tak-seng founded Sun Hung Kai Properties in 1963. He was born in Zhongshan and moved to Hong Kong after World War II. He made his real estate firm a massive success by getting into every sector of the property business from residential to commercial to hotels to industrial developments. He was aided in part by the three-decade long rise in the price of homes in Hong Kong. Basically, Kwok and Sun Hung Kai properties were in the right place at the right time. 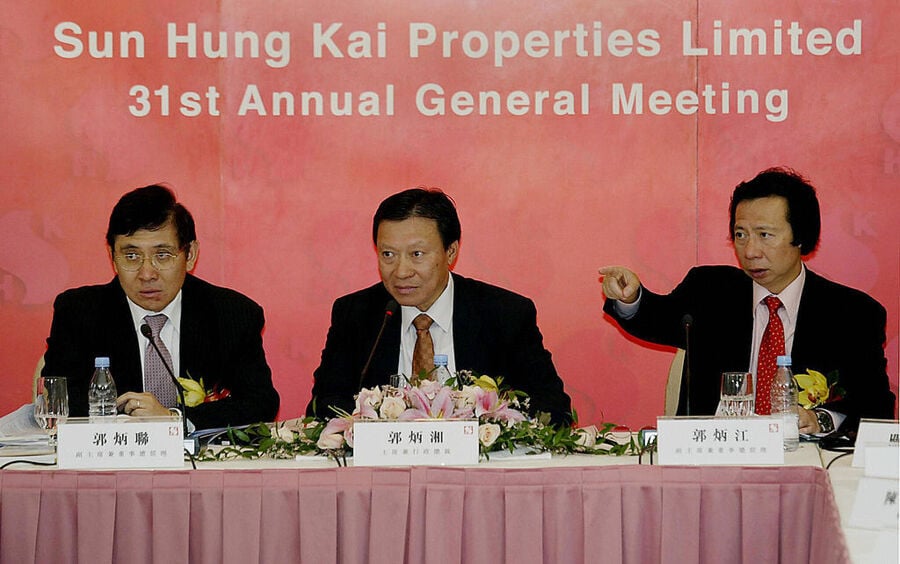 In Hong Kong, just a handful of families control all of the real estate, shopping centers, and utilities. The Kwok family is one of those families. A college graduate makes a starting salary of $25,000 in Hong Kong. The average rent for a two-bedroom apartment in a building owned by the Kwok's is going to run you more than $4,000 a month. Hong Kong's real estate is the most expensive in the world in terms of price per square foot. Sun Hung Kai Properties is the largest landowner in Hong Kong and one of the main reasons the cost of living in Hong Kong has skyrocketed over the last few decades.

Kwok Tak-seng had three sons, Walter, Thomas, and Raymond. He passed away on October 30, 1990, at the age of 79. His real estate empire was passed down to his oldest son, Walter.

Walter was kidnapped by notorious underworld gangster Cheung Tze-keung in September 1997. Walter was beaten, stripped down to his underwear, and kept blindfolded in a wooden box. Cheung demanded $110 million from the Kwok family for Walter's return. As legend has it, either Walter's mother Kwong Siu-hing, or his wife Wendy reportedly had a secret meeting with the kidnapper. The ransom was paid via 20 large bags filled with cash seven days after Walter was kidnapped. Cheung was captured on mainland China and executed by firing squad in 1998. It is said that Walter was never the same after the kidnapping. Officially, he was diagnosed as bipolar.

The Walter drama doesn't stop there. Reportedly, the family was furious with him because he was carrying on an affair behind his wife's back. Not only was he cheating, but he also kept trying to get his mistress a seat on the board of directors of Sun Hung Kai Properties. His mistress was an attorney he had known for more than 35 years – dating back to before he married his wife Wendy. They dated when Walter was young but broke up because his father didn't approve of their relationship. Their affair allegedly began after his kidnapping.

So let's recap: kidnapping, mental illness, infidelity, and a boardroom coup. The Kwok family feud was public and incredibly nasty. Walter finally filed a defamation lawsuit against his brothers due to the allegations they made against him in letters sent not just to their mother, but also to the board of directors of Sun Hung Kai Properties. Reportedly, Thomas and Raymond said Walter's bipolar disorder made him unfit for the job as chairman and CEO of the family business. Walter was eventually forced out of the family trust. His mom took over as chairman. Eventually, Thomas and Raymond became co-chairmen.

Things could finally return to normal for the Kwok family. Except, apparently drama and hijinks are what's normal for this family. In March 2012, Thomas and Raymond Kwok were arrested on bribery charges by the Independent Commission Against Corruption. Between 2005 and 2007, Thomas paid $3.7 million to Rafael Hui, Hong Kong's Chief Secretary. That role is the second most powerful official. Thomas claimed the payments were for a consulting fee but if that was true, why pay him in cash? Thomas Kwok was sentenced to five years in prison. Reportedly, Walter gave the police the info that led to Thomas' arrest.

Thomas Kwok was convicted of "conspiracy to commit misconduct in public office" in December 2014. Raymond Kwok was cleared of all charges. Thomas was sentenced to five years in prison and a $500,000 fine. He immediately resigned from Sun Hung Kai Properties as chairman, managing director, and executive director.

Walter Kwok died on October 20, 2018, at 68, two months after suffering a stroke. Walter's son Geoffrey Kwok was named a non-executive director of Sun Hung Kai Properties in 2018. Thomas Kwok rejoined the family business in 2020 after he completed his prison term.