By Amy Lamare on November 2, 2018 in Articles › Billionaire News

We live in an era of truly incredible wealth and vast inequality between the richest billionaires and every day middle class people. The 25 richest families in the world have a combined net worth of $1.1 trillion. The Kwok family is the 13thwealthiest family in the world with a combined $34 billion net worth.

The Kwok family's wealth is derived from Sun Hung Kai Properties, the second-largest real estate company in the world, behind the Simon Property Group which owns the majority of America's malls. When you combine the Kwok family's wealth together, they are easily one of the wealthiest families in the world. But how they made their wealth (real estate during the decades of boom time in Hong Kong) isn't nearly as interesting as the family drama.

Hong Kong's Kwok family controls Sun Hung Kai Properties, one of the city's biggest landlords and real estate developers. Walter Kwok recently made the news when he passed away at the age of 68. This family has all the juicy ingredients for a soap opera – a dynasty of billionaires, a kidnapping, feuding siblings, a mistress, charges of mental illness, a boardroom coup, dramatic arrests, allegations of corruption reaching the highest levels of government, and a family torn apart. 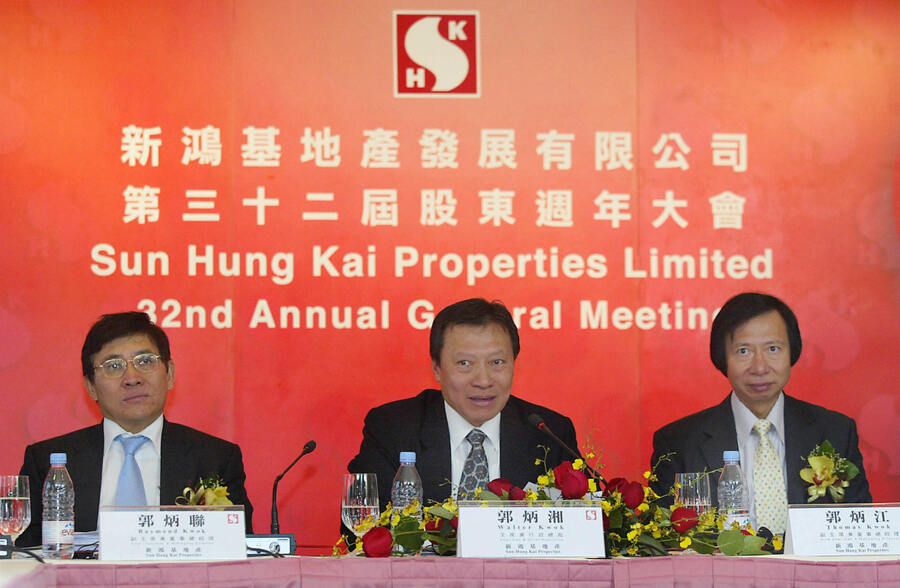 Sun Hung Kai Properties was founded in 1963 by family patriarch Kwok Tak-seng. The father of Walter, Thomas, and Raymond made his fortune by breaking into every single sector of the property business from residential to hotels to industrial development. He was born in Zhongshan in the Guangdong province of China and moved to Hong Kong after World War II. He benefitted from the three decade long surge in the price of homes in Hong Kong. Sun Hung Kai Properties was in the right place at the right time – during the biggest housing demand boom in the history of Hong Kong. The company is known for its high end apartments.

Kwok Tak-seng died of a heart attack at the age of 79 on October 30, 1990. He left behind his wife and three sons. The reins of the Kwok empire passed to his oldest son Walter, who was made chairman and CEO of Sun Hung Kai Properties.

On September 30, 1997, Walter was kidnapped by Cheung Tze-keung. Cheung was nicknamed "Big Spender" and was a prominent gangster in the Hong Kong underworld. He reportedly beat Walter, stripped him down to his underwear, and kept blindfolded and imprisoned inside a wooden container. "Big Spender" demanded that the Kwok family pay him a ransom of HK$600 million ($110 million US). It is believed that Walter's mother Kwong Siu-hing held a secret meeting with Big Spender.  The ransom was paid and delivered in 20 large carrier bags filled with 1,000 dollar notes. The money was transported via two Mercedes saloon cars, and the trade-off was made on a quiet side street seven days after Kwok's abduction. The kidnapper was later captured on mainland China and was executed in by firing squad 1998. The kidnapping took a major emotional and mental toll on Kwok and he was never the same again.

The family blamed Walter's mental state (he officially received a diagnosis of bipolar disorder), a long standing rumor is that the family was furious because Walter, who was married, had been conducting a long term affair and has tried to appoint his mistress to the board of Sun Hung Kai Properties. That woman was Ida Tong Kam-hing, an attorney in Hong Kong who was five years older than Walter. He had reportedly known her for more than 35 years, since before he married his wife Wendy. The comparisons to Prince Charles and Camilla Parker-Bowles were made and the Hong Kong press started calling Ida "HK's Camilla." Reportedly, Walter broke off his relationship with Ida as a young man because his father disapproved of her. He took up his affair with her after his kidnapping ordeal.

During the nasty, public, family battle and boardroom coup, Walter filed a defamation suit against his brothers on the basis of allegations he said they made against him in a series of letters sent to their mother and the directors of Sun Hung Kai Properties. According to the documents in the lawsuit, the letters talked about Walter's bipolar disorder and called him a liar unfit for the position of chairman and CEO.

After a three month battle, Walter was forced out of the family trust and given a non-executive director post. His mother took over the chairmanship for a time and eventually Thomas and Raymond became joint chairmen.

Then, in March 2012, Thomas and Raymond Kwok were arrested by the Independent Commission Against Corruption on bribery charges. The Kwok brothers were arrested as part of an extensive police corruption investigation involving Hong Kong's business and political elite. Between 2005 and 2007, Thomas paid approximately $3.7 million to Rafael Hui. That also happens to be the exact period when Mr. Hui was serving as Hong Kong's Chief Secretary, a job that paid a salary of $220,000 per year.

During the two years Rafael was Hong Kong's second most powerful official earning $220k per year, he was also receiving $1.9 million in annual cash payments from Thomas Kwok. Thomas has claimed that the payments were nothing more than a simple consulting fee but that excuse was put in question because the payments were made in cash using a series of go-betweens. If it was a simple consulting fee, why not put it on the books?

Thomas Kwok was sentenced to 5 years in prison. Raymond Kwok was acquitted. Allegedly, the information that led to Thomas and Raymond's arrest was provided by Walter.

Now let's be clear, in Hong Kong, just a few families control essentially all of the real estate, shopping centers, and utilities. One of those families is the Kwoks. Starting salary for a college grad in Hong Kong is $25,000. An average two bedroom apartment in one of the Kwok-owned buildings can easily rent for more than $4000 per month. Hong Kong has the most expensive real estate in the world in terms of price per square. The Kwok brothers' company is the largest land owner in Hong Kong and is arguably the main reasons cost of living has sky rocketed over the last several decades.