How The Dumas Family Became One Of The Wealthiest Families On The Planet, With A Combined Net Worth of $49.2 Billion

By Amy Lamare on November 30, 2018 in Articles › Billionaire News

We live in an era of truly incredible wealth and vast inequality between the richest billionaires and every day middle class people. The 25 richest families in the world have a combined net worth of $1.1 trillion. The Dumas family is the 5th wealthiest family in the world with a combined $49.2 billion net worth. Thierry Hermes started the family business in 1837. Long before the famous scarves and Birkin bags, Hermes was a harness maker who provided gear for the houses of royals throughout Europe. His grandson, Emile-Maurice modernized the family business. He brought in his friends Louis Renault and Ettore Bugatti to make trunks for cars. Emile-Maurice also diversified the company into furniture, belts, and couture. But it is Jean-Louise Dumas, a descendant of Thierry Hermes, that is credited with turning Hermes into a global giant in luxury fashion.

Emile-Maurice had three daughters. All married well and created three new branches of the family: Guerrand, Puech, and Dumas. This is why no one in the family today carries the Hermes name. In the late 1930s, Thierry's son in law Robert Dumas suggested the company expand its racing silks into scarves and neckties—he designed a few of them himself as samples. That took off. In the 1950s, Robert Dumas took over the company from Emile-Maurice and ran it for three decades. 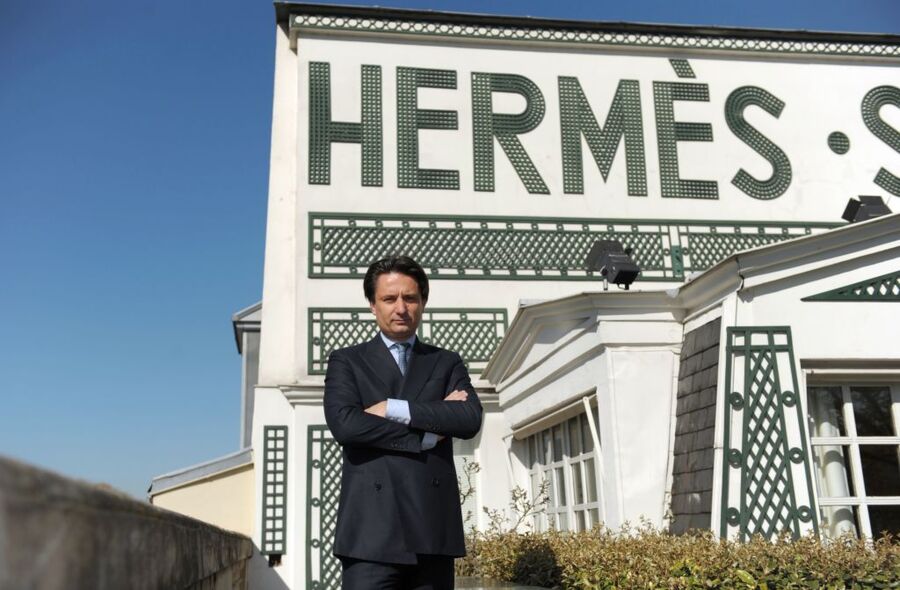 One of Dumas' five sons,  Jean-Louis, was named CEO and creative director of Hermes in 1978. He was 40-years-old. Jean-Louis is credited with turning the company into the luxury powerhouse it is today. With the help of his cousins Patrick Guerrand and Bertrand Puech he shook up the nearly 150-year-old family business. He relaunched the Kelly handbag in a series of vibrant colors. He designed a bag for It Girl Jane Birkin that was made to her specifications and named after her. He introduced hip ad campaigns and opened a slew of retail stores. He went on an acquisitions spree, adding Puiforcat silversmiths, Saint Louis crystal, and John Lobb shoes to the family company's portfolio.

However, perhaps the most important contribution Jean-Louis made to Hermes came after witnessing Bernard Arnault's long boardroom battle with the Vuitton family in the late 1980s for control of LVMH. Dumas put two things into action that would protect Hermes from a takeover battle from a non-family member. In 1989, he created a company called Emile Hermes SARL to represent the family shareholders. This company is in charge of hiring management and setting the strategy for the company. Then, in 1993, Dumas put 4% of Hermes on the French stock exchange; giving younger generations a way to liquidate while allowing the family to keep control. The publicly traded shares of Hermes have no management power. The money made from the sale of shares allowed Jean-Louis Dumas to add men's ready-to-wear attire, tableware and furniture to the company's offerings. Between 1989 and 2006 sales grew fourfold, to $1.9 billion.

Bernard Arnault noticed the growth. Hermes fit right into his growing portfolio of luxury goods companies in the same way that Dior and Fendi did. He began buying shares in 2002. In 2010, the same year that Jean-Louis Dumas died, he revealed that he owned 17% of Hermes. A takeover seemed inevitable. The Hermes family was expected to take the money and cede control of the company. Instead, they circled their wagons. In 2011 more than 50 descendants of Thierry Hermes pooled their shares into what was basically a $16 billion co-op called H51. The contributions represented 50.2% of all of the company's shares. The contributors agreed not to sell any shares for the next 20 years. Two other major shareholders, now 82-year-old Bertrand Puech and now 75-year-old Nicolas Puech kept their shares out of H51 but agreed to give the family the right of first refusal if they ever decided to sell their shares.

The unified front of the Hermes family members has been profitable for the company. The two decade ban on selling shares allows the company to make long term decisions as if it was a private company.

Today, the fifth and sixth generation descendants of Thierry Hermes run the company. Axel Dumas, sixth-generation descendant of the Hermes dynasty, has been CEO since early 2014.  He is the son of Olivier, the eldest of the five Dumas brothers. Jean-Louis was his uncle.

Hermes has flourished, due in large part to the enduring demand for its leather goods. The Kelly hand bag starts at $8,450. The Birkin bag starts at $8,850. Right now, on the designer resale site TheRealReal.com, pre-owned Birkin bags are selling for $13,000-$20,000 on average. Despite the substantial price tag, Hermes bags are coveted. They are also collected. Victoria Beckham is rumored to have a collection of more than 100 Birkin bags worth more than $2 million.