How The Ambanis Became The Richest Family In Asia

By Amy Lamare on December 23, 2020 in Articles › Billionaire News

The list of the wealthiest families in Asia is out and the Ambani family is the richest of them all. Mukesh and Anil, sons of Dhirubhai Ambani, took the business their father started in 1957 – Reliance Industries – and built on it in a huge way. The Ambani family has a truly staggering net worth of $76 billion. That's also Mukesh Ambani's personal net worth. The last few years have been interesting for the Ambani brothers, that's for sure. Due to a number of bad business moves, Anil Ambani has a net worth of $0. On the other hand, Mukesh owns the largest oil refining complex in the world, is bringing affordable internet to India's rural areas, and lives in a 27-story mansion in Mumbai that is believed to be the most expensive private residence in the world. What's even more astounding about Mukesh's net worth is that just seven years ago, when we first wrote about his rise to become the richest man in India, he was worth "just" $18 billion. Two years ago, the Ambani family (Anil hadn't yet lost all of his money) was worth $43.4 billion.

Mukesh and Anil Ambani are the children of Dhirubhai Ambani, who founded Reliance Industries the same year Mukesh was born. The patriarch died in 2002 without a will and the two brothers began to fight bitterly over the family empire. It was basically a war between the brothers for several years until their mother, Kokilaben, stepped in and brokered a deal. Mukesh got Reliance's oil, textile, and refining businesses. Anil got Reliance's telecommunications, entertainment, and asset management, divisions. Peace was restored in the Ambani family. 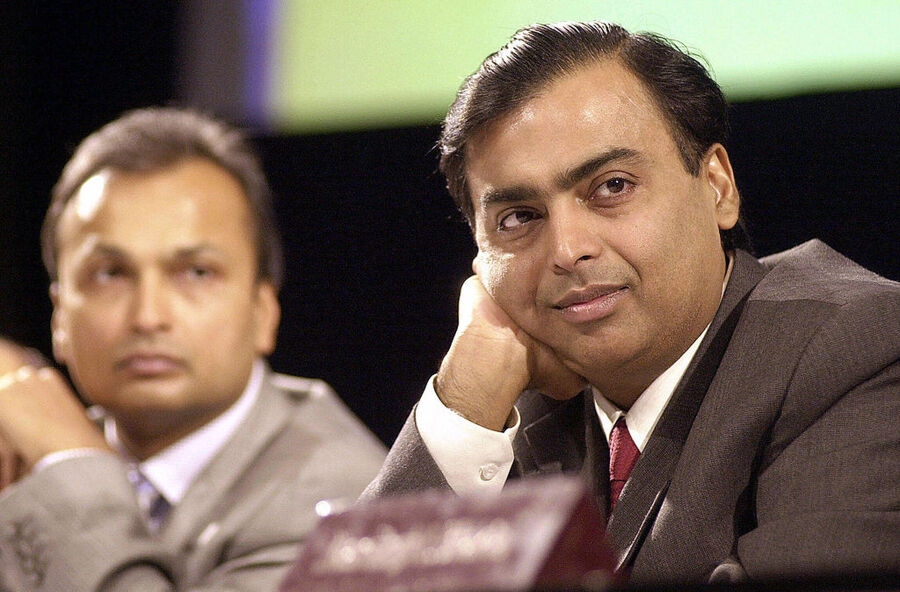 Mukesh has built his Reliance divisions into huge empires. He's taken the oil and energy sectors he inherited and grown past that. He opened 700 grocery stores that serve tens of millions of India's citizens. He spent $35 billion to start Jio Infocomm and bring the first 4G wireless network to India. Even more importantly, Jio brought broadband into the small villages and countryside where reliable internet was previously nearly nonexistent. Even villages with no paved roads or indoor plumbing can get Jio's 4G network. It costs just $2.10 a month. Mukesh brought the internet to 1.3 billion people. Mukesh has not let his oil, gas, petrochemical, and textile manufacturing businesses suffer while branching out into new areas.

Anil, on the other hand, has faced a run of very bad luck in recent years. While Mukesh was building and expanding his businesses, Anil was running his into the ground. Anil built up so much debt that he had to start selling off his assets to quell the worries of his investors. He took on debt to finance growing his company. His debt ratio led India's banks to have one of the worst bad loan ratios in the world. At its peak, Anil's debt was $210 billion. The worst performer in his portfolio is Reliance Naval and Engineering. He bought the company in 2015, believing that the defense industry would be the next one to have significant growth. That didn't happen. Reliance Power, Ltd. has been failing for more than a decade. Reliance Capital hasn't fared well either. However, that wasn't even Anil's biggest problem: that would be his brother.

While Mukesh has the oil end of Reliance as his flagship business, Anil had Reliance Communications. That was the real cash cow of his portfolio. At least until Mukesh started Jio Infocomm which created a price war with Reliance Communications. Anil had to sell off its fiber-optic network when it couldn't compete. Mukesh bought it through Jio. Anil sold off most of his assets to focus on a new real estate venture. His net worth went from several billion a few years ago to $0 today. Oh, and he almost went to jail for not paying his debts. Big brother Mukesh stepped in and paid off an $80 million debt to keep his little brother out of prison.

Now, back to Mukesh's 27-story mansion. The Ambani home is named after the mythical island Antilia in the Atlantic Ocean. The 400,000-square-foot home reportedly cost $1 billion to build. Mukesh, his wife, and their three grown children live there. The roof has a landing pad for three helicopters. Six floors are a parking garage for 168 cars. The home is staffed by more than 600 full-time employees.

A fun fact about the extent Ambani family's wealth: Beyonce and Chris Martin have given private performances at Ambani family weddings. Must be nice!