How The Ambani Family Became One Of The Wealthiest Families On The Planet With A Combined Net Worth of $43.4 Billion

By Amy Lamare on October 2, 2018 in Articles › Billionaire News

We live in an era of truly incredible wealth and vast inequality between the richest billionaires and every day middle class people. The 25 richest families in the world have a combined net worth of $1.1 trillion. The Ambani family is the 7th wealthiest family in the world with a combined $43.4 billion net worth. Mukesh Ambani is the richest person in India and he has certainly taken the reins his father left him and built one of the world's largest fortunes. Dhirubhai Ambani, father to Mukesh and Anil, worked at an oil company, gas station, and as a laborer in Yemen early in his career. He returned to India and founded Reliance Industries in 1957 as a spice importer and yarn firm. Today, Reliance Industries is one of the most profitable companies in India with interests in energy, petrochemicals, textiles, natural resources, retail, and telecommunications.

Mukesh Ambani is the eldest son of Dhirubhai and his wife Kokilaben Ambani. He was born in Yemen in 1957, the same year his father founded the company he now runs. Growing up, the Ambani family of six lived in a two bedroom apartment in a poor neighborhood that was what Americans would call a tenement. Once Reliance began to thrive, Dhirubhai moved his family to one of Mumbai's nicest neighborhoods. 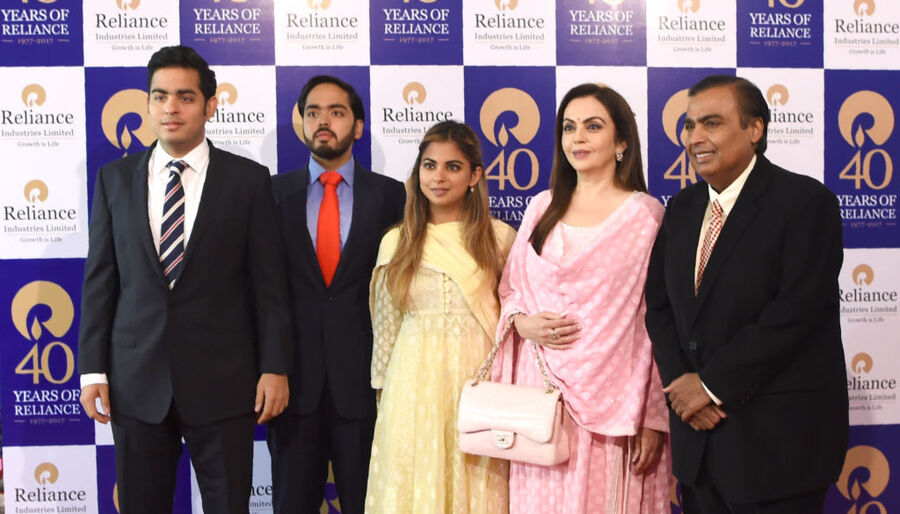 Mukesh attended the University of Mumbai for his BE in Chemical Engineering. He enrolled at Stanford for his MBA but dropped out in 1980 due to developments back at home. The PFY—that's polyester/filament/yarn industry in India had been opened up to the private sector. Dhirubhai applied for and was awarded the government's PFY license and asked his son to return home to help the company build a new polyester plant.

Mukesh was dispatched to a remote village in India during the early and mid 1980s. He lived in a trailer. He learned leadership skills. He realized it was important to listen to his employees and to know what was going on at every level of the business. Over the years, Reliance moved into petrochemicals, petroleum refining, telecommunications, entertainment, asset management and oil and gas exploration and became one of the largest publicly traded companies in India.

When Dhirubhai died without a will in 2002, a war broke out between Mukesh and his brother Anil. The fight would last several years until their mother intervened and encouraged a compromise. Anil got control of all of Reliance's telecommunications, asset management and entertainment interests. Mukesh was given the company's oil, textile and refining assets.

Under Mukesh, Reliance has grown beyond the oil and energy industries. The company opened a chain of about 700 grocery stores that sell food to tens of millions of India's citizens.

Mukesh Ambani created the company Jio Infocomm and spent $35 billion of Reliance's money to bring the first all 4G wireless network to India. Ambani has brought broadband to the villages and the countryside. Now a family in the Himalayan foothills who lives in a house built of mud and stone is able to order a refrigerator online. For someone in a village with no paved roads or indoor plumbing, Ambani's 4G network offers unlimited data for $2.10 a month.

This also gives 1.3 billion people access to global tech and ecommerce giants. This relatively simple act has upended the telecom industry in India and sent his competitors into a tailspin trying to keep up.

India has 390 million internet users, but that's only 28% of the population. For comparison, 88% of the United States is connected to the internet. The e-commerce market is expected to bring in $33 billion this year. That's three times what it was in 2015 but still less than 3% of the overall Indian retail market.

Even as Ambani steers his company into new arenas, he continues to nurture Reliance's dominance in its petrochemical, oil, gas and textile manufacturing businesses. In certain regions of India, Reliance's chain of grocery stores have inspired farmers to become more productive.

On the other hand, Mukesh definitely does not live like a pauper in the streets of Calcutta. The Ambani residence, which is named Antilia, is located on Mumbai's prestigious Altamount Road. Antilia is named after a mythical island in the Atlantic Ocean. The 550-foot, 27-story residential skyscraper reportedly cost $1 billion to build from the ground up. The 400,000 square foot home houses Mukesh, his wife, and their three children. The property is built on a 50,000 square foot plot in the southwest of Mumbai. The roof has landing space for three helicopters and six floors are reserved exclusively for 168 parking spaces. The house has a 50-seat movie theater, yoga studio, health club, spa, ballroom. Even though only six people live in the house, the building is staffed by more than 600 full-time employees

Ambani is a man who is proud of his Indian heritage, wants to lift his country out of poverty and does it all while running a multi-billion company.