When Scott Farquhar was 11 years old, he really really wanted a computer. The year was 1990 and he was the oldest of four kids in a working-class family in Sydney, Australia. The recession of the early 1990s meant it took a couple of years for his dream of a computer to come true. His dad found and bought an old Wang computer that was so old it couldn't run MS-DOS. Farquhar spent a year trying to get that old computer to play the games he wanted to play. He wouldn't be exposed to computers again until he got to college.

On the other side of Sydney, Mike Cannon-Brookes was getting settled in Australia after being born in the U.S., moving to Taiwan at six months old, Hong Kong at three years old, and then being sent to school in England. He bought his first computer with frequent flyer points he saved up flying back and forth between his family in Australia and school in England four times a year. His parents were fans of Apple and had Macs. He wanted a PC. In 1991, before the world wide web, Mike convinced his parents to install the internet at home.

In 1998, Farquhar and Cannon-Brookes landed at the University of New South Wales together. They were both 18 and studying in the same business information technology program. They met the very first day of college. They were both scholarship kids and bonded over their shared love of computers. 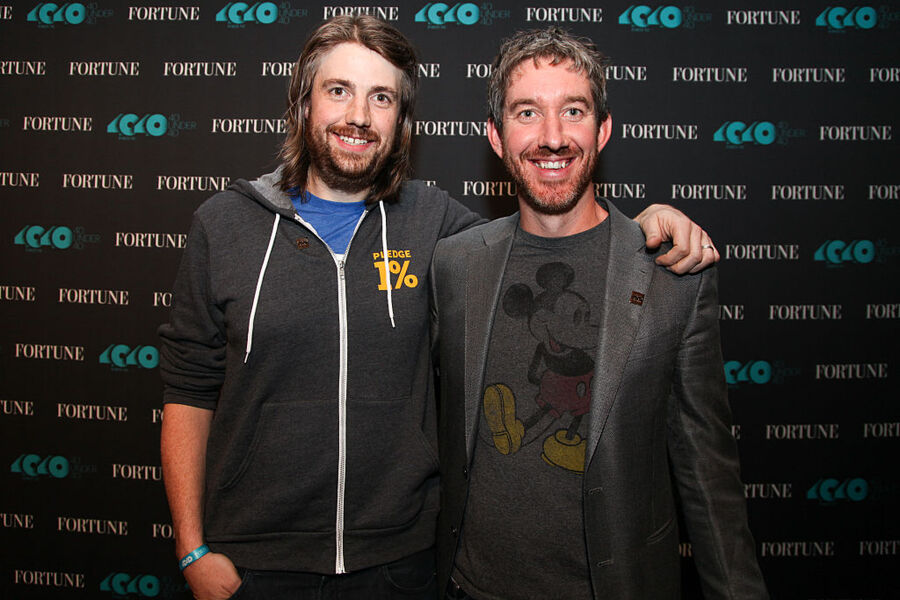 In June 2001, Cannon-Brookes sent Farquhar an email inviting him to co-found a company with him. He sent the email, which said: "Bored of studying, Atlassian is far more interesting," to a handful of classmates. Farquhar was the only person to say yes. Their original goal was to make $48,500, which was what accounting graduates made at the time.

Once Farquhar and Cannon-Brookes graduated from college, they founded Atlassian with $10,000 of credit card debt. The first two years they were in business they were in survival mode, only making $15,000 salary each. Their timing wasn't great. The dot-com bubble had just crashed. Farquhar took a short consulting gig in Amsterdam in order to afford the time Cannon-Brookes needed to write code. Their first employees were mostly their college classmates. After all, they knew they were smart. The company has been cash-flow positive from the outset. It took no outside investment for the first eight years. Atlassian has never had funding but it has had two big investments. They sold 20% of Atlassian to Accel Partners for $60 million in 2010. They've also given equity to staff. In 2014, T. Price Rowe and Dragoneer Investment Capital purchased about 6% of the company from Accel and a few employees. That deal valued Atlassian at $3.3 billion.

The Atlassian offices feature the usual perks of a tech startup with catered meals and other perks. Farquhar's strategy is to try and make it so his employees never want to work anywhere else. And if they leave Atlassian—he wants them to regret it.

Atlassian develops products for software development, content management, and project management. In 2019 they posted a revenue of $1.21 billion and the company has more than 3,600 employees. Scott Farquhar and Mike Cannon-Brookes were named Ernst & Young's Entrepreneurs of the Year in Australia in 2006. Atlassian has been profitable for every single quarter since it was founded. Atlassian's customers include Audi, Virgin Media, and NASA.

Outside of work, Farquhar and Cannon-Brookes have a lot in common. They are both 41. They were the best man at each other's weddings. Farquhar's wife Kim Jackson is an investment banker. Cannon-Brookes' wife Annie Todd is a fashion designer. Farquhar and Jackson have three kids. Cannon-Brookes and Todd have four kids. In 2018, Cannon-Brookes bought Fairwater, the most expensive house in Australia for about $100 million. The house is right next door to Farquhar's $75 million house called Elaine.

From the very start of their business, they wanted to do more than just create software. So they pledged 1% of equity to charity back when the company was brand new. That 1% stake is worth tens of millions today. The Atlassian Foundation also gets 1% of profit and 1% of employee time as well as donates software licenses to non-profits. Atlassian is one of the biggest donors to Room to Read, a U.S.-based charity that builds schools and libraries in developing nations.

In nine years, Farquhar and Cannon-Brookes will be 50. At this point in their lives, they've known each other longer (22 years) than they lived before they met (18 years). In a 2014 interview, Farquhar said he couldn't imagine reaching 50 or what he'd be like at half a century old. What he did know is that he wants to get more involved in philanthropy and see how much good the Atlassian Foundation can do. With a $10 billion net worth each, the sky is the limit in Farquhar and Cannon-Brookes' desire to have a positive influence in the world.