How Oprah Winfrey Earned Her $3.2 Billion Net Worth

By Amy Lamare on January 25, 2019 in Articles › Billionaire News

Oprah Winfrey is everywhere. She is the Queen of all Media. She is a talk show host, actress, producer, pitchwoman, and philanthropist. Pretty much everything she touches turns to gold. That's not to say that she doesn't work hard for her success – no one works harder than Oprah. She is best known for her award winning, beloved, nationally syndicated talk show, which ran from 1986 to 2011. She is one of the wealthiest African Americans of the 20th and 21st centuries. She is definitely the most generous black philanthropist in U.S. history. At one time, she was the world's only African American billionaire. She's got a cable network, her acting career, her magazine, the shows she produces, and let's not forget her lucrative endorsement deal with Weight Watchers, to name just a few of her income streams. Oprah makes anywhere from $75 million to $300 million each year, which has given her an amazing net worth of $3.2 billion. What is even more amazing and inspirational about Oprah is that she is 100% self-made. She literally rose from rags to riches.

Oprah Winfrey was born in rural Mississippi on January 29, 1954 to a teenaged single mother named Vernita Lee. Oprah went to live on her grandmother's farm. Their family was so poor that Oprah literally wore potato sacks as dresses which drew ridicule from children in the neighborhood. When Oprah was six, her grandmother became ill, so she went to live with her mom and half-sister in a boarding house in Milwaukee, Wisconsin. The family subsisted on welfare and the earnings Vernita made cleaning houses. When Oprah was seven years old, she was sent to Nashville to live with her dad, Vernon Winfrey, and stepmother. This was a positive development as her dad and stepmom could not have children, so were thrilled to have her. 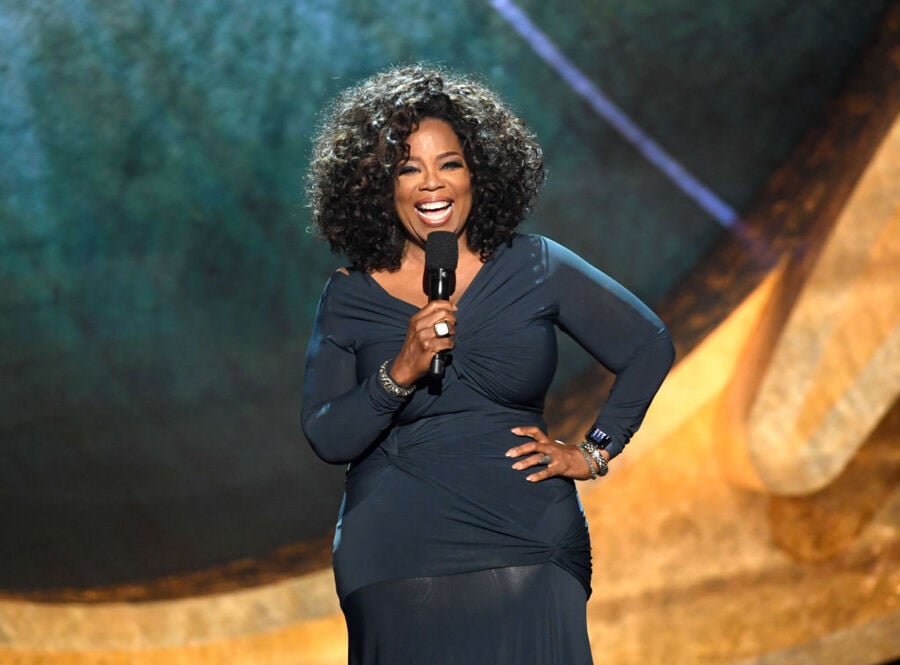 At the end of third grade, Oprah went to spend the summer with her mom, who had given birth to a boy while Oprah was in Nashville. When fall rolled around, Oprah chose to remain with her mom and half siblings. When she was 9 years old, her 19-year-old cousin raped her while he was babysitting her and her siblings. A few years later, she was sexually abused by her uncle. Then she was molested by a family friend. After years of systematic sexual abuse, Oprah ran away from home.

During early high school, Oprah was being bullied at school for being poor. As a result, she rebelled, stealing from her mother, dating older boys, and lying. Oprah's mother sent her to live with her dad again. Her father was strict and placed a lot of importance on education. Oprah began to thrive again. She was an honor student at her Nashville high school, was on the debate team, and was voted Most Popular. At 17, she was crowned Miss Black Tennessee.

In her senior year of high school, Oprah was hired by the local black radio station as a part time news correspondent. She worked there through her first two years of college. She left college at 19 to pursue a career in media. In 1983, Oprah moved to Chicago to host the morning talk show AM Chicago on WLS-TV.  She was an immediate hit. Her first airdate was January 2, 1984. Within a few months, she had brought the show's ratings from last place to highest rated talk show in Chicago. In September 1986, the show expanded to a full hour, renamed The Oprah Winfrey Show, broadcast nationally, and syndicated. Oprah Winfrey had finally made it.

We all know what happened next: Oprah basically took over the world.

In 1986, she founded Harpo Productions which allowed her to executive produce her show as well as be the majority owner of it. This meant she got the bulk of the profits. At the peak of The Oprah Winfrey Show, she made $300 million per year. She also made millions off the shows she produced for Rachel Ray, Dr. Phil, and Nate Berkus.

In 2011, she launched the television network OWN: Oprah Winfrey Network. It took her three years to really build the network into a successful outlet, but with her tenacity, she stayed the course and did it.

In 2015, Oprah Winfrey made a big investment in Weight Watchers. Her investment in the weight loss program gained 617% over the first 25 months, thanks in large part to Oprah's television commercials for Weight Watches attracting a new audience to the 55-year-old company.

There's a reason everything she touches turns to gold. She knows that success takes time, it does not happen overnight. She is well versed in the art of self-promotion. For some people, self-promotion comes easily. For others, it is intensely uncomfortable. However, it is necessary. If you don't champion your ideas, who will? Oprah is a master at this. Her entire brand is built around Oprah being Oprah (And YOU get a car! And YOU get a car!) In doing this, Oprah has kept her brand and its message very consistent.

Next, Oprah can school us in the art of the deal. She's always been good at making deals. She became a billionaire by negotiating the ownership of the Oprah Winfrey Show as well as a stake in the show's distributor. When Weight Watchers approached her about becoming a spokeswoman, she also bought stock in the company.

So yeah, Oprah Winfrey has a $3.2 billion net worth, and she worked her butt off for it.