How Much Money Have Jay-Z and Beyoncé Made During Their Careers To Date?

It goes without saying that Beyoncé and Jay-Z are one of the wealthiest couples in the world. They both have had epic careers and show no signs of slowing down. Jay and Bey earn a combined $100 million every single year from sales of records, touring, merchandise, endorsements, business ventures and more. When Jay-Z puts on a concert, each night grosses an estimated $1.5 million. When Beyoncé tours, she brings in more than $2 million a night. Needless to say, this couple has a crazy amount of money and we thought it would be fun to take a look at how much money Jay-Z and Beyoncé have made during their careers to date.

We'll start with Jay-Z . Jay-Z has come a long way since he dropped out of high school to be a drug dealer. The rapper was born Shawn Carter on December 4, 1969. He grew up in Bedford-Stuyvesant, a predominantly African American neighborhood in Brooklyn, New York. He and his three siblings were raised by a single mom in the Marcy Houses, a housing project so dangerous that shortly after Jay-Z left high school, the entire neighborhood was shut down. Jay turned to dealing drugs, primarily crack cocaine. He was shot a number of times. He's come a long way from those days.

In 1995, Jay-Z co-created Roc-A-Fella records with Damon Dash. Damon wanted Jay to film a music video immediately, except, Roc-A-Fella Records had no money. To raise cash, Damon sought an investment from a street hustler named Kareem "Biggs" Burke. Damon took Burke's $16,000 investment and poured it into producing a music video for Jay's song "In My Lifetime." The gamble paid off and soon Roc-A-Fella records' only artist was getting courted by all the major record companies. Unfortunately, none of the major labels would agree to one of Damon's demands. Damon wanted Roc-A-Fella to maintain ownership of Jay-Z's master recordings. Owning the master would turn out to be a brilliant financial decision as Jay-Z's back catalogue still sells millions of units, even more than 20 years later.

Damon and Jay also launched a clothing line called Rocawear. Sales exploded every time the products appeared in one of Jay's videos. In 2000, Rocawear's sales generated revenue of $50 million per year. Within a few years, Rocawear would expand to five different clothing and shoe lines and would generate $350 – $450 million per year in annual sales. In 2007, Jay-Z and Damon sold Rocawear for $204 million cash plus a potential $35 million stock bonus if the brand met certain targets over five years. At the time of the sale Rocawear was doing more than $700 million in annual retail sales. 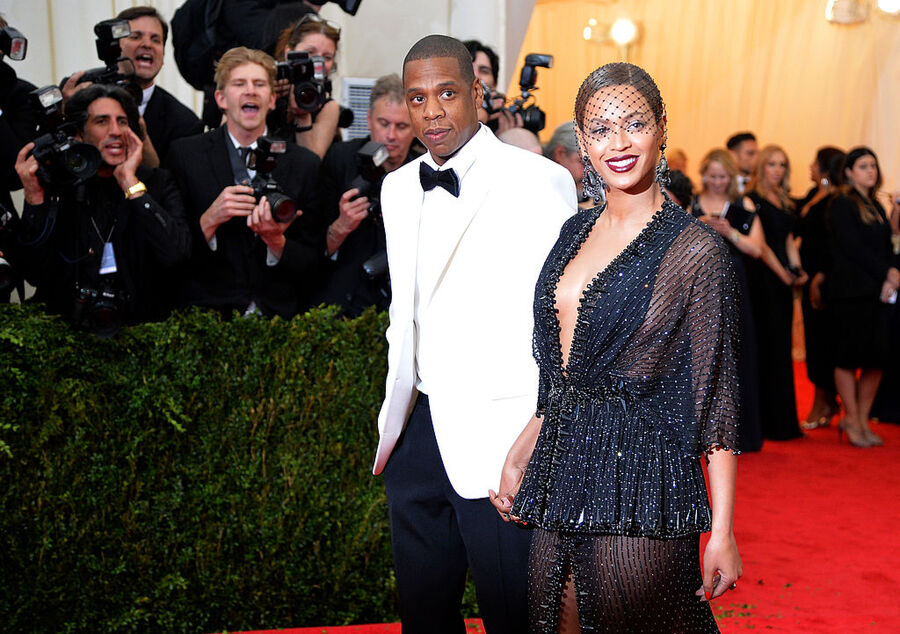 In 2004, Jay Z became the President of Def Jam Records. In a calculated move, Jay released a new album in 2006, "Kingdom Come."  The album went on to sell two million copies. He left Def Jam in early 2008, and spent the next year touring extensively, including becoming the first hip hop artist to headline the prestigious Glastonbury Festival.  From there, he launched his own record label, Roc Nation.

Since then, Jay-Z's life has been a whirlwind of producing, touring, curating, and recording He married Beyoncé  in 2008 and they had their first child, Blue Ivy, in 2012. In 2017, Beyoncé gave birth to the couple's twins Rumi and Sir. At age 49 and with $930 million in the bank, this high school dropout who once sold drugs has certainty made his mark on the world.

Beyoncé, on the other hand, was born in Houston, Texas on September 4, 1981. She first rose to fame in the 1990s as the lead singer of Destiny's Child. The group is one of the best-selling girl groups in history. The group took a hiatus in the early 2000s and Beyoncé took that opportunity to release her first solo album, "Dangerously in Love." That album debuted at number one on the US Billboard200 and earned Beyoncé five Grammy awards and two number one singles. In 2011, she released "4." In 2013, she released the critically acclaimed "Beyoncé." Her sixth album, 2016's "Lemonade," was her most personal work today. In 2018, Beyoncé released "Everything is Love," which was a collaborative effort with her husband. Beyoncé has sold over 100 million records as a solo artist and 60 million more with Destiny's child. She is one of the best-selling music artists of all time.

Like her husband, Beyoncé also has a number of business ventures outside of her music. Alongside her mother, she launched the fashion line "House of Dereon," which makes accessories, footwear, lingerie, shoes, jewelry, and sportswear. In 2014, she partnered with TopShop to produce an active wear line called Ivy Park. She bought TopShop out of their share of the partnership and today continues to produce and sell her Ivy Park line through a partnership with Adidas. Beyoncé also has a line of fragrances that have generated more than $500 million in revenue over the past decade. Her brand of fragrances is the most successful celebrity fragrance of all time.

Then, in 2018, Beyoncé signed a $60 million deal with Netflix to provide three pieces of content. The first one, the documentary Homecoming, about her 2018 Coachella performance, was released in April 2019. Beyonce has a net worth of $500 million.

We've been tracking Bey and Jay's combined income since 2007:

That $1.416 billion net worth is their earnings before taxes. It does not include the value of investments in real estate or businesses.

Additionally, with a solo net worth of $930 million, Jay Z is set to become the first billionaire rapper within the next year or so.

It truly is Jay and Bey's world. The rest of us just live in it.