How Much Has Jim Walton's Net Worth Grown From 1990 To Now?

The net worths of the wealthiest people in the world have been growing at crazy rates. Part of the growth, of course, is a direct result of the tech boom that has been gaining steam over the past nearly three decades. Just ten years ago, in 2010, the 10 richest people in the world had a total wealth of $269.8 billion. Today, they are collectively worth $742 billion. That's an increase of 175%!

Thirty years ago, in 1990, to make the list of the richest people in the U.S., one "only" had to be worth $260 million. Today, to be the poorest person on that list, you'd need a net worth of around $2 billion. In 1990, Jim Walton, then 42, had a net worth of $2.5 billion and was the 14th richest person in the U.S.  Today, Walton, 71, is worth $53 billion and he is the 10th richest American this year. He is one of seven Walton heirs to make the list of the 400 richest Americans. Alice Walton is the 11th richest, Rob Walton the 12th richest, Lukas Walton the 28th richest, Christy Walton the 58th richest, Ann Walton Kroenke the 67th richest, and Nancy Walton Laurie the 85th richest person in America. The Walton family is the wealthiest family in the world, with a combined $151.5 billion net worth.

The Walton family fortune comes, of course, from the family business. You may have heard of it. It is a little store called Walmart. The members of the Walton family are the retail behemoth's largest shareholders. The family holds more than 50% of the stock in the company. Today, Walmart is the world's largest retail company with stores all over the world. It is also the world's largest retailer by revenue, with $514 billion in sales, in its more than 11,000 stores across the globe. The Walton family's stake in Walmart paid out $3 billion in dividends in 2018. 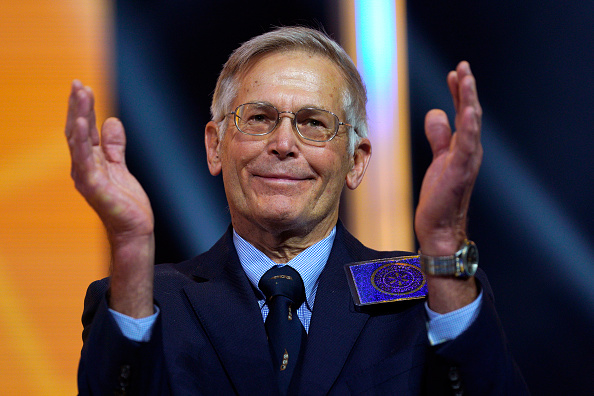 Sam Walton opened the first Walmart in Rogers, Arkansas in 1962. When Sam died in 1992, he left his stake in the company to his wife Helen and four children, evenly split. Today, roughly 50% of Walmart's equity is controlled by four people: Rob, Jim, Alice, and Christy Walton. When Sam died in 1992, he was running 1,735 Wal-Mart stores, 212 Sam's Club stores, and 13 Supercenters. Wal-Mart employed 380,000 people and earned an annual revenue of $50 billion.

Jim Walton is the third child of Sam and Helen Walton. He was born on June 7, 1948, in Arkansas. After graduating from Bentonville High School in 1965, he got his bachelor's degree in Business Administration and Marketing from the University of Arkansas in 1971. He was a member of the Lambda Chi Alpha fraternity while in college. In 1972, he joined Walmart's  real estate department. In 1975, he moved over to family-owned Walton Enterprises to serve as its president. He and his wife, Lynne McNabb Walton, have four children: Alice A. Proietti (born November 1979), Steuart Walton (born April 1981), Thomas L. Walton (born September 1983), and James M. Walton (born August 1987). The family resides in Bentonville, Arkansas.

In late September 2005, Jim replaced his brother John on the Walmart Board of Directors after John died in a plane crash in Wyoming. Jim currently is on the Strategic Planning and Finance committees of Walmart. He was CEO of family-owned Arvest Bank until he became Chairman of Arvest Bank. He is also Chairman of newspaper firm Community Publishers Inc. (CPI) owned by Jim Walton himself (but founded by his father Sam Walton after acquiring the local newspaper the Benton County Daily Record).

How has Jim Walton's net worth grown since 1990? Look around. There's practically a Walmart on every corner.  Every year when Walmart issues a dividend, Christy, Alice, Rob, and Jim split roughly $3.2 billion. That's roughly $800 million in cash per person – per year. Direct deposited into their respective bank accounts. The four Waltons' combined net worth has more than doubled since 2007 alone. 81% comes from their Walmart holdings, the remaining wealth comes from dividend payments, stock sales, and various other personal investments and assets. Today, Walmart has 11,503 stores and clubs in 28 countries. Walmart is also the largest private employer in the world, with 2.2 million employees.