Australian Gina Rinehart is the 89th richest person in the world and the ninth richest woman. She is a mining mogul who makes a billion dollars a year from the iron ore and coal projects she owns through the company she inherited from her father. Pretty cut and dried, right? Well, Ms. Rinehart has had a fair bit of family drama over the years. In 1992, an Australian mining magnate named Lang Hancock died suddenly at the age of 82. According to his will, Hancock's entire business empire was left in a trust that was to be controlled by his only daughter, a then 38-year-old single mother of four named Gina Rinehart. This meant that Gina instantly inherited a mining empire that was basically bankrupt. Thanks to Gina's innovations and an explosion in commodity prices, over the next 28 years, Gina's personal wealth has increased to $12.7 billion. But it hasn't always been easy. During those 28 years, Gina has been sued by her stepmother, a personal biographer, and several of her own children. Gina Rinehart's rise to become the richest person in Australia has definitely not been dull. But first, some background…

Gina's father Lang Hancock was born into one of Australia's largest land-owning families in April of 1909. One day in late 1952, Lang and his wife were flying over a rural area of Western Australia called Pilbara on their way to Perth in a small private plane. Bad weather forced him to re-route the plane over a particularly rugged section of terrain. While flying through, Lang noticed the nearby mountain walls appeared to be made up of what looked like solid iron ore. He moved quickly to purchase hundreds of acres of the land he hoped might indeed contain the iron ore he spotted from the plane. Unfortunately, at the time Australia actually did not allow the exportation of iron ore, so there wasn't a lot he could do with his land. Over the next nine years, Lang and his newly founded company Hancock Prospecting lobbied the Australian government to lift the ban. They were finally successful in 1961 and, as it turns out, Lang had actually stumbled upon the single largest iron ore deposit in the history of the world. As we mentioned earlier, over the next thirty years, Lang's empire grew and his personal net worth eventually topped $125 million. 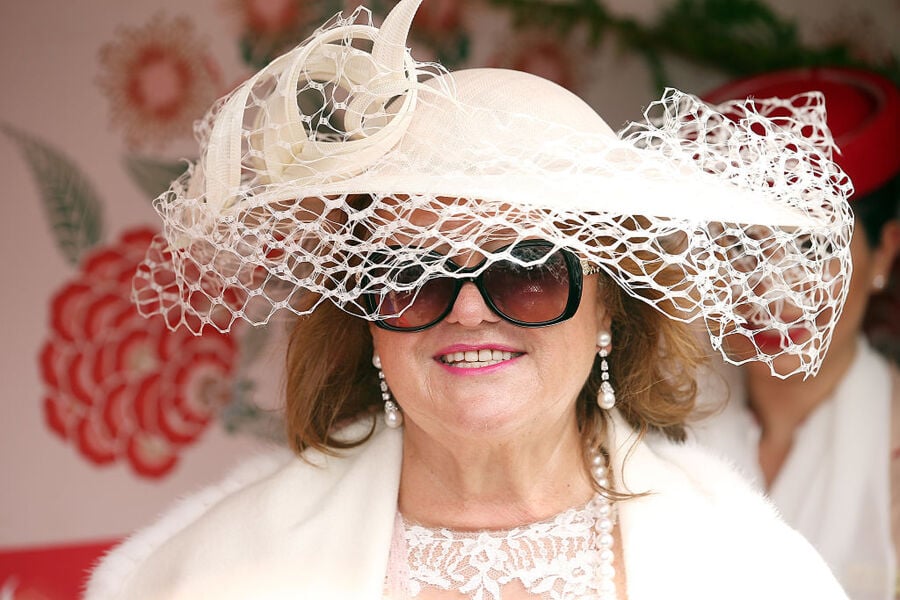 Gina was born on February 9, 1954, in Perth. She is the only child of Hope and Lang Hancock. She attended St. Hilda's Anglican School for Girls in Perth. She dropped out of the University of Sydney to go work for her father. At the time, the family business was nearly bankrupt. It was Gina who rebuilt Hancock Prospecting and turned it into one of the most revenue-producing and valuable companies in Australia. On a personal front, Gina has been married twice and has four children. Gina met Englishman Greg Milton in 1973 when she was 19 years old. They married and Milton changed his last name to Hayward. Their son John was born in 1976 and daughter Bianca was born in 1979. Gina and Greg divorced in 1981. In 1983, Gina married a corporate attorney named Frank Rinehart in Las Vegas. They had two daughters, Hope and Ginia, born in 1986 and 1987. Frank died in 1990.

Then, in 1992, Lang Hancock died unexpectedly at the age of 82. The official autopsy revealed that he had heart disease. However, Gina felt that her father's wife, Rose Porteous, had nagged Lang to death. In the last few days of Hancock's life, Porteous had attempted to pressure him into changing his will and Hancock eventually took out a restraining order against her. According to his will, the majority of Lang's business interests were left in a trust for his daughter Gina and her children. By doing this, Lang specially excluded his third wife Rose from the mining empire. Rose was furious to discover she was cut out of her husband's will. The mutual hatred between Lang's only child Gina and his third wife Rose set off a bitter legal battle that lasted 14 years and cost tens of millions of dollars.

Unfortunately, this isn't the only bitter feud in her family. Gina has been sued several times by her own children over control of Hancock Prospecting. In 2003, Rinehart had a falling out with her son, John, and he changed his surname to Hancock. His sister, Bianca, was slated to take over the family business from her mother, but she was replaced in 2011 by her half-sister Gina at their mother's direction. Gina hasn't attended any of her children's weddings. Gina Rinehart's life is never dull.

It all started in 2013, when Rinehart's daughter, Hope Welker, sued her mother over her decision to extend her ownership and control of the family trust by 57 years, to 2068. Gina Rinehart would be 114 years old. Hope Welker settled for $45 million. Rinehart's two eldest children, John and Bianca, continued the fight. They eventually won the lawsuit and were given control over the $3 billion trust. Bianca was made the new trustee of the family trust. According to her children, Gina had orchestrated an elaborate ploy that included convincing their accountants into giving her children false information about the trust. The kids allege that they were told that they would be responsible for elaborate capital gains taxes if they took away control of the trust from their mother. The accounting firm told Bianca that she would have to pay $142 million in capital gains taxes. That was simply not true. It was all an attempt by Gina to keep her kids from rightfully assuming control of the family trust.

Gina lives a very lavish lifestyle complete with lavish mansions in several Australian cities. Her Perth mansion alone is worth $25 million. She has a fleet of cars and travels the world in her luxurious custom-made private jet. Philanthropically, Rinehart is passionate about women's causes. She single-handedly funded the construction of an orphanage in Cambodia and sponsors the education of many poor girls around the globe.