How Generous Are America's Billionaires?

By Amy Lamare on November 29, 2018 in Articles › Billionaire News

The wealthiest American billionaires in the United States have net worths that are hard for normal people to comprehend. I mean, come on, Jeff Bezos has $136 billion. Bill Gates has $96 billion. It stands to reason that billionaires have a lot more disposable income to buy mansions and jets and super yachts. They also have a lot more money to donate to charity. Many billionaires have joined The Giving Pledge, which was founded by Bill Gates and Warren Buffett. Members of the Giving Pledge vow to donate at least half their net worth to charity during their lifetime.

Other billionaires, like Chuck Feeney, take it one step further. Feeney founded the chain of stores Duty Free Shoppers and once had a net worth of $7.5 billion. One day, he decided that he was going to go broke by the time he died. Today, Feeney has a net worth of $1.5 million. He directly inspired Gates and Buffett to start The Giving Pledge. Mark Zuckerberg is a member, as is Spanx founder Sara Blakely, Home Depot founder Arthur Blank, AirBnb's Nathan Blecharczyk, Brian Chesky and Joe Gebbia; Paul Mitchell founder John Paul Dejoria, Oracle's Larry Ellison, Sheryl Sandberg, Groupon's Eric Lefkofsky, Elon Musk, eBay founder Pierre Omidyar… and so on. You know who isn't a member of The Giving Pledge? Amazon founder Jeff Bezos and most of the American hedge fund billionaires. 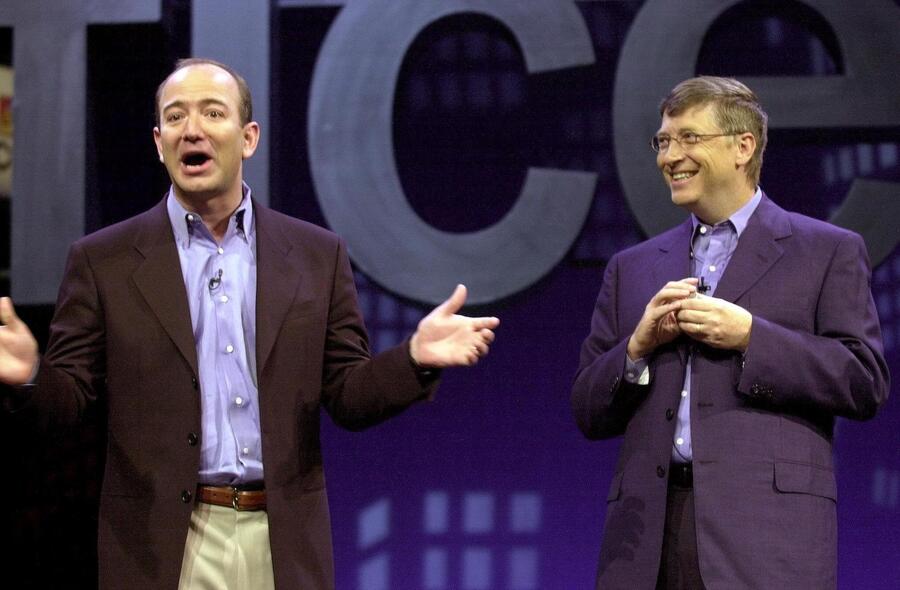 Below is a list of 28 of the wealthiest Americans ranked by how generous they are with philanthropic donations. We've calculated this list based on how much each person has given away over their lifetimes, as well as the percentage of their fortune they've donated. A value of 1 to 5 is assigned to each, with 5 being the most philanthropic. Bill Gates is the second wealthiest man in the U.S. (and the world) and received a ranking of 5. He has given away about 27% of his fortune. On the other hand, Jeff Bezos only gets a 2 despite being the richest man in the world. It should be noted that Bezos recently donated $2 billion to help the homeless. If that was distributed immediately, rather than over time, he would have gotten a 4.

The "least" generous: The 1

Room for Improvement: The 2s

Middle of the Pack: The 3s

The Givers: The 4s

The Cream of the Crop: The 5s